A dead monkey was found in a shipping container in Whāngārei, New Zealand this month.A staff member at BBS Timbers discovered the dehydrated monkey body squeezed between sawn timber packs upon opening the fumigated container, which had arrived from Guyana.The facility alerted Biosecurity New Zealand, which advised how to remove the monkey. A biosecurity officer followed up with an inspection and picked up the body for disposal.The monkey body was in a poor condition. The species has not been identified."The whole response worked extremely well.

U.S. offshore vessel owner Seacor Marine  has acquired of three fast support vessels (FSVs) in exchange for the private placement of 603,872 shares of its common stock to domestic U.S. holders affiliated with the McCall family of Louisiana.The provider of global marine and support transportation services to offshore oil and natural gas and windfarm facilities worldwide has operated the acquired vessels for the past ten years under a revenue sharing pooling agreement along with four of its owned FSVs of similar specification.As part of the transaction, this pooling agreement was terminated.

The American Caribbean Maritime Foundation (ACMF) announced it received a contribution of $150,000 from Mr. and Mrs. Roland Malins-Smith. Mr. Malins-Smith, now retired, is founder of SeaFreight Line Ltd. which was acquired by Crowley in 2015.The ACMF funds scholarships and provides grants for classrooms and other facilities at the Caribbean Maritime University (CMU).Malins-Smith, born in Grenada, began his career in 1970 researching shipping and transportation issues for the then Caribbean Free Trade Area (Carifta) Secretariat based in Georgetown Guyana.

German shipping group Oldendorff Carriers is stopping its business in Guyana, the company said on Friday, after the United States blacklisted Russian aluminum producer Rusal, which has a plant in the South American country.The United States on April 6 imposed sanctions against Russian entities and individuals to punish Moscow for its alleged meddling in the 2016 U.S. election and what the U.S. Treasury Department dubbed other "malign activity".Since then, the world's two biggest…

Guyana's Minister of Natural Resources, Raphael Trotman said while there is no perfect contract, the government is comfortable with the terms and conditions spelt out in the Stabroek Petroleum agreement between itself and ExxonMobil and prefers a long-term, stable relationship with one exploration company rather than several. “We recognised that we had with us a company that had made a discovery, had a binding contract with the government and people of Guyana which had been signed in 1999…

Hess Corporation has entered into an agreement to sell its interests in offshore Equatorial Guinea to Kosmos Energy and Trident Energy for a total consideration of $650 million, effective January 1, 2017. “This sale is a further step in our strategy to focus our portfolio by investing in higher return assets and divesting more mature, higher cost assets,” CEO John Hess said. “Proceeds from asset sales, along with cash on our balance sheet, are expected to fund the development of our truly world class investment opportunity offshore Guyana.

Warning on Hazards of Carrying Bauxite by Ship

A new warning that bauxite may become unstable when carried in bulk on a ship, potentially causing the vessel to capsize, has been issued by the International Maritime Organization (IMO). Bauxite is one of the world’s major sources of aluminium with around 100 million tonnes transported annually by sea. In 2015, a bulk carrier sank while transporting bauxite, with the loss of 18 seafarers. Research presented this week to an IMO Sub-Committee found that certain forms of bauxite…

The captain and first officer of an ocean going tug boat have been found guilty of drug trafficking following the biggest ever U.K. seizure of class A drugs, the country’s National Crime Agency (NCA) announced. The cocaine, worth an estimated potential street value of £512 million once adulterated, was found hidden aboard the Tanzanian flagged MV Hamal in April 2015. The vessel had been intercepted by the Royal Navy destroyer HMS Somerset and Border Force cutter HMC Valiant in the North Sea approximately 100 miles off the coast of Aberdeenshire.

French container line CMA CGM has announced imminent changes to its PCRF line service which links Northern Europe with the French West Indies, by adding two new calls at Zeebrugge and Rotterdam and increasing freight capacity on the route. The company says this will mean customers will benefit from the enhanced import and export cargo opportunities. During the first quarter of 2016, PCRF line’s capacity which links the French West Indies to Europe will be increased by replacing current 2,200 TEU capacity vessels by 2,800 TEU capacity vessels.

The CMA CGM Group Informed that the CMA CGM MARSEILLE – 2nd vessel of its GUYANAMAX 3 - vessels series – was delivered in South Korea on July 29th. This 2,100 TEU containers capacity vessel – including 530 Reefer containers – is 190 meters long and 30 meters wide. It was built by the Korean shipyards Hyundai Mipo Dockyard and will be sailing under the UK flag. The CMA CGM MARSEILLE will be positioned on the North Europe French Guiana North Brazil (NEFGUI) line. This 42-days rotation joins directly North of Europe, the Caribbean, French Guyana and North Brazil each week.

Unlike almost all its neighbors, Guyana isn’t an oil producer yet. But the energy giant Exxon Mobil recently announced it had discovered “significant” oil off the coast. The discovery could put Guyana on oil and gas Map and the country could become a player in the oil marketplace. However, it will take months to ascertain the size and commercial potential of this discovery. And there could be issues, as the waters also claimed by Venezuela as part of a long-running border dispute between the South American countries.

In the past 7-days the following attacks were noted by the International Chamber of Commerce, Commercial Crimes Services. Two robbers armed with long knives boarded an anchored bulk carrier via the anchor chain. Duty crew noticed the robbers and raised the alarm. All crew mustered and rushed to the forecastle. On seeing the crew alertness, the robbers escaped empty handed in their speed boat. About six robbers in a speed boat approached and boarded a barge under two, stole barge properties and escaped.

To date, the following reports were noted by ICC Commercial Crime Services (CCS), the anti-crime arm of the International Chamber of Commerce. 09.01.2013: 0920 UTC: Guyana, South America. Two robbers armed with guns and long knives boarded a berthed LPG tanker from the offshore side by using a grappling hook. They took the C/O and shore security guard as hostage, proceeded to the master’s cabin and stole ship’s cash and escaped. No injury to crew. 08.01.2013: 0750 UTC: Posn: 12:40.2N - 043:16.1E, Bab El Mandeb TSS, Red Sea. 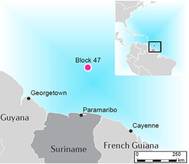 Statoil has acquired a 30% participating interest in block 47 offshore Suriname from Tullow Oil. Tullow Oil operates the block 47 licence offshore Suriname with 100% working interest. Tullow will retain the operatorship and 70% working interest. The agreement is subject to approval from Staatsolie Maatschappij Suriname, the state oil company of Suriname. Block 47 lies in a frontier area in the Guyana Basin. The licence is located some 270 kilometres north of mainland Suriname, with a water depth of between 1,300 and 3,000 metres.