GoodBulk, an owner and operator of dry bulk vessels, announced that it has filed a registration statement on Form F-1 with the United States Securities and Exchange Commission (SEC) relating to a proposed initial public offering (IPO) of its common shares.Morgan Stanley and Credit Suisse are acting as lead book-runners, Clarksons Platou Securities, Evercore ISI, Pareto Securities and UBS Investment Bank are also acting as book-runners, and ABN AMRO is acting as co-manager for…

Euroseas Spins Off Its Drybulk Fleet

Greece-based owner of containerships and bulk carriers Euroseas has spun off its drybulk fleet into a separate company. The Company announced that it filed a registration statement on Form F-1 with the Securities and Exchange Commission to spin-off the Company's drybulk fleet into a separate company, EuroDry Ltd., which has applied for listing on the NASDAQ Capital Market. "We believe that separate drybulk and containership investment options will give our shareholders the flexibility to adjust their holdings, if they so wish, between the two sectors,: he added.

All Aboard for Hedge Funds as Trade Tide Lifts Shipping

Forced to abandon ship after mistiming their investments five years ago, hedge funds are venturing back in a bid to profit from growing global trade flows. Around 90 percent of traded goods by volume are transported by sea and global shipping sectors, including dry bulk, are on course for a recovery this year after a near-decade long crisis, ratings agency S&P said in a report last week. The IMF has forecast GDP growth at 3.9 percent for 2018 and 2019 versus 3.7 percent last year, which analysts say is boosting sentiment for shipping. 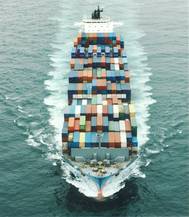 Shares of U.S. shipping companies shot higher again on Wednesday, causing volatility halts in a number of stocks and raising questions among investors and analysts over the extent of their sharp post-election rally. The jump in share prices and unusually heavy trading volume even surprised analysts who follow the stocks, although some said the gains appeared to result in part from optimism that commodity demand would increase under President-elect Donald Trump. At the center of the rally has been DryShips Inc…

BlackRock Inc is planning to unveil a new U.S.-listed exchange-traded fund that will invest in all areas of the junk-bond market except the tattered energy sector, the asset manager said in a regulatory filing this week. The first-of-its kind fund, iShares iBoxx $ High Yield ex-Energy Corporate Bond ETF, will come after a sharp decline in oil prices that has routed higher-yield bonds. The ETF will track a Markit-brand index containing lower-rated corporate debt except those bonds issued by oil and gas producers, as well as suppliers of equipment and services to that industry.

iii) Knowledge by Petrobras, the December 3, 2014, the statements given in the context of the collaboration agreement awarded Mr. Julio Gerin de Almeida Camargo (Toyo Group) and Mr. iv) Citation Petrobras, the December 9, 2014, relating to collective action (class action) filed by Mr. Peter Kaltman court in the US (United States District Court, Southern District of New York). We believe that other actions possibly be consolidated with the action of Mr. v) Filing by the Federal Public Ministry…

Some of the hedge fund industry's most respected firms made bigger bets on a wide swatch of energy companies during the third quarter only to watch the stocks get pummeled by falling crude oil prices. Robert Citrone's Discovery Capital Management raised its holding in Texas oil driller Diamondback Energy by 20 percent to own 1.4 million shares at the end of the third quarter, according to a regulatory filing made with the Securities and Exchange Commission. Diamondback's stock price fell 16 percent over the quarter.

Descartes Systems Group today announced the commencement of a marketed, underwritten public offering of 9,500,000 Common Shares. The underwriters will also have the option, at any time not later than the 30th day after the filing of the final prospectus supplement, to purchase up to 1,425,000 additional Common Shares on the same terms and conditions, to cover their over-allocation position, if any. Completion of the offering is subject to market conditions and approval by the Toronto Stock Exchange.

DCT Gdansk will appoint Adam Zolnowski, who until recently was responsible for strategy and corporate affairs, as Chief Financial Officer with the beginning of April. Prior to his career in DCT, Adam was a Director at Pricewaterhouse Coopers, where areas of his responsibility included foreign investment. Adam was a member of Polish Securities and Exchange Commission, President of Polish Information and Foreign Investment Agency as well as  Director General of the Polish Competition Authority. He is an author of several publications in the field of economy, foreign investment and competition.

Opportunity to Invest in Box Ship

Greece-based Box Ships Inc. intends to offer $25,000,000 of its common shares in an underwritten public offering. The net proceeds of the offering are expected to be used by the Company for general corporate purposes, which may include the repayment of debt and the acquisition of vessels. The Company intends to grant the underwriters a 30-day option to purchase an additional $3,750,000 of its common shares to cover over-allotments, if any. This offering is being made only by means of a prospectus supplement and accompanying base prospectus.

DryShips Inc. (NASDAQ: DRYS), or the Company, an international provider of marine transportation services for drybulk and petroleum cargoes, and through its majority owned subsidiary, Ocean Rig UDW Inc., or Ocean Rig, of offshore deepwater drilling services, has announced it is offering 5,000,000 common shares of Ocean Rig that it owns in an underwritten public offering pursuant to Ocean Rig's effective shelf registration statement on Form F-3ASR filed with the Securities and Exchange Commission.

Greece's Nautilus Marine Acquisition Corp. (Nautilus) extends tender period referring to the acquisition of Assetplus Ltd. The tender offer, as amended, has been extended until 5:00 p.m., New York City time, on February 13, 2013, unless further extended or earlier terminated. The tender offer was previously scheduled to expire at 5:00 p.m. New York City time, on January 31, 2013. The completion of the tender offer is a condition to Nautilus' previously announced acquisition of Assetplus Limited.