After nine months of dredging, Jan De Nul Group has reached an important first milestone by completing the deepening of the 95 km long access channel to the port in record time.The Municipality of Guayaquil (Ecuador) officially inaugurated its newly deepened maritime access channel last weekend, by welcoming the first Neo-Panamax vessel APL Esplanade in the port.Jan De Nul Group will now operate and maintain the channel under this 25-year concession contract. The total investment…

Luxembourg-based maritime construction engineering company Jan De Nul announced its decision to opt for 100% renewable fuels."Jan De Nul Group carries out dredging work in the Benelux with 100% renewable fuel. With this, the world player is further committing itself to immediately and considerably reducing its CO₂ emissions," said a release.Trailing suction hopper dredger Alexander von Humboldt will from now on sail on renewable biofuel from certified and sustainable waste streams.The choice of 100% renewable fuel is part of the ambitious CO₂ reduction objectives of the Jan De Nul Group.

Jan De Nul group of the beginning of work on dredging and expansion on an internal ship canal and a turning circle in port of Nouadhibou (Mauritania), one of the largest centers through which iron ore from the country is exported, is told in the group message.With the deepening and widening of the 25-km long entrance channel to the mineral terminal of Port of Nouadhibou, the National Industrial and Mineral Authority of Mauritania (Société Nationale Industrielle et Minière or SNIM) opens the port for vessels with a capacity of up to 250…

Jumbo reports completion of a shipment of the "heaviest, tallest and the largest diameter "Transition Pieces (TP’s) it has ever transported.The TP’s were shipped for Jan De Nul Group in cooperation with brokers Multi Marine Chartering B.V. from Laem Chabang to Taichung, where they will form part of Taiwan’s Formosa 1 Phase 2 Offshore Wind Farm (OWF).The Formosa 1 OWF will have a total capacity of 128MW once built and commissioned. Phase 1 of Formosa 1 features two Siemens 4MW demonstration turbines, the first ever wind turbines to be installed off Taiwan.

Jan De Nul Group’s subsidiary Payra Dredging Company Limited (PDCL) entered into a concession agreement with Payra Port Authority (PPA) for the capital and maintenance dredging of the Rabnabad Channel at Payra Port. This Public-Private Partnership (PPP) contract was awarded end 2017. The official signing ceremony took place today at the Ministry of Shipping of the People’s Republic of Bangladesh in Dhaka.Under this agreement, Jan De Nul Group will be responsible for the development…

Keppel Offshore & Marine Ltd (Keppel O&M)'s wholly owned subsidiary Keppel Singmarine Pte Ltd (Keppel Singmarine) has secured contracts from Jan De Nul Group to build three Trailing Suction Hopper Dredgers (TSHDs). The TSHDs are worth about S$100 million in total. The first two dredgers are expected to be completed in 2H 2018 while construction of the third dredger will require a notice within six months from Jan De Nul to exercise the option for the dredger. To be built to Jan De Nul's design…

Jan De Nul Group signed a contract with Dong Energy from Denmark for the transport and installation of 36 monopiles and transition pieces for the offshore wind farm Borkum Riffgrund 2 in German territorial waters. Additionally, the Group was also awarded the supply, transport and installation of scour protection for all foundations. The offshore wind farm Borkum Riffgrund 2 is located in the North Sea, within the German Exclusive Economic Zone (EEZ), at 17 km east of the border with the Netherlands, 34 km north of the island of Borkum and 50 km north-west of the German mainland.

The dredging and maritime management company Jan de Nul Group signed the acquisition of the offshore facility vessel Vidar, which previously worked for the German company Hochtief. The facility vessel Vidar, which is less than two years old, was specially built for installing offshore wind farms at sea and is one of the largest of its kind in the world. “With the Vidar in our fleet we considerably extend our specialized services for the installation of offshore windparks,” says Peter De Pooter, Manager Offshore Renewable at Jan De Nul Group.

Authorities in Panama began on Monday filling up the Panama Canal's new Pacific locks. Water for the locks is coming from Miraflores Lake, the Panama Canal authority (ACP) said. Three electric pumps will each move 30,000gl of water per minute and 15 diesel pumps 7,000gl each per minute. The locks will take around five days to fill. The filling and subsequent testing of the new Pacific locks is expected to take about 90 days to complete. The expansion project is 89.8% complete, ACP said.

Belgium-based dredging and marine construction giant Jan De Nul Group has ordered two 6,000 ton Subsea Rock Installation vessels at AVIC Weihai shipyard in Weihai, China. The vessels will be able to install rock at depths up to about 600 m by means of a flexible fall pipe. An inclined fall pipe will enable accurate rock installation around structures such as offshore wind turbine foundations and oil & gas platforms. The vessels will also act as a support vessel for a subsea trencher, for the burial of cables.

The Panama Canal Authority (ACP) said that Grupo Unidos por el Canal. S.A. (GUPC) has resumed work on the new locks project during the afternoon of Thursday, February 20. “Works have restarted this afternoon,” said Panama Canal Administrator Jorge L. Quijano. Since works have resumed, ACP will proceed to pay tomorrow GUPC the $36.8 million due for December invoices. This preliminary agreement to resume works does not imply a negotiation on the alleged cost overruns claimed by the contractor. ACP reiterates that these claims must be process through the mechanisms within the contract. 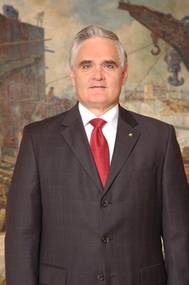 The ACP demanded today that Grupo Unidos por el Canal (GUPC), the consortium in charge of the construction of the third set of locks, resume work on the project as required by the contract. GUPC is formed by the companies Sacyr Vallehermoso, S.A (Spain), Impregilo, S.p.A. (Italy), Jan de Nul Group (Belgium) and Constructora Urbana, S.A. (CUSA) (Panama). After two weeks of negotiations, which saw production levels drop to 25%, almost all activity has ceased. The Canal Administrator…

Goltens, the US based global engine repair and retrofit expert, overhauls 3 engines from the 'Leonardo Da Vinci', owned by the Jan De Nul Group. The dredger, which has over 20,000 KW installed diesel power, required a full overhaul and reconditioning of its three main engines. Work was carried out at Al Duqm shipyard in Oman and was completed within a demanding schedule of three weeks. This project was part of Goltens’ ongoing cooperation with Denis Diesel Services. The two companies work together on a number of projects, in particular those related to large diesel overhauls on dredgers.

Jan De Nul Group announce important contracts in Indonesia, Russia and Australia, and new giant dredger due soon from builders. In Indonesia an offshore island will be reclaimed. These works are a part of a large scale reclamation development north of Jakarta, where a 260 ha island is developed for Kapuk Naga Indah and designed for housing and recreation. One of Jan De Nul Group’s jumbo trailing suction hopper dredgers will be deployed. In Russia, Jan De Nul Group has signed a contract for the dredging works for the first phase of the Yamal LNG project.

Jan De Nul Group to supply a 5,400 tonnes capacity cable turntable to offshore handling systems specialist Caley Ocean Systems. The turntable, including a 5 tonnes and 10 tonnes deck tensioner, is destined for the vessel Willem de Vlamingh. In addition to this turntable, Caley is supplying a modular loading tower assembly comprising loading arm, inboard chute, and control cabin. In the first quarter of 2013, Willem de Vlamingh will be being outfitted for cable laying offshore…