COVID-19 has hit the vehicle carrier market hard. The world vehicle demand has dropped by c.35%. Consequently, shipping these vehicles has fallen considerably.The only order to take place earlier this year is one from NYK line for a large LCTC for $95 million.No deals have taken place since the beginning of the year, this is a figure we have not seen historically. A break of five months on the S&P side of things in the Vehicle carrier market. One of the main reasons for this low period and a fall in the values is the drop in rates for the 6…

The Panama Canal Authority (ACP) held Tuesday a public hearing on the proposed modifications of its toll structure which culminated the period for receiving inquiries from the industry.The agency of the government of Panama responsible for the operation and management of the Panama Canal recently published a proposal to modify its current tolls structure for the dry bulk, passenger, containership, vehicle carrier and RoRo segments, as well as tankers, chemical tankers, LPG and LNG vessels…

Companies are leaving Britain's shipping registry due to uncertainty over Britain's departure from the European Union and future commercial arrangements with the bloc, industry officials say.All commercial ships have to be registered, or flagged, with a particular country partly to comply with safety and environmental regulations. Shipping companies in many so-called "flag states" pay corporation tax based on vessel tonnage rather than profit.Britain's ship registry forms part…

The Panama Canal published a proposal to modify its current tolls structure for the dry bulk, passenger, containership and vehicle carrier and RoRo segments, as well as tankers, chemical tankers, LPG and LNG vessels, the intra-maritime cluster (local tourism segment) and minimum tolls (small vessels).According toa press release from the Panama Canal Authority (ACP), the announcement marks the beginning of a 30-day formal consultation period for industry feedback, which will close on July 15…

Vehicle imports and exports at Port Canaveral revved up this week with the arrival and departure of the post-Panamax (PPX) shipping vessel Höegh Trotter and another RO/RO vessel, the NYK Auriga Leader. In a first for the port, one vessel discharged new autos while another exported vehicles.Höegh Autoliners’ massive Höegh Trotter, the third PPX vessel to visit the Port, discharged new autos at the 16-acre AutoPort Canaveral, LLC facility as the nearby Auriga Leader loaded vehicles…

A new class of post-Panamax (PPX) vessel made its first visit to Port Canaveral, marking the second time this year a vehicle carrier megaship of this size has called on the port. Launched in 2017, the MV Donington PPX roll-on/roll-off (Ro/Ro) vessel arrived at Port Canaveral as part of its inaugural U.S. itinerary. With its 125-foot beam and capacity to transport over 7,400 vehicles, the Donington is Hoegh Autoliners’ largest Post-Panamax vessel to call on the port. The ship arrived at Port Canaveral, its second U.S. port of call after delivering vehicles to Port Freeport in Texas last week.

Port Canaveral staff were on hand to welcome the captain and crew of the Höegh Sydney roll-on/roll-off (RO/RO) vessel on her inaugural visit to the Port. The Sydney’s arrival at Port Canaveral is the first U.S. port call for the vessel on a transit that originated in East Asia. The Höegh Autoliners vessel represents the fourth vehicle carrier to call on Port Canaveral and the first auto imports to arrive direct from Asia. More than 800 cars destined for Florida, Georgia, Tennessee… 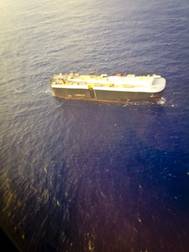 A multiagency rescue operation to help a seriously ill merchant sailor aboard a cargo ship in the Pacific Ocean was cancelled Wednesday morning after the man was declared deceased, the U.S. Coast guard announced. Tuesday, at approximately 9:50 a.m., the 11th Coast Guard District Command Center received a report of a sick U.S. citizen aboard the Green Ridge, a 600-foot vehicle carrier, approximately 1,000 miles west of San Diego. The command center requested assistance from the…

Two shipping companies and their masters have been prosecuted by the Australian Maritime Safety Authority (AMSA) for two separate marine pollution incidents within the Great Barrier Reef. Tokyo based Perses Maritima Ltd and the master of its Japan registered vehicle carrier Asteria Leader were found guilty on May 18 in the Brisbane Magistrates Court on one charge each of illegally discharging garbage under the Protection of the Sea (Prevention of Pollution from Ships) Act 1983.

The Australian Maritime Safety Authority (AMSA) has prosecuted two shipping companies and their masters for two separate marine pollution incidents within the Great Barrier Reef. Tokyo based Perses Maritima Ltd and the master of its Japan registered vehicle carrier Asteria Leader were found guilty on May 18 in the Brisbane Magistrates Court on one charge each of illegally discharging garbage under the Protection of the Sea (Prevention of Pollution from Ships) Act 1983. A routine…

AML Ship Management GMBH, a German company, was sentenced in federal court today to pay a total of $800,000 in fines and community service payments for violating the Clean Water Act and the Act to Prevent Pollution from Ships by intentionally discharging 4,500 gallons of oily bilge water into the ocean off the coast of Alaska and then presenting false records to the U.S. Coast Guard. AML was also ordered to implement a comprehensive Environmental Compliance Plan and was placed on probation for three years.

U.S. Attorney Karen L. Loeffler announced  that AML Ship Management GMBH, a German company, and Nicolas Sassin, Chief Engineer of a vehicle carrier ship it operated, the M/V City of Tokyo, were both charged with knowingly dumping oil into United States’ waters off the coast of Alaska in August 2014 in violation of the Clean Water Act. AML and Chief Engineer Nicolas Sassin have also been charged in separate cases filed in the District of Oregon with violating the Act to Prevent Pollution from Ships (APPS) for knowingly creating and presenting false records to the U.S.

The Panama Canal Authority (ACP) met with the Japanese Shipowners Association (JSA) and several car manufacturers in Japan as part of the ongoing discussions with the vehicle carrier segment on the Expansion Program’s progress and future toll structure upon its completion. During the meetings, the Panama Canal provided an update on the Expansion Program and presented the analysis of the results for the potential pricing structure for the car carrier segment taking into account the feedback received recently from this group.

The Marine Environment Protection Committee (MEPC) of the International Maritime Organization (IMO) met for its 65th session from May 13-17 2013, at IMO Headquarters in London. The committee made significant progress in its work on further developing energy-efficiency regulations; adopted an MEPC resolution on rromotion of technical cooperation and transfer of technology relating to the improvement of energy efficiency of ships; and gave the go-ahead to carry out an update to the greenhouse gas (GHG) emissions’ estimate for international shipping.

Government of Panama approves canal tolls increases effective Ocober 2012. The Government of Panama has approved the proposal to restructure and apply selective increases in the Panama Canal pricing system, effective from 1 October 2012 to 1 October 2013. There will also be changes to tolls applicable to small vessels, based on vessels' length, to incorporate adjustments not previously considered. The remaining segments will not be adjusted at this time, nor will the price per TEU for containers carried onboard a vessel.

The NATO Shipping Centre reported that on Jan. 30 the vehicle carrier Asian Glory (Blue hull and white superstructure), previously hijacked and still under pirates control, was in position 04:19N - 052:13E CO:005 SPEED 14. It is assessed pirates are using Asian Glory for their pirate activities. All vessels navigating in the Indian Ocean to consider keeping east of 60E when routing north/south and to consider routing east of 60E and south of 10S when proceeding to and from ports in South Africa, Tanzania and Kenya.

In the late afternoon of 1 January, UK Flagged M/V Asian Glory (a vehicle carrier) owned by Zodiac Maritime Agency, was hijacked in the Somali Basin approximately 900 nautical miles north of the Seychelles and 600 miles from the coast of Somalia.   EU NAVFOR in monitoring the situation can confirm that the M/V Asian Glory has now arrived off the coast of Somalia and is north east of Hobyo.