The Vancouver Fraser Port Authority has released the 2018 year-end statistics for cargo through the Port of Vancouver. The second consecutive year of record cargo volumes reflects Canada’s growing trade, said a press release.Overall cargo volume through Canada’s largest port reached a record high of 147 million tonnes, up 3.5 per cent from 2017, it said."One of the port’s biggest strengths continues to be the ability to accommodate the most diversified range of cargo of any port in North America. 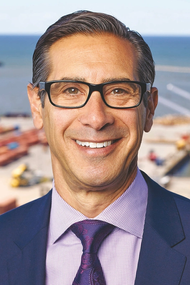 Green Marine Elects New Chairman of the Board

Seaspan was recognized as a recipient of the Blue Circle Award at an Awards Ceremony in Vancouver last night, presented by the Vancouver Fraser Port Authority (VFPA). The Blue Circle Award recognizes marine carriers that excel in environmental stewardship and attain the highest participation rates in the Vancouver Port Authority’s EcoAction Program.“We’re very proud to be recognized by the VFPA for our efforts. As a leader in the marine industry, we firmly stand behind our commitment to care for the environment…

Federal Funding for Port of Vancouver

The Vancouver Fraser Port Authority received federal funding for projects that will improve the flow of goods to and from the Port of Vancouver. Through the collaborative efforts of the port authority, Transport Canada, B.C.’s Ministry of Transportation and Infrastructure, TransLink and the Greater Vancouver Gateway Council, an infrastructure program called the Greater Vancouver Gateway 2030 strategy was created to ensure the roads and railways that lead to the Port of Vancouver are ready to manage Canada’s growing trade.

Though overall cargo volume through the Port of Vancouver in 2016 decreased 1.8 percent to 136 million metric tons from 2015, sectors experiencing declines were offset by others that hit new records, including the bulk grain sector, according to the Vancouver Fraser Port Authority released its 2016 year-end statistics. “One of our biggest strengths has been, and continues to be, the port’s ability to accommodate the most diversified range of cargo of any port in North America,” said Robin Silvester, president and chief executive officer of the Vancouver Fraser Port Authority.

The Vancouver Fraser Port Authority is aware that a public rally has been organized for this weekend by MP Jenny Kwan and community members in opposition to the proposed Centerm Expansion Project. The port authority respects the right of any group to voice concerns and opinions in a public way. A permit application for the project has not yet been submitted to the port authority. A round of public pre-consultation, intended to get early community input to the project design and conducted by an independent consultant… 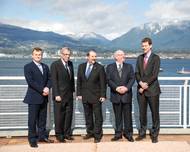 Canada acts to upgrade its safety system for shipping oil & liquefied natural gas safely through Canada’s waterways before any major new energy export facilities become operational. Tanker inspections: The number of inspections will increase to ensure that all foreign tankers are inspected on their first visit to Canada, and annually thereafter, to ensure they comply with rules and regulations, especially with respect to double hulls. Systematic surveillance and monitoring of ships: The government will expand the National Aerial Surveillance Program (NASP).