The stranding of a container ship in the Suez Canal has created disruptions in the global shipping industry that could take weeks and possibly months to clear, top container shipping lines said.Around 30% of the world’s shipping container volume - including goods like sofas, consumer electronics, apparel and shoes - moves through the 193 km (120 miles) Suez Canal daily. Empty containers, which Asian factories need to ship goods, are also caught up in the backlog.“Even when the canal gets reopened…

Northern Ireland temporarily suspended some post-Brexit checks at two ports on Monday after a local council withdrew staff over concerns for their safety and police said they planned to increase patrols at points of entry.Many pro-British unionists fiercely oppose the new trade barriers introduced between Northern Ireland and the rest of the United Kingdom as part of the Northern Ireland protocol, a standalone deal for the region after Britain left the EU.The council whose staff…

Britain clinched a narrow Brexit trade deal with the European Union on Thursday, just seven days before it exits one of the world’s biggest trading blocs in its most significant global shift since the loss of empire.The deal, agreed more than four years after Britain voted narrowly to leave the bloc, means it has averted a chaotic finale to the tortuous divorce that has shaken the 70-year project to forge European unity from the ruins of World War Two.It will preserve Britain’s zero-tariff and zero-quota access to the bloc’s single market of 450 million consumers…

A team of experts aims to examine how increasing Gulf investments in port infrastructures in the Horn of Africa has shaped its political landscape.Backed by funding from the Carnegie Corporation New York, the $500,000 research project will explore the relationship between the Middle East and East Africa – focusing on port infrastructures and transport corridors.Carnegie Corporation is the philanthropic foundation established by Andrew Carnegie in 1911 ‘to promote the advancement and diffusion of knowledge and understanding’. 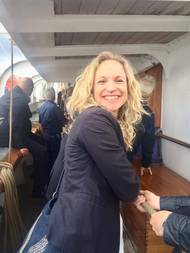 The Women’s International Shipping and Trading Association announced a new initiative aimed at helping seafarers.WISTA Norway, WISTA UK, WISTA Singapore, WISTA Brazil, and WISTA Argentina have come together to offer free WISTA membership for seafarers through August 31, 2020. Membership allows seafarers to access the largest network of female managers in the shipping industry, as well as online seminars, webinars and workshops. The idea for the project came from WISTA Norway.Pia Meling…

French electricity giant Électricité de France (EDF) is moving into the Irish energy market.EDF Renewables, a subsidiary of the French energy utility, has acquired a 50% stake in the Codling offshore wind project from Hazel Shore, a company linked to the property developer, Johnny Ronan.EDF Renewables will develop and build the project alongside Fred Olsen Renewables, which owns the other 50% stake in 1100MW Codling Wind ParkIt is the first investment by the international energy player in the Republic.The Codling project is located south of Dublin…

The offshore wind giant Ørsted has introduced a new operating model for the Offshore business, to support the execution of its project pipeline and future growth."The global market opportunities in renewables continue to expand and present significant opportunities for growth. In 2019, Ørsted expanded into Taiwan and the US with the award of significant projects," the largest energy company in Denmark said.The new operating model creates a more scalable organisation for Ørsted’s…

Condor Ferries, an operator of passenger and freight ferry services between UK and France, has been sold to a consortium including the French shipping company Brittany Ferries.Brittany Ferries, in consortium with the Columbia Threadneedle European Sustainable Infrastructure Fund (ESIF), has reached an agreement to acquire 100 percent of Condor Ferries from Macquarie Infrastructure and Real Assets (MIRA).Contracts have been signed and the deal is expected to be executed following scrutiny by relevant regulatory authorities.

During the cruise season that ended on 22 October, a total of 603,500 cruise passengers arrived in Helsinki. This was 16 per cent more than the previous year.There were a total of 303 ship visits to Helsinki. This was the first time the number exceeded 300. This translates to a 6-percent growth from last year (2018:285).The largest percentages of cruise passengers came from Germany (32%), the United States (21%) and the United Kingdom (10%). The top three nationalities remained the same as the previous year, although the proportion of German visitors grew slightly.

The Port of Rotterdam Authority has again put its preparatory measures for a No-Deal Brexit on hold following recommendations from the Ministry of Foreign Affairs.The largest port in Europe, located in the city of Rotterdam, Netherlands, said in a press note attributed the reason to the agreement reached yesterday by member states of the European Union and the United Kingdom on a Brexit extension until 31 January 2020."In concrete terms, this means that, effective from today, the buffer parking locations for trucks will again be dismantled.

UK Focuses on Safety of Navigation

International Maritime Organization (IMO)'s rules and regulations for suppressing unlawful acts against the safety of navigation can be seen in the wider context of the global fight against terrorism.The United Nations Counter-Terrorism Committee Executive Directorate (UNCTED) carries out assessment visits to countries to assess their compliance with various international security instruments and UN Security Council resolutions.IMO took part in a follow-up visit to the United Kingdom (7-11 October) together with experts from Interpol…

It is now only weeks left until the UK leaves the EU. According to the current timetable, this will take place on 31 October. The question of Brexit is raised in the Port of Gothenburg.Although the road leading to this point has been long and at times rocky, the date of the UK's withdrawal from the EU is approaching relentlessly. A 'soft' or 'hard' Brexit does not matter – the UK will be classed as a ‘third country’ in relation to EU countries such as Sweden, as it will be outside the single market.

North Sea Port and Lineas are joining forces to increase efficiency with 12 new rail connections to the European hinterland.According to a press note from the cross-border port that consolidates the port areas of Vlissingen, Terneuzen and Ghent, this is a significant expansion of the volume of rail transport from the port.A new rail connection between Interface Terminal Ghent and the Lineas Main Hub in Antwerp allows goods to be shipped via the international rail network of Lineas.The 12 new destinations are Madrid…