Rail Shipments of Canadian Oil to US Seen Rising over 60%

Canadian crude shipments to the United States by rail could rise more than 60 percent this year on demand by Gulf Coast refiners for the heavy crudes and the wide differential between Canadian grades and the U.S. benchmark. The rail shipments could reach as much as 350,000 barrels per day (bpd) by year end and average some 400,000 bpd in 2019, estimated analysts at Tudor, Pickering, Holt & Co. Last year, the shipments averaged 130,000 bpd, according to U.S. government data. Canadian crudes have been replacing heavy oil from Venezuela and Mexico at the Gulf Coast…

A raging Canadian wildfire grew explosively on Saturday as hot, dry winds pushed the blaze across the energy heartland of Alberta and threatened to burn close to an oil sands project. The fire that has already prompted the evacuation of all 88,000 people who lived in the city of Fort McMurray was set to double in size on Saturday, the seventh day of what is expected to be the costliest natural disaster in Canada's history. Provincial officials praised evacuees for their patience and…

The Canadian province of Alberta, the biggest source of U.S. oil imports, announced the members of its climate change policy review panel on Friday, part of its pledge to implement new rules on greenhouse gas reductions. Environment Minister Shannon Phillips said the panel would offer recommendations to the government by early November, ahead of a key United Nations climate change conference in Paris in December, but did not say when new GHG targets are likely to come into effect.

Alberta's energy regulator said on Saturday it is investigating reports that about 30 blue herons have died at a Syncrude Canada oil sands mine site in the northern part of the Canadian province. The Alberta Energy Regulator said it sent investigators to the Syncrude Canada Mildred Lake site, which is about 40 km (25 miles) north of Fort McMurray. In 2010, Syncrude was fined C$3 million ($2.29 million) for negligence in the 2008 deaths of 1,600 ducks in a toxic waste pond, a case that fueled international concern about the environmental impact of developing Canada's oil sands.

Samsung Heavy Industries (SHI) has announced that it is to build three shuttle tankers for Teekay Offshore Partners, at a total price of $365m and the contract includes an option for an extra vessel. The contract was signed in Oslo where Nor-Shipping 2015 was held. As for the contract value, while SHI says that the three tankers cost USD 330 million, for Teekay it is USD 365 million. The tankers ordered are 155,000DWT shuttle tankers that are 293m long and 49m wide, and they will be delivered by February 2018.

Cory Troke joined the exodus west two years ago, leaving scenic but job-scarce Cape Breton, Nova Scotia, after being laid off as a machinist. Troke, 37, headed to the Alberta oil sands, apprenticing as a pipefitter and finding 19 months of steady work, flying in for two weeks, returning home for one. By October Troke was out of work again, and he was not alone. A downturn driven by tumbling crude prices is causing turmoil in an island economy that has grown dependent on workers commuting more than 3,000 kilometers (1,860 miles) west.

A European Union plan to label Canadian tar sands oil as highly polluting as part of its fight against climate change has been abandoned after years of opposition from Canada, clearing the way for exports of tar sands crude to the European market. A proposal published by the European Commission on Tuesday removes what could have been an EU obstacle to shipments of the crude and comes at a time when tensions between the EU and its top oil supplier, Russia, are running high. EU sources…

Suncor Energy Inc , Canada's largest integrated oil and gas producer, said on Monday it has appointed Alister Cowan as its chief financial officer, ending a seven-month search. Cowan has had the same role at Husky Energy Inc, the country's No. 3 integrated oil producer, since 2008. He takes over as CFO at Suncor on July 21. "With almost 30 years' experience leading the finance function for a number of companies in the energy and utilities sectors, Alister has the breadth and depth of experience required to build on Suncor's strong financial position…

Originally conceived as a training vessel, the Robert Allan designed BRAtt has developed into a class of small but tough workboats. Adrenalin Marine Ltd. of Delta, B.C. was chosen as the licensed builder for all BRAtts in North America and to date has built three of these innovative new vessels. The BRAtt is not only a very cost-effective tug for training, but an ultra-compact workboat which can operate in small ports and perform specialized functions such as ship-handling, line-handling, yarding, boom deployment, etc. 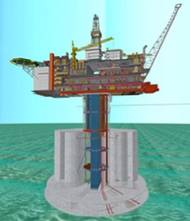 The Hebron field development offshore Newfoundland and Labrador was sanctioned by operator ExxonMobil and its co-venturers. Located approximately 350 km offshore Newfoundland, the Hebron platform will be a concrete Gravity Based Structure (GBS) in 95 meters water depth. The Hebron field is estimated to produce more than 700 million barrels of oil. The platform is being designed for an oil production rate of 150,000 barrels of oil per day. For Statoil, which holds a 9.7% share in Hebron, this is a significant component in the growth of the company’s Canada East Coast operations.

Statoil, Chevron Canada and Repsol E&P Canada have been named the successful bidders for exploration rights on two land parcels in the Flemish Pass Basin, offshore Newfoundland and Labrador, Canada. This was the result of a land sale issued by the Canada-Newfoundland and Labrador Offshore Petroleum Board (C-NLOPB). The land parcels are located west of Statoil’s Mizzen discovery in the Flemish Pass Basin. Statoil will be the operator of both licences with a 50 % interest. Chevron Canada has 40 % and Repsol E&P Canada has 10%.