The only orders to be placed since the beginning of the year are from OOCL and Great Horse China for a combination of 7 ULCV’s ranging in size. This is a drop of 86% compared to this time last year and can only be due to the Covid-19 outbreak.As the global lockdown intensified through March, rates and values across all sizes fell. We have seen the larger 8,500 TEU tonnage earnings fall by c.40% since the start of the year which has bought values down a considerable amount. Container traffic out of the East picked up from the end of March as the situation in Asia…

Total number of Tanker orders are down by 26% for 2020 YTD compared to the same period in 2019. By comparing to 2018 YTD, this year there have been half the number of orders placed. This comes as no surprise as Europe and the US entered the lockdown phase of the pandemic earlier this year, only a month or so after the Chinese industry shut down. However, towards the end of May 2020 orders were placed for both VLCC’s and Suezmaxes by the Greeks, Norwegians and Angolans accounting for USD c.780 mil.The S&P market has also taken a hit so far this year with sales down 25% compared to 2019 YTD.

Royal Caribbean International (RCI) has celebrated the start of construction of its fifth Oasis class ship at the Chantiers de l’Atlantique shipyard in Saint-Nazaire, France."The first steel plate of a new Oasis-Class ship (hull 34)  has been cut today at Chantiers de l’Atlantique machining workshop. This ceremony marks symbolically the start of the construction of the third Oasis-class built by the shipyard, after Harmony of the Seas and Symphony of the Seas respectively delivered in 2016 and 2018… 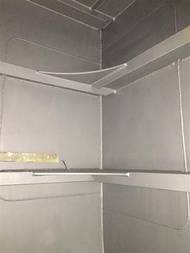 Harris Pye to the Rescue for Damaged Hull Repair

Timing is all-important when repairs to a busy drillship are the order of the day. When Pacific International Drilling West Africa’s (PIDWAL) drillship Pacific Bora suffered damage to the starboard aft hull off the coast of Nigeria, PIDWAL called for assistance from the Harris Pye Engineering Group. The repair was successfully evaluated; all necessary specialists and labor, steel, tools and equipment were mobilized; and the repair was made, installed, painted and tested in less than two weeks of the Harris Pye team boarding the Pacific Bora (“PBA”).

Shipbuilder VT Halter Marine, Inc. has officially started the construction of Taíno, the second of two liquefied natural gas (LNG)-powered, combination container – Roll-On/Roll-Off (ConRo) ships for the Crowley Maritime Corp.’s liner services group. VT Halter Marine and Crowley entered into a contract for the pair of ships in November 2013 and construction began on the second ship with the first steel plate cutting in Pascagoula, Miss., this morning. A similar ceremony took place for the first ConRo, El Coquí, when its construction began in October 2014.

General Dynamics NASSCO has held a keel-laying ceremony for the first ECO tanker currently under construction for SEA-Vista, at the company’s shipyard in San Diego. The ECO tanker is the first of a three-tanker contract between General Dynamics NASSCO and SEA-Vista, which calls for the design and construction of three 50,000 deadweight ton LNG-conversion-ready product carriers with a 330,000 barrel cargo capacity. The 610-foot-long tankers are a new “ECO” design, offering improved fuel efficiency and the latest environmental protection features…

The Government of Canada joined Irving Shipbuilding and its employees today marked the signing of the $2.3 billion Arctic Offshore Patrol Ships (AOPS) build contract at Halifax Shipyard. The Honorable Diane Finley, Minister of Public Works and Government Services Canada and the Honorable Peter MacKay, Attorney General and Minister of Justice of Canada and Minister Responsible for Nova Scotia participated with Irving Shipbuilding as well as provincial, municipal and community leaders…

The keel for the first of two liquefied natural gas (LNG)-powered, combination container – Roll-On/Roll-Off (ConRo) ships for Crowley Maritime Corp.’s liner services group was laid during a ceremony at ship-builder VT Halter Marine, Inc.’s facility in Pascagoula, Miss. The keel laying ceremony marked the next step in the construction of Crowley’s first Commitment Class ship, which will exclusively serve the U.S.-Puerto Rico trade lane, replacing the company’s towed triple-deck barge fleet in the South Atlantic trade which served the trade since the early 1970s.

Since weld distortion is a very costly problem for U.S. shipyards, the National Shipbuidling Research Program (NSRP) has embarked on a project to reduce weld distortion through innovative Induction Heat process. A new welding process -- HiDep Arc Welding -- has been invented, which uses induction heating  to heat the weld joint ahead of the arc Welding torch. By adjusting the induction heating it is possible to modify the thermal profile of the weld to prevent the asymmetrical cooling which causes most weld distortion.

Future 'USS Michael Monsoor' (DDG 1001) keel authenticated at the General Dynamics-Bath Iron Works shipyard. The keel authenticators were George and Sally Monsoor, parents of the ship's namesake Medal of Honor recipient Petty Officer Second Class Michael A. Monsoor. They confirmed that the keel is "truly and fairly" laid by having their initials welded into a steel plate that will be affixed to the ship's hull. "Together with Bath Iron Works, we're very honored to have the Monsoor family with us here today to commemorate the first milestone in bringing this ship to life," said Capt.

General Dynamics Bath Iron Works celebrate the keel laying of 'Michael Monsoor' (DDG 1001), the second ship in the planned 3- ship Zumwalt-class of guided-missile destroyers. The keel unit is the 4,400-ton, heavily outfitted mid-forebody section of the ship, which was moved from the shipyard's Ultra Hall construction facility earlier in the month onto the building ways. Brent West, DDG 1000 program manager for Bath Iron Works, hosted the ceremony and welcomed the audience of several hundred Bath Iron Works employees…

Gary Norville started at Messer Cuttings Systems Inc. in September 1980 selling and installing cutting machines. Norville worked in many different departments during his career with Messer, gaining vast knowledge of the company while working his way up the corporate ladder, eventually earning the position of President and CEO in 2007. Messer announced today that Norville’s last day will be August 29, 2014. “If you work over the years in several different positions in a company, you cannot help but ask yourself…how do I see the future development of this organization?

On November 17, 2011, General Dynamics Bath Iron Works celebrated the keel laying of Zumwalt (DDG 1000), the first ship in the planned three-ship Zumwalt class of guided-missile destroyers. The keel unit is the 4,000-ton, heavily outfitted mid-forebody section of the ship, which was moved from the shipyard’s Ultra Hall construction facility onto the building ways in late October. The ship is named for ADM Elmo Zumwalt (1920-2000), regarded as the father of the modern Navy. He… 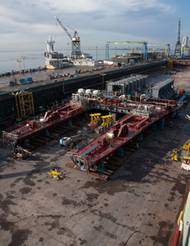 General Dynamics NASSCO hosted a keel laying ceremony for the first Mobile Landing Platform (MLP) ship at the company’s shipyard in San Diego. Mrs. Pat Mills was the honoree for the ceremony. She is the wife of U.S. Marine Corps Lieutenant General Richard P. Mills, Deputy Commandant for Combat Development and Integration. Mrs. Mills validated the keel laying by welding her initials into the ship’s structure. The steel plate with her initials will be permanently affixed to the ship’s keel, remaining with the vessel throughout its time in service.

Nippon Kaiji Kyokai (ClassNK) announced the publication of a new guideline entitled, Guidelines on Shipboard Wireless LAN Systems. The use of wireless LAN systems is becoming more accessible in public areas onshore such as airports, train stations, and hotels. However, with the exception of some passenger ships, LAN systems onboard ships have predominantly been limited to wired systems. Even though it is difficult to predict the transmission characteristics of radio waves within the hull structure of a ship completely surrounded by steel plate…

General Dynamics NASSCO hold keel laying ceremony in its San Diego faciltiy for the future 'USNS John Glenn' (MLP 2). Delivery of this second MLP ship is scheduled for first quarter 2014, and is to be named John Glenn, in honor of John Herschel Glenn, Jr., the former U.S. Marine Corps pilot, astronaut and U.S. senator who was the first American to orbit the Earth and the third American in space. Ms. Lyn Glenn, daughter of John Herschel Glenn, Jr., and Mrs. Helen L. Toolan, wife of Lieutenant General John A.

The 49.2 ft long ship prototype Stena Airmax was named in Gothenburg. The prototype is part of a project in which an air cushion is being tested to investigate to what extent it reduces the friction between the hull and the water, thus also reducing fuel consumption and emissions of large tankers in the future. Stena will invest in the region of $6.8m in the project. Following the very good results achieved in tests with small ship models, Stena Teknik has developed this large-scale model weighing 25 tons. The same tests will now be carried out with the Stena Airmax.

Construction starts on the second of two Aframax tankers for SeaRiver Maritime, Inc., Exxon Mobil Corporation’s U.S. marine affiliate. The construction of the two tankers, valued at $400 million, will create more than 1,000 jobs. A small ceremony was held in the shipyard’s Fabrication Shop to commence cutting on the ship’s first steel plate. These plates will become part of the double hull of the tanker that protects the cargo tanks. When completed in 2014, the vessels will be 820 feet long and be capable of carrying 115,000 tons of crude oil.

SeaRobotics has delivered the first HullBUG (Hull Bio-inspired Underwater Grooming) System to the Center for Corrosion and Biofouling Control at Florida Institute of Technology in Melbourne. This will be tested and further developed at the newly commissioned Large Scale Seawater Facility , which is located at Port Canaveral and funded by the U.S. Navy Office of Naval Research (ONR). The HullBUG system is an autonomous underwater vehicle designed to crawl on ship hulls or other underwater structures and "groom" their surface.