Star Bulk Carriers Corp. a global shipping company focusing on the transportation of dry bulk cargoes, announced that  it has entered into a Capesize vessel pooling agreement (“CCL”) with BOCIMAR INTERNATIONAL NV, GOLDEN OCEAN GROUP LIMITED and C TRANSPORT HOLDING LTD. Star Bulk has agreed to market nine  of the Company’s Capesize dry bulk vessels, which had previously been operating in the spot market, as part of the CCL fleet. Together with Star Bulk’s nine vessels, CCL initially consists   of 65 modern Capesize vessels and will be managed in Singapore and in Antwerp.

Star Bulk Carriers Corp. a global shipping company providing transportation solutions in the dry bulk sector, today announced the sale of M/V Star Mega, a 170,631 dwt Capesize vessel, built in 1994, to an unaffiliated third party. The Company delivered the Vessel to the Buyers on June 18, 2015. On a fully delivered basis, Star Bulk will have a fleet of 95 vessels, with an aggregate capacity of 11.0 million dwt, consisting of Newcastlemax, Capesize, Post Panamax, Kamsarmax, Panamax, Ultramax, Supramax and Handymax vessels with carrying capacities between 45,588 dwt and 209,529 dwt.

Star Bulk Carriers Corp. announced today that it plans to make an underwritten public offering of its common stock. The Company intends to use the net proceeds from the offering for its new building program and general corporate purposes. Jefferies LLC and Morgan Stanley & Co. LLC will act as joint book-running managers for the offering. The Company intends to grant the underwriters a 30-day option to purchase additional shares of its common stock. The offering is subject to market conditions…

Star Bulk Collects $8.016m From Sale of Its Claim Against Pan Ocean

Star Bulk Carriers Corp. (NASDAQ: SBLK) announced that following the settlement and adjudication of the company's subsidiary Star Borealis LLC claim for damages and due hire related to the repudiation of the long-term time charter of the M/V Star Borealis by charterer Pan Ocean  Co Ltd., previously filed with the Seoul Central District Court, Korea, Star Bolrealis negotiated, sold and assigned the rights to the Adjudicated Claim to an unrelated third party against a consideration of eight million sixteen thousand dollars collected in full.

Star Bulk entered into a definitive agreement with Excel Maritime Carriers Ltd., and as a result, will acquire 34 drybulk vessels for an aggregate of 29.917 million shares of common stock of Star Bulk and $288.39 million in cash. Star Bulk Carriers Corp. announced today that it has entered into definitive agreements with Excel Maritime Carriers Ltd. pursuant to which the company will acquire 34 secondhand operating drybulk carriers, consisting of six Capesize vessels, 14 sistership Kamsarmax vessels… 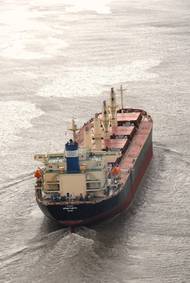 Star Bulk Carriers Corp. (Nasdaq: SBLK) took delivery of M/V Star Challenger (formerly M/V “Supra Challenger”), a 61,462-dwt Ultramax bulk carrier of built in Japan by Imabari Shipbuilding Group in November of 2012. The ship has been employed on a short-term time charter for a period of 40 days at a gross hire rate of $13,700 per day. Star Challenger is the first of the two modern Ultramax bulk carriers to be delivered to the Company, pursuant to the relevant definitive agreement announced on November 18, 2013. by the end of December 2013.

Greece's Star Bulk Carriers Corp. announce its unaudited financial & operating results for the 3 & the 12 months ended December 31, 2012. Star Bulk is a global shipping company providing worldwide seaborne transportation solutions in the dry bulk sector. Its vessels transport major bulks, which include iron ore, coal and grain and minor bulks including bauxite, fertilizers and steel products. The company reported a net loss of about US$315-million in 2012. On January 2…

Greece's Star Bulk Carriers Corp. Star Bulk Carriers Corp. announce that their Star Polaris sustained main engine failure while sailing from the port of Dangjin, South Korea. The ship is currently docked in South Korea where it is undergoing repairs, which are expected to be completed in approximately four months. As a result, Star Polaris has been declared off hire by its charterers. Subject to the completion of an investigation into the cause of the engine failure, the Company…

Star Bulk Carriers Corp. (Nasdaq: SBLK) announced that one of its vessels, the STAR POLARIS, sustained bottom damage when entering the port of Eregli, Turkey. Following a survey of the damages, the vessel proceeded for permanent repairs to Daewoo Mangalia shipyard in Romania. The repairs are expected to be completed in approximately thirty days. As a result of the incident, the vessel has been declared off hire by its charterers. The Company has commenced an investigation into the circumstances of the incident and has reserved its rights relating to the unsafeness of the port.

Star Bulk Carriers Corp. (Nasdaq: SBLK) has entered into an agreement to sell the Star Ypsilon, a 150,940 dwt Capesize vessel, built 1991, to a third party for a contracted sale price of $9.12 million. The Company plans to deliver the vessel to the buyers within March 2012. Also, Star Bulk announced that its subsidiary Star Beta LLC and Deiulemar Shipping S.p.A ("Deiulemar") agreed to settle all claims that were the subject of an ongoing arbitration. In connection with the settlement…