Norway-based digital technology innovator FutureOn announced a multi-license contract for its Field Activity Planner (FieldAP) software with Subsea 7, a leading global contractor providing engineering, construction and services to the offshore energy industry.“FieldAP brings all the data about the field into one centralized digital environment to help our customers see more about their assets from every vantage point and collaborate meaningfully, which makes it possible for them to make economically prudent planning decisions…

Delgado’s Simulator Suite is comprised of three interactive Full Mission Bridge simulators. Simulators are used for Wheelhouse Proficiency Management classes to provide scenarios on navigating waterways on different types of vessels. Simulators can be programmed to run three vessels at the same time, so that students in all three wheel houses can communicate and interact with each other. Both conventional and Z-Drive controls can be used in the training. In the past 12 months…

Goodwood Ship Management, the Singapore based management company, has expanded its seafarer training facilities in Mumbai.   A new training center and office has been equipped with the latest training simulation software and tools for Goodwood to further nurture its pool of seafarer talent.   “We are delighted that a MAN B&W ME Electronic Engine Simulator has been successfully installed in our new training center in Mumbai. This is the latest version of such simulator commissioned in India”, said Capt Ashok Sabnis, Goodwood Managing Director. 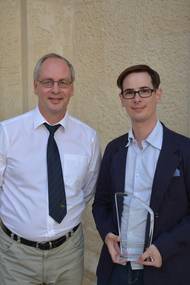 Henrique M. Gaspar has been announced as the winner of the DNV GL COMPIT Award 2016. The Brazilian CAD (computational aided design) expert, working at NTNU Ålesund, was honored for his work on merging innovative digital technologies in ship design and operation at the COMPIT Conference, which took place May 9-11 in Lecce, Italy. The video game industry has spurred the development of cost-effective software and hardware solutions for Virtual Reality and Augmented Reality. Fast graphics processors at affordable prices and a culture of collective development…

Maritime training solutions provider Buffalo Computer Graphics Inc. (BCG) has donated its Enhanced Graphical User Interface (GUI2) simulation software to the U.S. Naval Academy Foundation in Annapolis, Md. for distribution to the academy’s seamanship and navigation department. BCG’s donation included four software licenses to support past donations from Northrup Grumman Corporation of the Navy’s Electronic Chart Display and Information System (ECDIS) to train midshipmen on the charting system they will encounter once they graduate and move out to the fleet.

Advanced 3D design and simulation software was used to recreate the technological and engineering innovations of WWII as a part of the seventieth anniversary of D-Day and the Invasion of Normandy, apprise project leaders, France’s Dassault Systèmes. Virtually reconstructing the Mulberry Harbor, the LCVP landing craft and the Waco glider brings to life one of the most exciting episodes of 20th-century history for the broadest possible audience. The Landing Craft, Vehicle & Personnel…

As San Jacinto College prepares to break ground to build the region's newest maritime training facility, some of the industry's most sought after training technology has arrived and is awaiting its new home. The college recently received three interactive, full-mission, ship bridge simulators, thanks to a collaborative agreement with the Houston Pilots. They will be moved to the College's 45,000-square-foot Maritime Technology and Training Center once it opens, projected for mid 2015.

In partnership with the Port of Dover Consultancy, BMT Isis (BMT), a subsidiary of BMT Group, has announced the launch of a two day, interactive training course and workshop for Harbor Masters, Port Managers and Port Authorities. Entitled ‘Managing Port Safety and Security’, the course will provide delegates with a better understanding of what’s required to help meet the guidance contained within the Port Marine Safety Code. With contributions from the Marine Accident Investigation Branch (MAIB) and Port Skills and Safety (PSS)…

Rhode Island’s economic assets include a surprising number of prominent and lesser known maritime firms. A recent media tour hosted by the Rhode Island Economic Development Corporation (RIEDC) highlighted the Ocean State’s key role(s) in the nation’s maritime industry. As the state of Rhode Island – along with everyone else, so it seems – works to revitalize a struggling local economy, it has become increasingly apparent that the marine industry will play a prominent role in that revival.

Virtual Training and Simulator developer VSTEP will be demonstrating its new NAUTIS Port Security Awareness simulation software during the Small Vessel Threats Security Conference from 28-29 September in San Francisco. VSTEP is one of the main conference sponsors and will be present at its conference boot to demonstrate its innovative Security Awareness solutions. During the Conference, VSTEP will present its training products directly related to countering the potential threats from small vessels.

Alion Science and Technology, an employee-owned technology solutions company, has won a $15m contract to support the Naval Operational Logistics Support Center (NOLSC) as the center integrates and modernizes its logistics support systems that support deployable units in the Navy and Coast Guard. Under the three-year logistics management services contract, Alion will assist NOLSC with logistics planning, modeling and simulation, concept generation and development, and manning, personnel and training analysis.

In 2006, Aries Propulsion Research Labs (APR Labs) introduced a new method of propulsion technology labeled Omni-Directional Propulsion (ODP). The method was created by designer Chris B. Hewatt and was first published on the United States Patent and Trade Organization (USPTO) Web site as publication 20060230847. APR Labs says that this unique design has been gaining attention in the transportation industry, but could have its greatest impact on the marine industry because it creates movement without propellers.