The Coast Guard safely towed a disabled 46-foot commercial fishing vessel with three persons aboard back to the Port of Honolulu, Friday. A 45-foot Response Boat-Medium crew from Coast Guard Station Honolulu relieved the USCGC Kittiwake (WPB 87316) in towing the vessel at the entrance of the Port of Honolulu and brought them safely to the pier. Watchstanders at the Coast Guard Sector Honolulu command center received a report Wednesday from the crew of fishing vessel Lily Kaileia that they were disabled and adrift approximately 115 miles south of Honolulu Harbor.

United States District Court Judge Leslie E. Kobayashi today accepted the guilty plea of Doorae Shipping Co., LTD, a South Korean maritime operations company, and sentenced the company to pay a fine of $275,000, and a term of three years of probation for the failure to maintain an accurate oil record book, in violation of the Act to Prevent Pollution from Ships. According to the Information to which Doorae pled guilty, the operation of a marine vessel, such as the B. Pacific, a petroleum oil tank ship registered under the flag administration of the Marshall Islands…

The Coast Guard, Ocean Safety and Lifeguard Services and Honolulu Fire Department personnel rescued 10 boaters in two separate cases off Kahala, Oahu, Sunday. In both cases responders were able to locate all survivors, bring them aboard response craft and get them to safety. At 10:04 a.m. the Coast Guard overheard Ocean Safety personnel responding to a report of a 15-foot vessel taking on water with three people aboard a mile and a half south of Kahala. Ocean Safety located all three boaters, took them aboard their jet skis and brought them to shore.

United States District Court Judge Leslie E. Kobayashi accepted the guilty plea of Doorae Shipping Co., LTD, a South Korean maritime operations company, and sentenced the company to pay a fine of $750,000, a community service payment of $200,000, and a term of two years of probation for the failure to maintain an accurate oil record book, in violation of the Act to Prevent Pollution from Ships, and making false statements to the U.S. Coast Guard concerning the discharge of oil contaminated bilge water.

Search on for Kayak Owner near Makapu'u Beach, Oahu

The Coast Guard is searching for the owner of an unmanned kayak found on the rocks near Makapu'u Beach, Oahu, Saturday. Anyone with information that may help identify the owner of the kayak is asked to contact the Coast Guard Sector Honolulu Command Center at 808-842-2600808-842-2600 FREE FREE. An MH-65 Dolphin helicopter crew from Coast Guard Air Station Barbers Point is currently searching the area. Sector Honolulu also issued an urgent marine information broadcast alerting mariners in the area to the situation.

Japanese Student Overboard in the Pacific

U.S. Coast Guard (USCG) search operations continue for a student reported overboard from a Japanese training vessel approximately 70 miles southwest of Kauai, Tuesday. USCG said its watchstanders at the Coast Guard Sector Honolulu Command Center were notified at 9:56 a.m., regarding a 17-year-old male Japanese national who was reported overboard from the 208-foot Japanese training vessel Hokuho Maru during transit from Honolulu to Japan. The man was last seen at approximately 2:50 a.m., and was reported missing after he did not show up for muster.

The Coast Guard is supporting the Hawaii County Fire Department in the search for a missing passenger from a grounded sailboat near Kaupuleu, Hawai'i, Sunday. Watchstanders at Coast Guard Sector Honolulu received notification at 6:36 a.m., of a flare sighting Saturday, from the Hawaii County Fire Department. The flares were later confirmed as having been fired by the crew of the 74-foot sailing vessel, Hawaii Aloha, who abandoned ship into a life raft. Four of the five boaters aboard the Hawaii Aloha were found in the life raft and rescued by the fire department.

A man is safe after being rescued from a disabled boat approximately 46 miles southwest of Kahoolawe, Maui, Saturday. At 10:15 a.m., watchstanders at the Coast Guard Sector Honolulu command center received notification from a friend of the vessel’s operator reporting that the 19-foot boat was disabled. The mariner contacted his friend using a cell phone. An approximate position was determined using information form the cell phone call. An HC-130 Hercules airplane crew and the 378-foot Coast Guard Cutter Rush were diverted to search.

The Coast Guard and Ocean Safety rescued two kayakers trapped on Molokini Crater Monday. Watchstanders at Sector Honolulu Command Center received notification at 3:20 p.m. from Maui Fire Department of two kayakers who were beset by weather and were forced onto the rocks on Molokini Crater. After climbing to safety, the kayakers called 911 for assistance. A 45-foot Response Boat-Medium crew from Station Maui and a jet ski from Ocean Safety responded. At 3:46 p.m., the jet ski arrived on scene and ferried the kayakers from the rock to the awaiting RB-M.

The fishing vessel Pacifica moored safely in Honolulu Harbor Monday after taking on water approximately 144 miles north northeast of Oahu. The cause of the flooding was determined to be insufficient shaft packing in the stern tube, which allowed water to enter the vessel. The Coast Guard Cutter Kittiwake, an 87-foot patrol boat homeported here, escorted the vessel back to the Port of Honolulu. Watchstanders at the Coast Guard Sector Honolulu Command Center received a distress call from the commercial fishing vessel Pacifica at 8:58 a.m., Sunday.

The Coast Guard is assisting the crew of a sinking fishing boat 144 miles north northeast of Oahu, Sunday. Watchstanders at the Coast Guard Sector Honolulu Command Center received a distress call from the commercial fishing vessel Pacifica at 8:58 a.m., Sunday. The crew reported the vessel was taking on water at ten gallons per minute and was continuing to make way toward Oahu at 7 miles per hour. An HC-130 Hercules airplane crew launched from Air Station Barbers Point at 9:29 a.m. The Hercules crew arrived on scene at 10:05 a.m. and dropped dewatering equipment to the fishing vessel.

The Coast Guard Captain of the Port reopened Port Allen in Kauai Monday morning after surveying crews deemed it  safe for transit. The maritime public is advised to be vigilant when entering ports and harbors and to cooperate with the direction of the Coast Guard and local harbor masters. Mariners seeking additional information on port and harbor openings should contact Sector Honolulu at (808) 842-2600 or monitor VHF Channel 16 or the Hawaii Department of Transportation Harbors Division at http://hidot.hawaii.gov/harbors/. 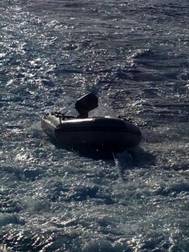 The U.S. Coast Guard (USCG) said it is seeking the public’s assistance after receiving a report of an unmanned adrift, black and grey inflatable dinghy offshore approximately two and a half miles west of Kaanapali, Maui, Monday. The passenger ferry Molokai Princess reported the dinghy adrift at approximately 7:45 a.m., and took it in tow back to Kaunakakai Harbor, Molokai. The dinghy is approximately 10 feet long with a 6-horsepower outboard engine. There are no markings on the vessel…