Most of Earth’s volcanoes are in the oceans, yet scientists know very little about them compared to volcanoes on land. Schmidt Ocean Institute’s research vessel Falkor recently completed a 41-day expedition near Tonga, using cutting-edge technology to map, view, and sample underwater volcanoes while sharing observations with the public using real-time video streaming and chat programs. Findings include detecting widespread evidence of deep sea explosive volcanism, observing one of the rarest volcanic rock types on Earth…

Dr. Mak Saito from Woods Hole Oceanographic Institution, along with his research team have just returned from a 22 day expedition, called “ProteOMZ”, aboard Schmidt Ocean Institute’s research vessel Falkor. During this voyage the team implemented the first large-scale deployment of a new protein biomarker technology. The “targeted metaproteomics” approach will be used to diagnose marine microbial populations and their interaction with ocean chemistry. Using underwater pumps, the upper 1 kilometer of the ocean’s microbial microbiome was sampled by filtering 85…

Schmidt Ocean Institute’s research vessel Falkor returns from the first ever expedition to systematically characterize the rarely explored Mariana Back-Arc. HAGANTA, GUAM – A diverse team of scientists are returning from a 28-day expedition onboard R/V Falkor that has more than doubled the number of known hydrothermal vent sites in the Mariana Back-arc region. This area, west of the Mariana Trench, is where plate spreading and submarine volcanism are concentrated. Several momentous findings were made, including the discovery of one of the deepest vents ever found.

Schmidt Ocean Institute Selects Adonis AS Personnel Manager to Automate HR and Payroll Processes for Flagship Research Vessel. Adonis AS has announced that Schmidt Ocean Institute (SOI) has selected Adonis Personnel Manager (APM) to automate crew rotation and payroll for the R/V Falkor, a technologically advanced scientific platform that supports multidisciplinary oceanographic research and technology development. Adonis’ solution will integrate a shore-side hosted version of APM with the server aboard the R/V Falkor…

The Coast Guard has identified a sunken fishing vessel missing since 1972. a remote operating vehicle (ROV) to investigate. The fishing vessel Katmai was discovered in 8,920 feet of water approximately 200 miles offshore. After receiving data of the discovery from BOEM, the U.S. Coast Guard Investigations National Center of Expertise initiated a cold case investigation, the result of which has now been published by the Coast Guard. Oskar Joos, his wife, eight-year-old child and deckhand Clinton Hollevoet departed Mobile for Anchorage, Alaska on the fishing vessel Katmai Feb. 18, 1972.

Schmidt Ocean Institute's 'R/V Falkor' to advance studies of artificial reefs, red tides & uncharted regions of the Gulf of Mexico. Scientists with the Harte Research Institute for Gulf of Mexico Studies (HRI) and the College of Science and Engineering at Texas A&M University-Corpus Christi will study the oceanography of the South Texas coast, including influences on the distribution of red tide while aboard the R/V Falkor later this month. The R/V Falkor is being provided by… 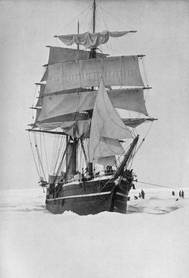 Schmidt Ocean Institute’s flagship 'R/V Falkor' locates the wreck of historic exploration ship off the coast of Greenland. During routine functional performance testing of the mutibeam mapping echosounders on the Schmidt Ocean Institute’s flagship R/V Falkor, the team aboard — including researchers from the University of New Hampshire, Ifremer, and Woods Hole Oceanographic Institution — discovered the S.S. Terra Nova, a whaler, sealer and polar exploration ship that sunk off the southern coast of Greenland in September, 1943, after being damaged by ice.