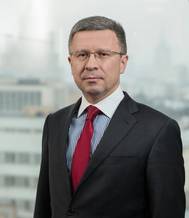 PAO Sovcomflot (SCF Group) informed that it has signed a new $252 million 7-year credit facility with a consortium of six leading international banks, which includes: ABN AMRO Bank; BNP Paribas; Citibank; ING Bank; KfW IPEX-Bank, and Société Générale. The funds will be used towards financing a series of six Aframax tankers, the first-ever such vessels purpose-designed to be powered by LNG, currently under construction and due for delivery from Q3 2018 to Q2 2019. These innovative…

Christophe de Margerie, the icebreaking LNG carrier built to order for SCF Group (Sovcomflot) to serve the Yamal LNG project, has won the award for Engineering Project of the Year at the 2017 S&P Global Platts Global Energy Awards. The winners were announced at an award ceremony held in New York on 7 December 2017. At the award ceremony, SCF Group was represented by Executive Board members Nikolay Kolesnikov, Executive Vice President and CFO of Sovcomflot, and Sergey Popravko…

JV for 3D seismic in Arctic

Paris-listed seismic giant CGG and Russia's largest shipowner, SCF Group (Sovcomflot), have formally registered a joint-venture company focused on coldwater  surveys, reports Interfax. The joint venture, to be called Arctic Geophysical Exploration (AGE), will be 51 per cent owned by Sovcomflot and 49 per cent owned by CGG. The company will be incorporated in Russia with its headquarters in Moscow. CGG and Sovcomflot will have a combined total of four vessels scheduled to operate…

Grounded Tanker Refloats Itself, Heads for Port of Pascagoula

The stranded tanker SCF Khibiny on June 20 refloated itself without third party assistance and stayed at the anchorage of the port of Istanbul, SCF Group said Tuesday. No crew members were hurt, and no damage was caused to the vessel or its cargo. On 22 June, after the vessel received clearance from port authorities and classification society, the SCF Khibiny continued her journey as normal. The SCF Khibiny will unload her cargo at the Port of Pascagoula, USA.

OAO Sovcomflot (SCF Group) signed a new USD 319 million 10 year credit facility with a consortium of leading European banks with ING acting as Agent. The funds will be used towards financing two new ice-class LNG carriers SCF Melampus and SCF Mitre, which will operate on long-term contracts with the Shell Group. The new high-spec Atlanticmax Ice2 (1C) class gas carriers feature a tri-fuel engine, a cargo capacity of 170,000m³ and are equipped for operating in harsh and low temperature conditions.

OAO Sovcomflot (SCF Group) today reported results for the nine months and third quarter (Q3) ended 30 September 2014. n.a. Commenting on the results, Sergey Frank, President and CEO of OAO Sovcomflot, said, “Sovcomflot has performed strongly in the first nine months of 2014, with revenue and profits significantly ahead of the comparable period last year. These financial results reflect an improved freight rate environment over the period, especially within the crude oil segment of the tanker market.

A steel-cutting ceremony was held on September 29 for the lead gas tanker ordered by SCF Group for transportation of liquefied natural gas (LNG) under the Yamal LNG project. The prototype vessel will be operated under a long-term time charter between OAO Sovcomflot and JSC Yamal LNG. The steel-cutting ceremony, marking the formal start of a ship’s construction process, took place at the Daewoo Shipbuilding and Marine Engineering Co., Ltd. (South Korea) shipyard in the presence of representatives from OAO Sovcomflot… 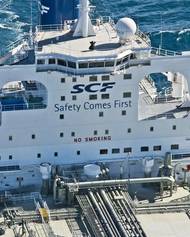 Mikhail Ulyanov, an ice-breaking shuttle tanker (ice class – ARC6) belonging to OAO Sovcomflot (SCF Group), has been the subject of a Greenpeace protest, while at the Port of Rotterdam carrying a cargo of 67,000 tons of crude oil, loaded on the continental shelf of the Pechora Sea, Russia. “We are extremely disappointed that our vessel has been the subject of an irresponsible publicity stunt by Greenpeace, which occurred despite the measures taken by our ship and the port authorities, including the Coast Guard and the Marine Police.