The unloading of the final containership at the Frihamnen port in Stockholm marks the end of an era.The 1,349 TEU Dutch-flagged containership Essence unloaded the final cargo at Frihamnen on June 1, but the CTF container terminal will remain open until June 23 to allow customers to collect the last of their containers.Going forward, Stockholm's container cargoes will be redirected to the city's new freight port, Stockholm Norvik Port, which recently opened and is better equipped…

Unifeeder containership SCA Tunadal on Wednesday claimed the maiden call at Sweden’s newest freight port, Stockholm Norvik Port, following the completion of a long port construction project.The container terminal is now open, both for vessel calls and for shore-based business operations at the port. The 32 hectare container terminal is run by Hutchison Ports, one of the world’s largest container terminal operators, with 52 ports in 27 countries.Nine goods in 10 arrive in Sweden by sea, and the Stockholm region accounts for half of Sweden’s entire consumption. 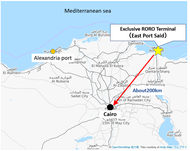 NYK, Bolloré Africa Logistics (Bolloré) and Toyota Tsusho Corporation (Toyota Tsusho) have signed an agreement with the General Authority for the Suez Canal Economic Zone to set up and operate a dedicated automotive terminal at East Port Said in Egypt.The automotive market in Egypt is expected to expand along with population growth and economic development, and the Alexandria port, which currently handles almost all of Egypt’s vehicle imports, is a multipurpose port that sees a variety of cargo and lacks storage space.

A consortium led by Toyota Tsusho Corp, a unit of Japan's Toyota Group, signed a contract on Thursday to set up and operate a roll-on, roll-off vehicle terminal at East Port Said in Egypt, the Suez Canal Economic Zone (SCZone) said.The consortium, which also includes Bollore Africa Logistics and Nippon Yusen Kaisha, will develop and operate a 600-metre quay and a new 21.2-hectare terminal for the import, export and transshipment of vehicles, an SCZone statement said.It will invest $150 million in equipment and infrastructure to enable the terminal to handle 800,000 vehicles a year, plus an ann

Ecoslops, the producer of recycled marine fuels from oil residues, and Suez Canal Economic Zone signed a new agreement, further to the signature of an agreement for a detailed feasibility study in January 2018.A press release said that the firms take another step towards the implementation of a collection, reception and treatment unit of maritime oil wastes, under the auspices of the French and Egyptian governments and on the occasion of the State visit of President Macron in Cairo.The new agreement…

Mediterranean Shipping Company (MSC) has launched in Le Havre its first RO-RO service now connecting HAROPA to West Africa twice a month. The new service confirms the assets of HAROPA, the leading French port system constituted by the ports of Le Havre, Rouen and Paris, for the reception of Ro-Ro shipping Lines. Of a unit capacity of 6,700 cars, the MSC Immacolata has opened this new fortnightly connection today: from the Ro-Ro terminal in Le Havre, it connects the ports of Antwerp (Belgium)…

Following the close of its 2017 fiscal year (FY17), the Panama Canal announced that the waterway welcomed a record 403.8 million Panama Canal tons (PC/UMS) of cargo in FY17, the largest amount of annual tonnage ever transited in its 103-year history. The 22.2 percent increase from the previous year can be directly attributed to the added capacity provided by the Expanded Canal. According to figures, the Panama Canal transited a total of 13,548 vessels during its FY17, representing a 3.3 percent increase compared to totals the year before.

More Cars Shipped Via The Port Of Gothenburg

After a marked downturn in container traffic between Hamburg and Russian ports on the Baltic last year, in the 2016 first half container handling at 216,000 TEU (20-ft standard containers) again achieved an increase of 2.3 percent. That seaborne foreign trade between Hamburg and the Russian ports is again picking up despite ongoing economic sanctions was warmly welcomed among the 240 guests at Hamburg’s traditional Port Evening in St. Petersburg. Organized by the Port of Hamburg Marketing Representative Office in St.

Melbourne International RoRo & Automotive Terminal (MIRRAT) will officially open at Webb Dock West in Melbourne on the 10th April, 2016. MIRRAT is dedicated to providing best in class terminal services to the Automotive and RoRo markets in Melbourne by providing efficient, innovative and sustainable solutions to our customers. As part of Port of Melbourne Corporation’s port capacity project, MIRRAT was awarded the rights to design, construct and operate the new RoRo & Automotive Terminal at Webb Dock West.

NYK signed a joint-venture agreement with Ports Development Company (PDC)* to establish NYK’s first exclusive RORO terminal operating company at King Abdullah port (KAP)** on the Red Sea coast of Saudi Arabia. This terminal named KAP RORO Terminal, which is the first exclusive RORO terminal in Saudi Arabia, is planned to commence full operations by 3rd quarter 2016. The joint venture will be the first automotive logistics base for the NYK Group in the Middle East. King Abdullah port is a private port which is owned and developed by PDC, which opened a container terminal there in 2014.