Sir Richard Branson has stepped down from his role as chairman of Virgin Hyperloop One, saying the company "needs a more hands-on chairman."DP World statement said Branson was stepping down due to the increased commitment of time the position requires.Following the resignation Branson DP World, the largest shareholder in Hyperloop, said it was looking for a new chairman to take the company to the next stage of growth.Commenting on the announcement, Sultan Ahmed Bin Sualyem, Group Chairman and CEO of DP World…

Virgin Cruises to Sail Out of Miami in 2020

Virgin Cruises will launch its first luxury liner in 2020 from Miami, British tycoon Richard Branson announced, placing his bets on medium-sized "boutique" ships. The Virgin Group founder said he had signed a binding letter of intent with Italy's Fincantieri to build three 110,000-ton ships, to debut in 2020, 2021 and 2022. Each ship would carry 2,860 passengers, based on double occupancy, and 1,150 crewmembers. With characteristic flair, Virgin Group founder Richard Branson, sporting a skipper's hat, arrived in downtown Miami's Museum Park via helicopter and a cloud of Virgin-red smoke.

Renowned marine wildlife artist and conservationist Dr. Guy Harvey and Sir Richard Branson are calling on individuals and corporations to sponsor shortfin mako sharks that will be tagged and released off the coast of Isla Mujeres, Mexico later this month. Dr. Harvey and his foundation, Guy Harvey Ocean Foundation, along with the Guy Harvey Research Institute at Nova Southeastern University, have created an innovative race that allows businesses and/or individuals to sponsor sharks through the purchase of satellite tags.

DeepFlight announced it will introduce a new type of personal submarine at the 2014 Monaco Yacht Show. The company said its new product, the DeepFlight Dragon, is the most compact, lightweight personal submarine on the market, and is so intuitive to use that clients self-pilot the craft with minimal instruction. The all-electric (zero emissions) DeepFlight Dragon was designed specifically for easy use from yacht or shore to explore the twilight zone down to 400 feet (120 meters).

U.S. authorities resumed a hunt on Tuesday for four British yachtsmen missing in the Atlantic Ocean after a public appeal backed by UK politicians and British billionaire Richard Branson not to give up on finding them just yet. The sailors on board the yacht Cheeki Rafiki went missing on Friday as they were returning to Britain from a sailing event in Antigua in the Caribbean and reported that the vessel was taking on water, forcing them to change course to head to the Azores. The U.S. Coast Guard, supported by U.S. 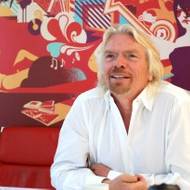 Sir Richard Branson is a last minute addition to the list of speakers at All-Energy 2014. The U.K.’s renewable energy exhibition and conference is being held at Aberdeen Exhibition and Conference Centre (AECC), May 21-22. Speaking live from his renowned Necker Island base, Sir Richard will be joining the conference on Thursday, May 22, through the medium of Skype; his presentation will take place at the end of “Investing in the future – innovation” a session devoted to innovation in the offshore wind sector (Crombie B at AECC).

Plymouth boatyard looks to refit Richard Branson's iconic 'Virgin Atlantic Challenger II' after the boat's 20-year absence from UK shores. Dan Stevens, a merchant navy master who also runs the Mount Batten ferry and harbour cruise vessels in Plymouth, discovered the powerboat languishing in a boatyard in Majorca, where she has been laid up for more than seven years, reports 'Plymouth: The Herald'. Stevens is flying out a crew within days to carry out a basic refit to make her seaworthy…