Konecranes has introduced the next evolution of its Automated Rubber Tired Gantry (ARTG) System, version 2.0.It can be retrofit to most brownfield container terminals. It fits most container stack envelopes. And truck handling is automated, with remote supervision.In 2013, Konecranes was the first company in the world to introduce an Automated Rubber Tired Gantry (ARTG) System on a wide commercial scale. A number of container terminal operators are now using the system. Recently…

The smart terminal solutions provider Konecranes has received another order for the delivery of an Automated RTG (ARTG) System to PT Prima Terminal Petikemas, a subsidiary of state-owned port operator PT Pelabuhan Indonesia I (Persero).The ARTG system on order includes 12 ARTG cranes with associated software, interfaces and services, said a press release from the company.The 12 ARTGs will be delivered in January 2020 to Belawan Container Terminal, Phase 2 in Medan, North Sumatra.

CMA CGM aims to increase its market share in Indonesia to 20 percent by year-end from the current 13 percent, reported The Jakarta Post. The company's senior vice president in Asia, Jean-Yves Duval said that with aggressive marketing, as well as longer and more efficient routes, we believe we can have 20 percent of the market by end of 2017. Recently, the Transportation Minister Budi Karya Sumadi and PT Pelabuhan Indonesia II President Director Elvyn G Masassya welcomed the arrival of the largest container ship CMA CGM Otello which berthed at Jakarta International Container Terminal.

On August 18, a new container terminal built by NYK Line together with PT. Pelabuhan Indonesia II (Persero) (IPC), Mitsui & Co. Ltd. and PSA International Pte Ltd  opened for commercial service at Tanjung Priok Port in Jakarta, Indonesia. This new terminal will be operated by the newly established company PT New Priok Container Terminal One. The terminal will have an annual handling capacity of approximately 1.5 million twenty-foot equivalent units (TEUs) of containers, an overall berth length of 850 meters and a 16-meter draft…

Indonesia Port Corporations (IPC) or PT Pelabuhan Indonesia (Pelindo) II, Indonesia’s state-owned port operator is to build 22 ports in the country in the next five years for an anticipated cost of around $3.5 billion. “We are targeting to build 22 ports from Belawan to Sorong within five years,” Pelindo II chief executive Richard Joost Lino said. The Indonesian port projects are to be financed by cash and loans and once completed each will have a capacity of 2.5 million TEUs. 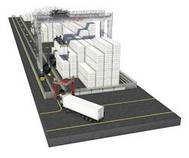 Konecranes iforms it has received a repeat order for an automated RTG (ARTG) system from PT Pelabuhan Indonesia III (Pelindo III) in Indonesia. The system includes nine automated RTG cranes. It will be delivered to Terminal Petikemas Semarang (TPKS), an operational terminal in Central Java, at the end of 2016. The order is part of the second-quarter order intake. “Konecranes delivered the cranes and the complete automation system to Indonesia’s first automated terminal, which was recently opened.

It was an historic moment for Indonesia when President of Indonesia inaugurated the Lamong Bay Terminal in Surabaya, East Java, operated by state-owned PT Pelabuhan Indonesia III (Pelindo III). The Lamong Bay is the first green-concept container terminal in the country, and will increase the port’s annual capacity from 1.5 million to 3.5 million TEUs. Once fully operational, the total capacity of this bay terminal will be 5.5 million TEUs. "We have forgotten and I need to remind that two-third of Indonesian regions are water… 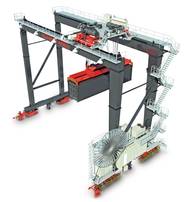