Estonian port authority Port of Tallinn (Tallinna Sadam) has signed an agreement with compatriot construction company YIT Eesti AS for the construction of new cruise terminal in Tallinn Old City Harbour.The value of the contract is EUR 13.7 million. New cruise terminal will be completed in July 2021.The contract includes a 3-storey terminal building with a net area around 4000 m2, pedestrian promenade area at the pier, children’s playground and parking spaces.The multifunctional…

Estonian port authority Tallinna Sadam (Port of Tallinn) announced that starting from next year the ships that have joined the Environmental Ship Index (ESI) can apply for discount on tonnage fees of up to 8%.The Baltic Sea port said in a press release that the new port pricing system involving differentiated port fees is aimed at encouraging shipping companies to adopt environmentally friendlier technologies and thus also contribute to the health of Baltic Sea ecosystem.The head…

The largest port in Europe the Port of Rotterdam Authority has been awarded the European Sea Ports Organisation (ESPO) Award 2018.The award was made in recognition of the port's engagement with the city or wider community through the creation of a good workplace environment for its current and future employees and the demonstration of its investment in a diverse and inclusive environment, facilitating mutual respect, non-discrimination and personal development.The ESPO Award was handed out by the Deputy Director-General of DG Move…

In the first quarter of 2018, 5.01 million tons of cargo and 1.92 million passengers passed through the harbours of Port of Tallinn. The cargo volume increased by 0.3 % and passenger number by 0.2 % compared to the same period last year. According to Port of Tallinn’s CEO Valdo Kalm the comparison of the results of the first quarter shows a positive sign in cargo volume in a long time. "The decline in cargo volume has stopped and even shows a slight increase, mainly due to the growth of ro-ro and dry-bulk goods transported through the harbours of Port of Tallinn.

Starting in 2018, all ships that use liquefied natural gas (LNG) as their primary fuel can apply for a discount of four percent on tonnage fees when calling at harbours of the Port of Tallinn. The goal of the discount is to contribute to the adoption of environmentally friendlier technologies in the Baltic Sea shipping sector. “Similarly to other ports in the European Union and Norway, the Port of Tallinn has set a course toward environmentally differentiated port fees, with the aim of reducing the amount of air pollution and marine pollution from ships’ waste handling and gaseous emissions…

Estonian Port Passenger Number Up in June, Cargo Volume Down

The ports of the Estonian state-owned port operator Tallinna Sadam (Port of Tallinn) handled in June 1.68 million tonnes of cargo and serviced 1,045,461 passengers. Compared to the same period last year, the cargo volume dropped by 25% while the number of passengers was by 1.3% higher than last year. In six months, the ports handled 4.4 million passengers which is 0.6 percent below last year’s level. The most popular route was Tallinn-Helsinki with 0.82 million passengers, followed by Tallinn-Stockholm line with 90,369 thousand people and Tallinn-St Petersburh line with 11,773 people.

The Port of Tallinn has signed contracts with Remontowa Shipbuilding and Sefine Shipyard shipbuilding facilities for the construction of four new car-passenger ferry boats to be used on the lines between the mainland and major Estonian islands; two ferries are to be built by each shipbuilding facility. The four new ferry boats, designed by the Norwegian company LMG Marin, will be constructed in the shipbuilding yards located in Gdánsk, Poland and Altinova, Turkey. The ferries are to be 114 meters in length with accommodation for 150 cars or 10 road trains…

Gennady Timchenko, the billionaire Russian gas trader hit with U.S. sanctions over his alleged ties with the Kremlin following Russia's annexation of Crimea, said being singled out by Washington was a badge of honour. But Timchenko, who sold his stake in oil trading firm Gunvor last month, acknowledged that the sanctions were slightly inconveniencing his business interests because some European banks were reluctant to deal with him. "The fact that I was included in the list (of people subject to U.S. 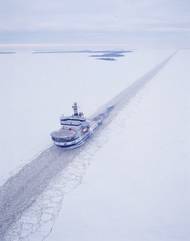 Port of Tallinn signs the purchasing agreement for icebreaker 'MSV Botnica'. The 50 million euro agreement is with the Finnish shipping company Arctia for the outright purchase of the icebreaking vessel. MSV Botnica is a multipurpose icebreaker built in 1998 by Aker Finnyards in Rauma, Finland. Her ice class is ICE-10, length (LOA) is 97.3 and beam 24.3 metres. The maximum speed of MSV Botnica is 16.5 knots in open water; she can maintain a speed of 8 knots in ice up to 80cm thickness. The maximum ice thickness in which the ship is capable of maintaining constant speed is 1.2 meters.