Record cargo imports are causing delays that are rippling from the nation’s busiest U.S. port complex to other parts of the transportation network, port officials and other executives said.Total volume at the Port of Los Angeles hit 980,729 20-foot equivalent units (TEU) in October, up more than 27% versus the year earlier. Loaded imports, which accounted for more than half of shipments, jumped 29% - marking the third consecutive month of robust growth.The typical holiday shipping…

Port of Los Angeles container volumes hit an all-time high in August, as importers restocked warehouses and retailers prepared for the upcoming holiday season, but officials warned that uncontrolled spread of COVID-19 remains an economic threat."The future of the economy really depends on the future of the pandemic, and the path of the virus right now continues to be the biggest uncertainty," said Jonathan Gold, vice president of supply chain and customs policy at the National Retail Federation.Total volume at the busiest U.S.

The Los Angeles-based maker of Exploding Kittens and Throw Throw Burrito board games ordered 1 million extra units from its factory in China with the hope of preventing coronavirus from ruining its Christmas sales.The move from the company, which sells product through Target, Walmart and Amazon.com, comes as  U.S. suppliers and retailers have been rebuilding depleted inventories and battling uncertainty by stockpiling pandemic sellers such as toys, refrigerators, home furnishings and booze.In the last few months…

Imports at major U.S. container seaports could hit their lowest level in four years as the novel coronavirus pandemic pummels a U.S. economy that was already grappling with negative effects of the U.S.-China trade war, experts said.Total container imports could fall 9.4% in 2020, according to the National Retail Federation (NRF) and Hackett Associates' Global Port Tracker report.That reflects pain in the U.S. retail sector, which is smarting from government-mandated store closures…

Cargo volume at the Port of Los Angeles is down 15.5% so far this year as the novel coronavirus upends economies around the globe, Gene Seroka, executive director of the busiest U.S. seaport, said on a webcast on Wednesday.April volume was down 6.5% year-over-year as the financial and human toll of the pandemic come into focus in the United States and around the globe.Consumer demand for non-essential items has fallen off the cliff in the United States - where the pandemic is blamed for more than 71…

March imports dropped 26% at the Port of Los Angeles and 5% at the adjacent Port of Long Beach - the busiest U.S. sea trade gateways - as the novel coronavirus wrecked havoc on commerce around the globe.Imports at major U.S. 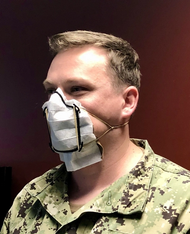 Naval Facilities (NAVFAC) Engineering and Expeditionary Warfare Center (EXWC) has responded to the COVID-19 pandemic through the use of the command’s additive manufacturing capabilities.NAVFAC EXWC will soon deliver the first batch of 250 face mask kits to commands needing additional PPE. Other commands will continue to coordinate with NAVFAC EXWC leadership for shipment of needed PPE, and subsequently update the additive manufacturing teams on further developing supplies.The face masks kits are being printed in three sizes: small, medium, and large.

February container volumes through America's largest cargo port were down significantly as the novel coronavirus continues to wreak havoc on global shipping.The Port of Los Angeles reports it moved 544,037 Twenty-Foot Equivalent Units (TEUs), a decrease of 22.9% compared to last year, and said it expects declines to continue in March.“While cargo volumes are important, the coronavirus is first and foremost a public health crisis that needs to be brought under control with the collaboration of governments and medical experts from around the world…

The Port of Los Angeles has announced a development opportunity for an Outer Harbor Cruise Terminal at Berths 46 and 50, with plans to release a Request for Proposal (RFP) later this fall.The proposal is intended for cruise lines, terminal operators, and real estate developers interested in creating a new state-of-the-art cruise terminal in a prime location for expansion of west coast cruise travel at America’s busiest port. Located on the south end of an extensive LA Waterfront development, the proposed 13-acre site offers unique panoramic views of the coastline and Catalina Island.

The Port of Los Angeles, the nation's busiest for ocean trade with China, processed fewer containers of imported and exported goods in October as the U.S.-China trade war roils the domestic economy and global supply chains.October imports dropped 19% to 392,768.6 TEU - or 20-foot equivalent unit - versus a year ago. Exports also fell 19%, landing at 140,331.5 TEU.