To encourage More women are joining the maritime ranks in a variety of professions within the industry and with a view to continuing the momentum to empower women in the maritime community, International Maritime Organization (IMO) is supporting a training course aimed at female officials from maritime and port authorities.Twenty-two women from 10 francophone countries in Africa - Algeria, Burkina Faso, Cameroon,  Côte d'Ivoire, Djibouti, Guinea, Madagascar, Senegal, Seychelles and Togo -…

Generale de Manutention Portuaire (GMP), a joint venture between Dubai-based trade enabler DP World and French shipping line CMA CGM, has been awarded the service concession for the construction and operation of berths 11 and 12 at Port 2000 in Le Havre.According to a press release from the French port, the terminals of Port 2000 In Le Havre are trade-enabling gateways for cargo entering the French consumer markets. Recognizing the strategic importance of Port 2000, GMP has been…

Hamburg Süd has strengthened its product portfolio on the Europe with new stand-alone service offered in collaboration with Maersk.The trade between Europe and Central America, Caribbean and South America West Coast has always been a key element in Hamburg Süd’s global network of liner services. In cooperation with Maersk, Hamburg Süd will be expanding and enhancing the services it offers on this core trade beginning in June 2019.According to a press release, the serice will have maximum flexibility for tailor-made solutions…

The trade between Europe and Central America, Caribbean and South America West Coast has always been a key element in the container liner shipping line Hamburg Süd’s global network of liner services.In cooperation with Maersk, Hamburg Süd will be expanding and enhancing the services it offers on this core trade beginning in June 2019.“Combining the strengths of Hamburg Süd and Maersk, we can offer our customers a best in class stand-alone service configuration without having to depend on vessel sharing agreements with other shipping companies…

Former port of Le Havre managing director Hervé Martel has started work as interim managing director of the Marseille Fos port authority following his nomination by the French transport minister. His appointment is now due to be officially ratified by the leading French port’s supervisory board. Martel joins the executive board in succession to Christine Cabau Woehrel, who left in March on completion of her five-year term to re-join Marseille-based CMA CGM as director of assets.Meanwhile Marc Forneri has been re-elected for a second five-year term as supervisory board chairman.

The cargo-handling solutions provider Kalmar is to supply DP World with a total of 63 Kalmar Hybrid Straddle Carriers for use at four of its European container terminals: 12 units will be delivered to GMP in Le Havre, France; 20 units to Eurofos in Marseille, France; 19 units to Antwerp Gateway in Belgium; and 12 units to DP World Southampton in the UK.The order was booked in Cargotec's 2019 Q1 order intake, and the majority of the machines is expected to be delivered by the end of 2019…

France-based Port Community System operator SOGET, in close collaboration with French customs, port authorities, ferry companies and road hauliers, will offer an integrated e-freight corridor based on a digitalized anticipation of information flows related to cross-Channel goods."Cross-channel RO-RO traffic of trucks and its logistics’ fluidity in ports are crucial matters for the competitiveness of the Great-Britain - Europe corridor. With 5 million trucks on the coastal border territory…

France's CMA CGM, one of the world's largest container-shipping lines, remains interested in seeking acquisitions despite bringing to an end its interest in German peer Hapag-Lloyd, its chief executive said on Thursday."The shipping sector is consolidating further and if there are opportunities the CMA CGM group ... is able to be in the running for a new deal," Rodolphe Saade told Reuters on the sidelines of a ship launch ceremony at the northern French port of Le Havre.Regarding Hapag-Lloyd…

Kalmar, part of Cargotec, has been awarded a contract to heighten four ZPMC ship-to-shore (STS) cranes operated by Generale de Manutention Portuaire (GMP), a joint venture between DP World and Terminal Link (CMA-CGM), located in the port of Le Havre.The order was booked in Cargotec's 2018 second quarter order intake, and the project is scheduled to commence in the 3rd quarter of 2018.Guy Sansone, Technical Director, GMP: "The decision to partner with Kalmar was placed mainly because of their proven track record and the technical expertise of their dedicated crane upgrades team.

IMO on Women in Port Management

The European Sea Ports Organisation (ESPO) congratulates Port of Rotterdam (Netherlands), Port of Le Havre (France) and Port of Piraeus (Greece) for renewing EcoPorts’ environmental management standard (PERS). Isabelle Ryckbost, ESPO’s Secretary General, Eamonn O’Reilly, ESPO’s Chairman, and Sotiris Raptis, EcoPorts coordinator, handed over the PERS certificates to the ports’ representatives during the annual ESPO Conference in Rotterdam. “I would like to congratulate the three ports for obtaining once more the environmental standard of EcoPorts (PERS).

Mediterranean Shipping Company (MSC) has launched in Le Havre its first RO-RO service now connecting HAROPA to West Africa twice a month. The new service confirms the assets of HAROPA, the leading French port system constituted by the ports of Le Havre, Rouen and Paris, for the reception of Ro-Ro shipping Lines. Of a unit capacity of 6,700 cars, the MSC Immacolata has opened this new fortnightly connection today: from the Ro-Ro terminal in Le Havre, it connects the ports of Antwerp (Belgium)… 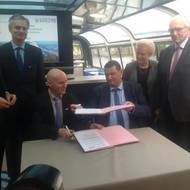 The Port Authority of Strasbourg (PAS) in France and port operator HAROPA of the Port of Le Havre have inked an agreement regarding four areas of cooperation – in rail, river and sea, innovation, and promotional capabilities, PAS said. "In the presence of Catherine Trautmann, Chairman of PAS, Jean-Louis Jérôme, Executive Director of PAS, and Hervé Martel, Vice-president of HAROPA & Executive Director of HAROPA-Port of Le Havre, have signed a partnership agreement aiming at enhancing their cooperation," said a press statement.

Female officials from maritime and port authorities from developing countries are attending a training course aimed at improving management and operational efficiency of their ports. Hosted in Le Havre, France (27 November - 8 December), women from 21 countries are taking part in the two-week course entitled "Women in Port Management" which includes lectures on subjects such as port management, port security, port marine environment, facilitation of maritime traffic, port marketing, port logistics and other topics.

The Maritime Prefecture of the Channel and the North Sea, in liaison with the CMA CGM Group and Les Abeilles (Bourbon Group), organized a towing exercise between a large container ship, the CMA CGM Marco Polo, and the Abeille Languedoc, including an ‘intervention’, ‘assistance’ and ‘rescue tug’ (RIAS), off the coast of Le Havre. Thus on y, July 21, 2017 from 1:00 pm to 4:40 pm off Le Havre, the CMA CGM MARCO POLO simulated engine damage to enable the crew of L’Abeille Languedoc…

An Iranian oil tanker has called at a European port for the first time since the lifting of sanctions last January, IRNA news agency reported quoting Sirous Kianersi,  managing director of the National Iranian Tankers Company (NITC). Sirous said that the first NITC tanker leased to a major Spanish oil company docked at the Port of Algeciras just recently. More NITC tankers are heading to other European ports, he said, adding two vessels are currently en route to the Netherlands.

CMA CGM at the Heart of Paris Art Installation

Worldwide shipping group CMA CGM  announced that it is the main partner of the Monumenta 2016 art exhibition in Paris. CMA CGM has decided to be at the heart of the creation of the masterpiece, by providing its containerships, containers and its technical and logistical expertise. Featuring globalization, artist Huang Yong Ping often uses metaphors in his art inspired by the sea. Monumenta 2016 follows this direction by integrating elements of the shipping industry into this installation.

APL today announced that it has reduced its fleet carbon dioxide emissions by 45.5% in 2015, compared to its emissions level in 2009. This achievement marks APL’s highest carbon dioxide emissions reduction in the last six years. “APL has steadily reduced its year-on-year carbon emissions and this demonstrates the company’s unyielding focus on sustainable shipping,” said Kenneth Glenn, APL President. APL attributed its carbon emissions reduction to improvements in operational efficiency…

Since 16 June 2016, HAROPA - Port of Le Havre, # 1 French port complex, displays itself in three dimensions through the development of its software package S-WiNG©. The occasion for the professionals and the general public to virtually plunge into the environment of the Normandy port, to go into the heart of its daily activities and draw a wealth of information from them. time from a computer, a tablet or a smartphone. Every vessel present in the harbour waters is represented according to its category (container ships…

APL has been named the ‘Best Green Shipping Line’ by HAROPA, the French port of Le Havre, Rouen and Paris on 7 September 2016. For the second year in a row, HAROPA is recognising APL’s exemplary environmental performance in reducing air emissions beyond the International Maritime Organization’s standards. Dennis Yee, APL Head of Global Safety, Security and Environment said, “We are honoured to receive the accolade from HAROPA. The Award is an affirmation of our practices towards green and responsible shipping.