Is Port of Amsterdam in sight? Then it's time to turn the diesel engine off and the electric motor on. That's the agreement that has been made with Sendo Shipping.By 2020, two of their Sendo Liners will be entering the port of Amsterdam emission-free. Port of Amsterdam has a stake in these new ships in the form of a loan.The Sendo Liners are inventive hybrid container ships. Much lower emissions, much lower fuel consumption and more cargo space. No less than 8% extra loading capacity!

The US-based Taronis Fuels will be launching its first-ever production facility in Western Europe in the port of Amsterdam. The new site will be dedicated to the production of bio-based welding gas, a fuel type commonly used in the construction and shipbuilding industries.Taronis Fuels, a wholly-owned subsidiary of Taronis Technologies, decided on Amsterdam on account of its strong focus on sustainability and innovation, combined with a fertile sales market due to its proximity to the sea…

Dutch seaports processed a record volume of goods in 2018 as the throughput of containers increased the most, reported the Central Bureau of Statistics (CBS).According to Statistics Netherlands (CBS), the total volume of incoming and outgoing cargo shipments to and from Dutch seaports reached a historic high of almost 605 million tonnes in 2018."This is an increase of over 1.5 percent relative to 2017. At 4.5 percent, container transhipment saw the highest increase," CBS said.Two-thirds of cargo handling in Dutch seaports consisted of unloaded goods in 2018.

Titan LNG held the christening event for the FlexFueler001 in collaboration with the Port of Amsterdam. This event marks the official commencement of safe, efficient and cost-effective inland waterway LNG bunkering in the ARA region.At the event in the Port of Amsterdam a mix of LNG enthusiasts gathered, including customers, business partners, and manufactures of the FlexFueler. Yvonne Brouwer, the partner of Niels den Nijs (CEO Titan LNG) performed the ceremony and broke the champagne bottle across the bow whilst wishing the vessel and the crew smooth sailings.At the moment…

Norwegian Cruise Line (NCL), the third-largest cruise line in the world, controlling approximately 8.7% of the total worldwide share of the cruise market by passengers, celebrated its first season of cruises from the Netherlands, Amsterdam with the European debut of Norwegian Pearl.The international cruise liner said that with this maiden call it is growing the brand’s presence to six ships in the region for the first time.On Saturday, 8 June, Norwegian Pearl’s Captain, Paul von Knorring…

Port of Amsterdam realised net profit of EUR 68.5 million in 2018, which represents a 12.5% increase compared to 2017 (net profit of EUR 60.9 million).Revenue rose slightly in 2018, rising 5 percent to EUR 157.4 million, primarily due to a record amount of land allocations totalling 45.1 hectares (2017: 18 hectares) and an increase in harbour dues owing to a record level of transhipment totalling 82.3 million tonnes of cargo (2017: 81.3 million tonnes).The annual figures show a financially healthy position for Port of Amsterdam, which is benefitting from the favourable economic climate.

Singapore-headquartered international petroleum storage and logistics provider Global Petro Storage (GPS) has entered into an agreement with the Port of Amsterdam to develop a railcar connection on land adjacent to GPS' existing 11-tank gasoline and bioguel storage and blending facility.GPS intends to develop a rail connection to the public network and to points across Europe that will increase its efficiency and offerings to clients.Port of Amsterdam endorses the importance of good rail connections to and from the Amsterdam port region. Transport by rail is safe and sustainable.

To keep traffic flowing around the ferry terminal in IJmuiden Seaport, Netherlands, in the event of a no-deal Brexit, preparations are underway for a temporary lorry parking location.According to a press release from the Port of Amsterdam Authority, a plan is also being drawn up to ensure that traffic flows smoothly. The measures are intended to minimise delays caused by additional customs formalities at the ferry terminal and to secure the transit of goods to and from the UK.The…

Inland shipping is essential for the transportation of containers on the Amsterdam-Utrecht-Rotterdam route. 250,000 containers are transported annually via this routeTMA Logistics, CTU and VCL join forces to establish the North West Central Corridor. This cargo consolidation will result in a more reliable barge product, more sustainable transport and fewer handling delays at the terminals.The initiative is supported by the deep sea container terminals in Rotterdam, Port of Amsterdam…

Shipping Activity Up in Amsterdam Port

Netherlands' port of Amsterdam welcomed a total of 41,424 barges and 7,525 sea-going vessels in 2018, including 180 sea cruise ships. The numbers for 2017 were 40,012 and 7,011, respectively.The seaport in Amsterdam said in a press release that while the number of shipping accidents increased from 32 in 2017 to 49 in 2018, the number of serious shipping accidents remained virtually level from 2017. One fatal accident unfortunately occurred in the port in 2018.Although the port saw an increase in shipping activity levels in 2018…

Port of Amsterdam has launched a Cybersecurity Programme to increase the port community's digital resilience.A press release from the port has explained the rationale behind the launch: "The Netherlands is one of the world's top three countries affected by cyber attacks. Ports are particularly vulnerable, as they have a wide range of information systems and their data is used by many different parties."Information systems contain valuable information that makes them an appealing target for cybercrime.

The first of a total of three lock gates for the new sea lock has arrived at IJmuiden harbour in the Dutch province of North Holland.According to Port of Amsterdam Authority, the lock gate was towed by a tug across the North Sea to its final destination. On its way from South Korea to IJmuiden - with a stopover at Maasvlakte 2 - the lock gate has covered a total of more than 26,000 km. The transport over the last 150 km took 30 hours and went smoothly.Minister of Infrastructure and Water Management…

The construction activities on the site of the new sea lock in IJmuiden are in full swing, said Port of Amsterdam.More than 200,000 m3 of concrete have now been poured and still more will be poured in January and February, including concrete for the inner lock head (number 1 in the picture) and for the lock chamber (number 3 in the picture).Also in January and February, work will continue on the completion of the lock gates and on the local control buildings - which are now taking shape (numbers 4 in the picture).After a 44-day voyage from South Korea via Cape of Good Hope…

Record Transshipment at Port of Amsterdam in 2018

Nouryon (formerly AkzoNobel Specialty Chemicals), Tata Steel and the Port of Amsterdam have joined together to study the feasibility of a large green hydrogen cluster in the Amsterdam region.According to a press release, the three parties consider green hydrogen as vital for reaching climate targets and building a more circular economy, for example by combining it with emissions from steel manufacture to make new products.As a first step, the parties will study the feasibility of a 100 megawatt water electrolysis facility to produce up to 15…

To accommodate increasingly larger ships, a new sea lock is being built at IJmuiden, a port city in the Dutch province of North Holland.The construction started in 2016. It will be the largest sea lock in the world. The sea lock ensures that ships can access the ports and port businesses along the North Sea Canal in a safe and efficient way, irrespective of the tide.The new sea lock will be 500 metres long, 70 metres wide and 18 metres deep. The project is a joint venture of the Ministry of Infrastructure and Water Management… 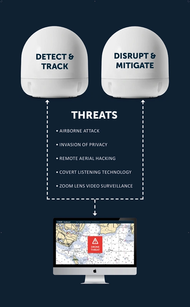 M.A.D.S (Marine Anti Drone Systems), a drone detection system, announced a four-week trial of its system by Port of Amsterdam.The focus of the trial for the Port is to build understanding of how, where and why drones are flying over the Port of Amsterdam.The Port has identified the potential of drones for numerous use applications across its, and its customers’ operations. This trial will monitor their use. Many Port customers are preparing to use drones for infrastructure inspection and measurement of environmental parameters.

The circular plastics hub in the Port of Amsterdam is expanding through the construction of a new plastics recycling plant. Plastic Recycling Amsterdam (PRA), a collaboration between Umincorp and Milieu Service Nederland, commenced construction of a plant this week.The Dutch port said that this plant, which can be expanded on a modular basis, will initially process 17,000 tonnes of plastics annually and prepare them to be reused.In the plant, the collected plastics are first washed, shredded and then routed through a magnetic bath.