Star Bulk Carriers Back in Black

Star Bulk Carriers has announced a net income of US$10.73 million for the second quarter of 2018, a significant improvement over the company’s net loss of US$10.28 million for the same period last year.The global shipping company focusing on the transportation of dry bulk cargoes said that voyage revenues for the quarter totalled US$132.6 million, almost double the US$78.6 million generated in the second quarter of 2017.Petros Pappas, Chief Executive Officer of Star Bulk, said…

Star Bulk Carriers announced that it has closed the previously announced acquisition of three  newbuilding Newcastlemax dry bulk vessels in an all-share transaction, from Oceanbulk Container Carriers (OCC). The final consideration for the OCC Vessel Purchase Transaction is 3,304,735 million common shares of the Company. OCC is an entity affiliated with Oaktree Capital Management and with family members of our CEO, Petros Pappas and entities affiliated to them. The three vessels are being constructed at Shanghai Waigaoqiao Shipbuilding (SWS)…

Greece-based dry bulk shipping firm Star Bulk Carriers has entered into definitive agreements to acquire 18 dry bulk vessels in two all-share transactions. 15 of the vessels will be acquired from Songa Bulk and three of the vessels will be acquired from Oceanbulk Container Carriers. The consideration for the vessels was determined based on average vessel valuations by independent vessel appraisers. The Company has agreed to issue an aggregate of 13.725 million common and pay $145 million in cash for the acquisition of all of Songa’s 15 modern dry bulk vessels .

Star Bulk Carriers, a global shipping company focusing on the transportation of dry bulk cargoes, announced the expansion and diversification of the Company's commercial activity with the launch of the new subsidiary Star Logistics Management S.A. Star Logistics will focus on servicing the end user by connecting origination and destination of dry bulk commodities. The move is expected to further expand the commercial capability of Star Bulk through additional commercial expertise and advanced tools on the Kamsarmax and geared bulk carriers.

Star Bulk Carriers has sold three vessels during the third quarter, a modern Supramax and two 90s built Panamax says Petros Pappas, Chief Executive Officer. Net sales proceeds for completed vessels sales were approximately $27.9 million in Q3 and we also received approximately $3.8 million of gross sales, proceeds from the sale of an unlevered 90’s built Panamax and we expect 11 million in net equity proceeds from the transfer of a newbuilding which proceeds will be received in 2016.

Star Bulk entered into a definitive agreement with Excel Maritime Carriers Ltd., and as a result, will acquire 34 drybulk vessels for an aggregate of 29.917 million shares of common stock of Star Bulk and $288.39 million in cash. Star Bulk Carriers Corp. announced today that it has entered into definitive agreements with Excel Maritime Carriers Ltd. pursuant to which the company will acquire 34 secondhand operating drybulk carriers, consisting of six Capesize vessels, 14 sistership Kamsarmax vessels… 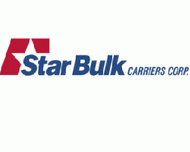 Star Bulk Carriers Corp. (Nasdaq: SBLK),a global shipping company focusing on the transportation of dry bulk cargoes, today announced that it has entered into definitive agreements to acquire two Capesize bulk carriersfor an aggregate purchase price of approximately $51.5 million. The first Capesize vessel has a carrying capacity of approximately 168,000 dwt and was built in South Korea in 1996. This vessel has a time charter agreement with a major mining company until November 2015 at the earliest, at a gross daily rate of $25,000.