Customs authorities in Hamburg and Antwerp have seized a record haul of more than 23 tonnes of cocaine destined for the Netherlands in two raids this month, Dutch prosecutors said on Wednesday.The two shipments together represented a street value of roughly 600 million euros ($730 million), the prosecutors said, making it the biggest catch of cocaine headed for the Netherlands ever.Prosecutors said a 28-year old Dutchman had been arrested on Wednesday who was registered as the recipient of the containers in which the drugs were found.In Hamburg, Germany, 16.17 tonnes of cocaine were found in o

Evergreen Line took delivery of its sixth and seventh new 12,000 TEU class F-type containerships on December 15. Ever Forever was built at the Geoje Shipyard of South Korea's Samsung Heavy Industries, and Ever Far was delivered by Imabari Shipbuilding in Japan.The two new large containerships set sail in good order after the delivery procedures were completed. The ships’ 58,000-horsepower main engines are powering the technically advanced vessels to their allocated loading ports on Evergreen’s trans-Pacific services. Ever Forever will be put into service on the Asia-U.S.

Japan’s exports fell in September at the slowest pace in seven months as U.S.-bound vehicle shipments rose from lows brought about by the COVID-19 pandemic, indicating easing pressure on the world’s third-largest economy.Exports fell 4.9% in September compared with the same month a year earlier, more than the 2.4% economists forecast in a Reuters poll. Still, the pace followed six months of double-digit decline, including a 14.8% drop in August.Fewer exports of iron to Taiwan and ships to Panama left September marking the 22nd consecutive month of export decline…

PDVSA Changes Oil Deals to Include Shipping as Sanctions Bite

Venezuelan state-run oil firm PDVSA has begun offering to ship its own oil, figuring in the costs in crude supply deals to help customers who have struggled to hire vessels to carry the country’s oil due to U.S. sanctions, according to company documents seen by Reuters.The United States has blacklisted vessel owners, shipping operators and threatened to sanction any tanker facilitating the country’s oil exports as it tightens restrictions on trade with the South American country.Washington has been trying to weaken socialist President Nicolas Maduro by choking the OPEC member’s oil exports… 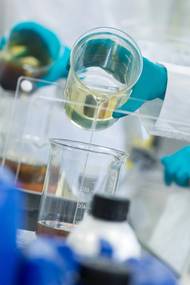 Total Lubmarine has extended the global reach of its technical support services with the opening of a new Diagomar Plus Laboratory in Chicago, Ill.The new lab opening means the marine lubricant specialist now has five centers around the world – with Chicago joining Ertvelde (Belgium), Singapore, Shanghai and Panama City.“North America is an increasingly busy market for us and the opening of the Chicago Lab ensures we have a specialist team on hand to deliver onshore dedicated technical support to our customers…

Six new all electric rubber-tired gantry (E-RTGs) cranes have been installed and are now in service at PortMiami's South Florida Container Terminal (SFCT).The new zero-emissions E-RTGs are cleaner and quieter than the older, diesel-powered top-loaders which previously worked in the container yard. Upon arrival in early January – the new equipment went through a 30-day testing and certification process by the manufacturer.SFCT is currently undergoing cargo upgrades as part of PortMiami's Master Plan.

The Panama Canal said on Wednesday it would make a temporary change to the payment system for ships booking passage through the waterway in order to offer more flexibility to customers affected by the coronavirus outbreak."As of May 4, 2020, the interoceanic highway will implement temporary changes to the requirements for making reservations and the advance payment of reservation fees upon confirmation," the Panama Canal Authority (ACP) said in a statement.Ships have hitherto had to pay fees within 48 hours of making reservations to transit.

A new throughput-maximizing facility opened in early April at Port Manatee is helping speed shipments of fresh produce to consumers of Florida and beyond.Port Manatee’s newly unveiled transfer facility, with room for 120 trailers, optimizes capabilities for expediting movement of cargo by freeing up near-dock yard space for stacking as many as 300 containers at a time.The 3.6-acre facility was completed in three months at a port investment of $916,093 while supporting 10 construction jobs.Shippers of produce through Port Manatee include Del Monte Fresh Produce Co.…

Owners of a factory ship moored off southern France which normally turns seawater into bottled mineral water have converted it to make sanitizing solution in the fight against the coronavirus.At the start of the year, the 179-meter long Odeep One began making bottled water pumped from the depths of the Mediterranean but since April 1 the plastic bottles which roll off its production line have contained alcohol solution instead.The French owners of the Panama-flagged ship currently produce just over 43…

A liquefied natural gas (LNG) tanker which loaded a cargo from the United States is currently heading to China, the first shipment since March 2019, according to shiptracking data from Refinitiv Eikon and Kpler on Monday.The tanker SK Resolute loaded the cargo from the Cameron LNG terminal on March 22 and was originally headed to Cristobal, Panama, according to shiptracking data from Refinitiv Eikon and data intelligence firm Kpler.It changed its destination to Tianjin in China on March 28 and is expected to arrive at the Chinese port on April 28…