The ITF has welcomed the positive outcome of the third meeting of the Special Tripartite Committee of the ILO (International Labor Organization) in Geneva. The STC has agreed on a new amendment to the Maritime Labor Convention (MLC) 2006 and will now be submitted to the next session of the International Labor Conference for adoption.The amendment, when it enters into force, will address a potential contractual gap for those seafarers who unfortunately fall victim and are held…

IBF secures the rights of dockers to do lashing

The International Transport Workers’ Federation's (ITF) expanded Fair Practices Committee Steering Group (FPC SG) met and approved the terms of the new International Bargaining Forum (IBF) on 23 February 2018 Agreement. In this it highlighted the new terms agreed in Article 4, Non-Seafarers Work or the “Dockers’ Clause”, as it is often referred to, as a significant development in securing work for dockers. The revised clause and the new implementation procedure clarifies the dockers’ right to carry out lashing and other cargo handling services in ports. 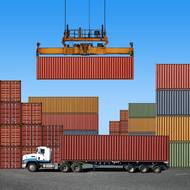 According to an announcement from the International Transport Workers’ Federation, an Indonesian worker who was killed on the job at the International Container Terminal Services Inc (ICTSI) facility in Jakarta overnight. According to the ITWF report, Local unions say the 40-year-old man was fatally crushed at 22.10 local time when a refrigerated container was dropped onto his truck, crushing the cabin and killing the driver, the second workplace fatality at the Port of Jakarta in three weeks.

The International Dockworkers’ Council (IDC), International Transport Workers’ Federation (ITF) and European Transport Workers’ Federation (ETF) are calling on dockers’ unions around the world to organise an hour of activities on International dockers’ action day next Thursday, 7 July. The aim of the day is to raise awareness with the public about the vital contribution dockworkers make to the world economy, the risks they face at work every day and to highlight the growing attacks on working conditions in ports. A tribute to fallen and injured comrades will be included. 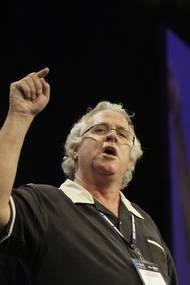 The ITF (International Transport Workers’ Federation)  called for all-party talks on the future of the port of Rotterdam, as dockers refused to unload a ship loaded at the new Rotterdam Gateway (RWG) terminal. RWG, unlike other companies at the port, refuses to negotiate a collective bargaining agreement with port workers, who are represented by the FNV Havens union. On Sunday the vessel Alsvin loaded containers at RWG, in what was believed to be a test operation. It then moved to the ECT terminal in Rotterdam to discharge them. Dockers refused to unload them.

The ITF (International Transport Workers’ Federation) has won a promise from the Honduran ambassador to the U.K. to investigate death threats and victimization of trade unionists in the city of Puerto Cortés. A high-level delegation made up of Steve Cotton, ITF acting general secretary; Paddy Crumlin, ITF president; Victor Crespo, president of the ITF-affiliated Sindicato Gremial de Trabajadores del Muelle (SGTM); and Tomas Abrahamsson, ITF maritime coordinator, won the assurance in a meeting with Ambassador Romero-Martinez yesterday.

The ITF is calling on governments and industry bodies to back a proposed amendment that will tackle the dangers posed by unweighed or mis-declared shipping containers. The amendment – to the existing Safety of Life at Sea Convention (SOLAS) – will be tabled at the present meeting of the IMO (International Maritime Organization) sub–committee on dangerous goods, solid cargoes and containers.The meeting will decide if the weighing of packed shipping containers will be made mandatory.

The ITF (International Transport Workers’ Federation) is pleased to announce the signing of a co-operation agreement with Bourbon, a major provider of marine services to the oil and gas industries in over 45 countries worldwide. The ITF states that this signing signals a continuing push for fairness and equality in the offshore industries. The purpose of the agreement is to create an open channel of information between CFDT / ITF OTFG and Bourbon about industrial relations issues in order to continuously improve and develop good work practices in all Bourbon entities worldwide.

Maritime Fatalities on the Rise in Australia

An Australian Transport Safety Bureau report shows a sharp increase in deaths & serious incidents in maritime & offshore sectors. The report, according to the ITF, found that between 2005 and 2012, 254 people were killed, missing or seriously injured in reported marine occurrences. In 2012, 154 such occurrences were reported – over 50 per cent higher than the 2005 to 2012 average of 100 per year. The Maritime Union of Australia said the report highlighted the urgent need for the federal government and its agencies to act to reduce the death and serious injury rates.

The ITF has condemned as ‘utterly unbelievable’ a totally unexpected decision by a court in Morocco to jail trade union leaders Said Elhairech and Mohamed Chamchati. Elhairech the general secretary of the Moroccan Ports Union, part of the ITF-affiliated UMT, and chair of the ITF Arab World regional committee, was arrested in June 2012 on charges of ‘sabotage and endangering national security’. He utterly rejected the accusations and was supported throughout by the ITF, which was…

Disruption due to Belgian port closures. Inchcape Shipping Services (ISS) has advised that a nationwide strike in Belgium on 30 January 2012 will close all ports in the country, with knock-on effects likely during the whole week. ISS anticipates that dockers, pilots, tugboats and locks operator will be involved, and that roadblocks with strike pickets will occupy all access roads to the ports. The company has been unofficially informed that terminals will close from 06:00hrs on 30/01/2012 to 06:00hrs on 31/01/2012.

ITF president and Maritime Union of Australia national secretary Paddy Crumlin today welcomed the passing of bills that secure the future of Australian shipping. The Australian government's landmark Shipping Reform Package bills today passed the Australian Parliament's House of Representatives with a narrow vote of 71 - 69. All of the speakers in favor made mention of the hard work of the Maritime Union of Australia (MUA) - its national secretary Paddy Crumlin and all the members involved.

The ILWU and ILA recently met in Washington, D.C.: first item on agenda was report on progress of East Coast USA contract negotiations. The meeting was attended also by ITF President and Maritime Union of Australia (MUA) National Secretary Paddy Crumlin and ITF Maritime Coordinator Steve Cotton. The first item of business was a report from ILA President Harold Daggett on the progress of the New East Coast contract, particularly on the outcome of negotiations on the introduction of automation to the terminals covered under the contract.

Dockers meeting at the ITF Maritime Roundtable in Casablanca issue 'Port Package Three' warning. Leaders of dockers’ unions affiliated to the ETF (European Transport’ Workers’ Federation and the ITF (International Transport Workers’ Federation) met at the ITF Maritime Roundtable in Casablanca to explore the future of dock work in Europe. Their meeting followed an action and information day on 25th September 2012 that was intended to send a strong signal to the European Commission (EC) on the day it held a European ports policy review conference in Brussels.

David Cockroft general secretary of the ITF (International Transport Workers’ Federation) since 1993 reaches retirement age. The announcement was made at the meeting of the ITF executive board in Copenhagen, Denmark, which also agreed to appoint Stephen Cotton, who is currently ITF maritime coordinator, as acting general secretary. David Cockroft explained: “Next year I will have been the chief executive officer of this remarkable global union federation for 20 years. “I am very happy that the board has decided to appoint Stephen Cotton to this position.

Union Hits Out at Vulture Fund Swoop on Tall Ship

TF president Paddy Crumlin condemns those responsible for seizure of 'Fragata Libertad', an Argentine navy training ship, in Ghana. The detention of the ship was ordered on application to a court by Elliott Capital Management, which has bought up debt associated with bonds on which the Argentinian government defaulted in 2001. He continued: “In trying to hold hostage one government over a dispute on sovereign debt by holding the Libertad hostage, Singer shows that he only holds one thing sacred: making more profit and building his wealth.

Mohamed Chamchati, general secretary of the Moroccan merchant seafarers’ union, has been released after June 2012 detention. Like his colleague Said Elhairech, who was freed in October, Chamchati had been arrested in June on clearly mistaken charges linked to the cessation of operations of the Comarit-Comanav company. Yesterday he and others were released without charge. Welcoming the release ITF general secretary David Cockroft stated: “We are gratified to see that the judicial…

ITF applaud release of Mohamed Chamchati, general secretary of the Moroccan merchant seafarers’ union. Like his colleague Said Elhairech, who was freed in October, Chamchati had been arrested in June on clearly mistaken charges linked to the cessation of operations of the Comarit-Comanav company. Welcoming the release ITF general secretary David Cockroft stated: “We are gratified to see that the judicial authorities have finally come to their senses and realised that planning trade union action in defence of members’ jobs is no threat to the security of Morocco.