Venezuela's state-run oil company Petroleos de Venezuela has created a new unit to run its oil terminals, according to a copy of the government's official gazette seen by Reuters and a person with knowledge of the matter.The launch of the new unit, PDV Puertos S.A., comes after socialist President Nicolas Maduro last month named a new PDVSA president and oil minister to try to revive the once-prosperous OPEC nation's crude output, which has fallen to decades-lows due to years of underinvestment and mismanagement as well as U.S.

Singapore Looks to Tighten Controls in its Bunkers Supply Chain

Singapore authorities are looking to apply stricter control measures across the marine fuels sector supply chain, a spokeswoman for the government agency Enterprise Singapore said on Thursday, to boost transparency and accountability in a notoriously opaque industry.The Technical Committee for Bunkering has submitted a proposal to the national standards body, Enterprise Singapore, for a new standard on quantity, measurement and sampling requirements for transfer of bunker fuel from oil terminals to bunker tankers using mass flow metering, the spokeswoman said."This proposed standard complement

35 Seafarers Kidnapped in Gulf of Guinea in 2018 -Report

Nigerian pirates have kidnapped 35 seafarers from vessels in the Gulf of Guinea so far this year, according to security firm EOS Risk Group.Nigeria continues to be the world’s epicenter for piracy activity. From January through June 2018, EOS recorded 34 Nigerian pirate attacks on merchant and fishing vessels in the Gulf of Guinea. These attacks resulted in the kidnap of 35 seafarers for ransom and the hijacking of several vessels, EOS Risk Group disclosed in its half year review…

Monjasa expands its reach to Northern France and goes from two to three supply vessels in Northwest Europe. Providing a niche market alternative to the Amsterdam-Rotterdam-Antwerp (ARA) bunker hub has proven relevant for a growing number of customers and volumes are increasing. Steadily growing demand in the English Channel allows Monjasa to expand its services to cover Northern France as well. Monjasa is able to cover port areas from Dunkerque, Calais, Dieppe, Le Havre and all the way to Brest.

The Port of Los Angeles has prepared a Draft Environmental Impact Report (EIR) for the marine oil terminal located at Berths 167-169 in Wilmington, operated by Shell Oil Company. Shell has a long-term lease with the Port for operation of the terminal through 2023, which would be superseded by a new 30-year lease. The proposed project is needed to comply with Marine Oil Terminal Engineering and Maintenance Standards (MOTEMS) -- building standards that apply to all marine oil terminals in California.

Vopak, the world's largest independent storage tank operator, has launched a new service that allows tankers docking at its Singapore Sebarok oil terminal to refuel while simultaneously loading or discharging cargoes. "The new concurrent bunkering service is in line with Maritime and Port Authority of Singapore's directive to improve port efficiency," Vopak said in a statement on Tuesday. The service eliminates the time needed to move tankers calling at the Sebarok terminal to designated anchorages in Singapore's congested waters for refuelling, also known as bunkering.

Libya's oil production has reached 700,000 barrels per day (bpd), the National Oil Corporation (NOC) said on Wednesday, recovering from a drop earlier this month caused by fighting at two key oil ports. "We are working very hard to reach 800,000 barrels by the end of April 2017, and, God willing, we will reach 1.1 million barrels next August," NOC Chairman Mustafa Sanalla was quoted as saying in a statement. The NOC said in a separate statement it hoped to produce 55,000 bpd in the coming weeks from the Abu Attifel and Rimal fields, which are currently closed for maintenance.

A senior official at Libya's National Oil Corporation (NOC) warned on Monday of a possible declaration of force majeure at the Es Sider and Ras Lanuf oil terminals, as air strikes continued and rival forces mobilized fighters in the area. NOC board member Jadalla Alaokali said force majeure, a legal waiver for contractual obligations, would "likely" be declared if violence continued, though he gave no timeframe. Libya's eastern-based Libyan National Army (LNA) lost control of Es Sider and Ras Lanuf to a rival faction, the Benghazi Defence Brigades (BDB), 10 days ago.

France's hardline CGT union ended on Friday a strike that had paralysed traffic for 26 days at the Fos Lavera oil terminals on the Mediterranean, the country's biggest oil hub, a management official at port operator Fluxel said. "Unloading resumed at the port at 9 p.m. (1900 GMT) on Friday," the official told Reuters. More than 50 oil tankers and other vessels had been held up in the harbour near Marseille, unable to unload cargo, since CGT union members joined the nationwide rolling protest against a government labour reform on May 23.

After 5 May 2016, companies responsible for shipping commercial goods or services to Saleef, Mokha and Hodeidah ports in Yemen must obtain port clearance via the UN Verification and Inspection Mechanism (UNVIM). Yemen’s Ministry of Transport has announced that, after 5 May 2015, shipping companies or owners shipping commercial goods or services to ports not under the direct control of the Government of Yemen (the ports of Saleef, Mokha and Hodeidah and associated oil terminals) must notify and apply for an entry permit via UNVIM.

After the oil industry suffered from a severe drought in Venezuela, forest fires in Canada and rebel attacks on oil installations in Nigeria, it is now facing the consequences of a national strike in France, where members of the trade union CGT have organized strikes at the country’s refineries and blocked oil terminals and fuel depots, says the Tanker Research & Consulting department at Poten & Partners. The situation seems to be worsening as more unions join the CGT and clashes break out between protestors and the police.

The Mehr News Agency reports that the British Lloyd's Register Group has canceled one sanction against Iran’s oil industry by issuing certificates for commute of Iranian oil tankers to the ports and oil terminals of European Union. The managing director of National Iranian Tanker Company (NITC) Ali Akbar Safaei stated about the official removal of the first sanction on Iran’s oil industry in the field of marine transport of crude oil and petroleum products. “Iranian tankers will now travel under the license of British Lloyds international classification institution,”he said.

Classification society and IACS member Indian Register of Shipping has established an ‘India and Offshore Advisory Committee’ with a vision to raise the profile of its services and receive strategic advice for growth in South Asia region. The India Advisory Committee comprises of 14 senior members and representatives of the maritime fraternity of India. Formation of this committee follows the launch of UAE Advisory Committee in March this year. IRClass also plans to set up ‘Singapore Advisory Committee’ very soon, preparations for which are at an advanced stage.

HINODE Events and Services Pvt Ltd., have announced the 4th Annual Conference on Salvage and Wreck Removal in India to be held on Wednesday, July 8, 2015 at Visakhapatnam on India's East Coast. This conference is being held for the first time in Visakhapatnam, a busy Dry Bulk Port, close to offshore activity in the Bay of Bengal, the Indian Ocean and Andaman Sea. Now in its fourth year, the Conference will  review the latest developments in Marine Salvage and Wreck Removal strategies…

The largest U.S. refinery strike in 35 years could spread if talks over improved safety conditions do not resume soon, United Steelworkers union (USW) International President Leo Gerard said on Tuesday. A total of 6,550 USW members are on strike at 15 plants, including 12 refineries accounting for one-fifth of U.S. capacity. Union members work at more than 200 oil terminals, pipelines, refineries and chemical plants in the U.S. The USW has said it is seeking to retain safety provisions from previous contracts and tighten fatigue standards for workers…

Singapore, the world's biggest bunkering port, plans to end the so-called "cappucino effect" in ship fuelling through new meters designed to stop suppliers from short-changing customers, although the industry is warning of a short-term sales dip. The Maritime and Port Authority (MPA) of Singapore, which sold more than 42 million tonnes of bunker oil in 2013, will be the world's first port to mandate the use of mass flow meters for fuel oil bunkering. The meters show the actual mass of fuel delivered… 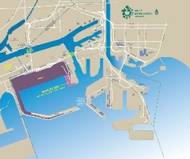 The Long Beach Board of Harbor Commissioners inks Letter of Intent to study development of a a 28-acre site on Pier T. The project is to construct a deep-water terminal for crude oil and petroleum products including gasoline, and the port has chosen Vopak Terminals North America Inc. to study the development. The preliminary agreement between the Port and Vopak sets basic deal terms and green-lights an environmental impact study of a “liquid bulk” terminal for petroleum tanker ships.

This Day in Coast Guard History – May 6

1796-Congress increased the monthly compensation of Revenue Marine officers: masters $50; first mates $35; second mates $30; third mates $25 and mariners $20. 1896-President Grover Cleveland placed the Lighthouse Service within the classified federal civil service. 1898-The cutter Morrill participated in an engagement at Havana, Cuba on 6 and 7 May 1898 during the Spanish-American War. Her officers were awarded Bronze Medals by the authority of a joint resolution of Congress that was approved on 3 March 1901.

Genoa Design International Ltd. has won a contract to provide production design and lofting for two196.8 ft Offshore Support Vessels for the Iraqi Navy. The ships, which will play a central role in rebuilding Iraq’s maritime security capability, will support and defend the country’s offshore oil terminals. Two U.S. based companies are leading the project: RiverHawk Fast Sea Frames in Florida, as primary contractor and Gulf Island Marine Fabricators, L.L.C. in Louisiana, as construction sub-contractor. The project falls under the U.S.

1953- A Coast Guard PBM seaplane crashed during takeoff after having rescued 11 survivors from a ditched U .S. Navy aircraft shot down off the coast of mainland China. A total of nine servicemen lost their lives in this crash, including five Coast Guardsmen. 1974- Coast Guard units rescued 61 crewmembers from the 551-foot tanker Keytrader and the 657-foot Norwegian freighter Baune after the two vessels collided on the night of 18 January 1974 in dense fog. 16 other crewmembers did not survive. The Keytrader was carrying 18,000 tons of fuel oil.