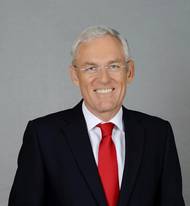 The International Chamber of Shipping (ICS) fears ‘chaos and confusion’ unless the UN International Maritime Organization (IMO) resolves some serious issues concerning the implementation of the 0.5 percent sulfur in marine fuel cap, which is scheduled to come into effect globally on January 1, 2020.Such chaos would have serious consequences for the movement of the world’s energy, raw materials and manufactured products – about 90 percent of global trade being carried by sea, ICS…

McQuilling Services’ 2016 Mid-Year Tanker Market Outlook Update examines the tanker shipping market from January, and forecasts the balance of 2016 through 2020 based on market conditions in the first half of the year. Findings from the report can be found below. Global oil demand in 2016 is expected to rise by 1.38 million b/d to over 95 million b/d, representing a 1.46 percent increase year-on-year, before decelerating in the balance of our five year outlook. Looking ahead, we expect global supply of crude oil to reach 78 million b/d in 2016 and over 80 million b/d by the year 2021.

The International Chamber of Shipping (ICS) has made a number of submissions to a critical meeting of the IMO Marine Environment Committee (MEPC) which begins in London next week (18-22 April). These address further measures to reduce the sector’s CO2 emissions, outstanding problems with the implementation of the IMO Ballast Water Management Convention, and the need for an immediate IMO decision on whether or not ships will have to use 0.5% sulphur fuel in 2020. ICS says its immediate…

Genoil Inc. (GNOLF), the publicly traded clean technology engineering company for the petroleum industries, today announced the appointment of BLUE Communications Ltd, a leading communications and business consultancy specializing in the marine, energy and environment sectors. BLUE will support Genoil’s management team in effectively positioning Genoil within the shipping industry, and helping the company to unlock the significant potential for its proprietary  technology,  the Hydroconversion Upgrader (GHU), which converts heavy crude oils and refinery bottoms into clean burning fuels.

The Impact of Lower Oil Price on LNG Vessels

Opec study on the impact of lower oil price assumptions on the penetration of LNG vessels has released. In light of the regulations on sulphur emissions issued by the IMO the prospect of using LNG as an alternative bunker fuel was explored. It was concluded that LNG had the potential to become an important marine bunker fuel in the long-term. This year the subject is re-considered in light of recent market and price developments, as well as the continuing uncertainty surrounding the implementation of new IMO regulations. 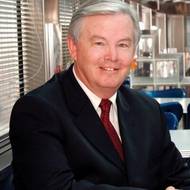 Senator John McCain said a more than 90-year-old law that requires ships servicing coastal businesses to be built and mostly staffed by U.S. crews will be repealed sooner or later if lawmakers keep fighting the trade restriction. Oil refiners, and many manufacturers and state governments oppose the Jones Act, saying the requirement increases costs by blocking shipping by cheaper foreign-built and foreign-flagged vessels. The Department of Homeland Security issued a rare waiver of the act in 2012 when superstorm Sandy led to fuel shortages at gas stations on the East Coast… 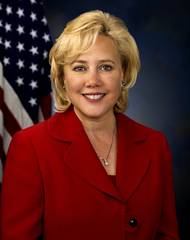 The United States should strengthen a century-old law designed to protect the domestic shipping industry, rather than relax it under pressure from the energy industry, the chair of the Senate Energy Committee said on Tuesday. The 1920 Jones Act restricts the delivery of goods between U.S. ports to ships made in the United States and flying the country's flags. Mary Landrieu, a Louisiana Democrat, said defending the law is one of her top priorities and cautioned the Obama administration not to relax the statute. 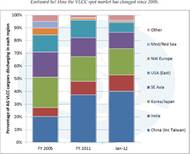 The Changing Face of the VLCC Market

With so much discussion of the poor freight rates available to VLCC owners hiring their ships out for voyages from the Middle East to major consumers east and west, it is informative to see how much the spot market for VLCCs has changed in just a few years. Since 2005, there has been a 25% reduction in reported AG/West spot VLCC voyages from 291 in 2005 to 216 in 2011. Just 11 AG/West fixtures were recorded in January 2012; if annualised the total would be 180, only 62% of the number recorded in just seven years earlier.