The first shipment of a ‘core kit’ for Russia’s Yamal LNG project has set sail for northern Russia from the Chinese port of Qingdao. China's first batch of two air cooled condensing modules of LNG project are the biggest and heaviest kits being used for the project. They are set to arrive at the construction site in late June, says China Central Television. Yamal is a liquefied natural gas project located deep in the Russian Arctic. It is expected to start operating next year. 85 percent of the liquefied natural gas will be transported to the Asia Pacific market.

Monaco – March 31, 2016 –Dynagas LNG Partners LP. * Gazprom Global LNG Limited has extended its current charter for the 2007-built LNG carrier Ob River, on the same terms, until May 1, 2018 (plus or minus 15 days). In addition, the Partnership has entered into a new long-term time charter agreement with Gazprom Marketing and Trading Pte. Ltd., an affiliate of Gazprom, for the Ob River, which is expected to commence immediately following the vessel’s redelivery from its current charter with Gazprom, for a period of 10 years (plus or minus 15 days).

Five new Arc 7 design ice-class LNG carriers being built at the Daewoo Shipbuilding and Marine Engineering (DSME) yard in South Korea will be powered by a total of 30 Wärtsilä 50DF dual-fuel engines. The vessels will operate in arctic conditions to serve the Yamal LNG project in Northern Russia. The order was placed in January with Wärtsilä's joint venture company, Wärtsilä Hyundai Engine Co. (WHEC) who will also build the engines in South Korea. Each of the LNG carriers will be fitted with four 12-cylinder Wärtsilä 50DF engines and two 9-cylinder Wärtsilä 50DF engines.

ABS, a provider of global maritime classification services, today released its Navigating the Northern Sea Route Advisory to support shipowners and operators intending to transit the increasingly popular commercial shipping routes through the Arctic seas. The comprehensive advisory, which was developed with assistance from Russia's Central Marine Research and Design Institute, provides owners with the information they need to apply for permits and to identify the possible technical… 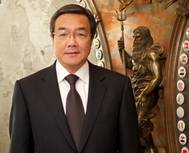 IMO Secretary-General Koji Sekimizu departs later this week (Thursday, August 15) on a five-day Arctic sea voyage as part of a fact-finding mission to the region. Mr. Sekimizu will be the guest of the government of the Russia aboard the nuclear-powered icebreaker 50 Let Pobedy as she voyages on the Northern Sea Route that links Europe and northern Russia. Mr. Sekimizu will commence his voyage from the port of Dikson, in the Kara Sea, before undertaking a 1,680 nm trip to Pevek, in the East Siberian Sea.

United Shipbuilding Corporation may build four Arctic class LNG carriers for the Pechora LNG project in northern Russia. Developers of the project, Alltech's President Dmitry Bosov informed that preliminary agreements had been signed with Russia's United Shipbuilding Corporation for four ships with a deadweight tonnage of about 170,000 mt each, report Ria Novosti. The Pechora project includes development of the Kumzhinskoye and Korovinskoye fields in the Nenets Autonomous District, with construction of an LNG production plant, a gas treatment plant, and logistics infrastructure.