The bulk carrier Anastasia, stuck off the coast of China with crew change request unheeded since mid-2020, has become a rallying point for MSC in urging governments to work together to find a solution.MSC Mediterranean Shipping Company is calling for an urgent crew change solution for the bulk carrier Anastasia, which is stuck off the coast of northern China, and is among dozens of ships in a waiting line near the port of Caofeidian.According to the company, MSC has repeatedly requested that the seafarers onboard should be relieved to return home to their families.

Some coal imported into China had failed to meet environmental standards, a foreign ministry spokesman said on Wednesday in response to reports of dozens of shipments of Australian coal stalled in Chinese ports."In recent years Chinese customs have conducted risk monitoring assessments on the safety and quality of imported coal, and we found that many coal imports have failed to meet environmental standards," foreign ministry spokesman Zhao Lijian said when asked about the Australian…

China’s iron ore imports slipped 1.7% in October from a month earlier, but still hovered well above 100 million tonnes, official customs data showed on Saturday, propped up by firm demand at Chinese mills and shipments from major miners.The world’s top iron ore consumer imported 106.74 million tonnes of the steelmaking ingredient in October, 14.9% more than in October 2019, but still below the 108.55 million tonnes brought in during September, according to data from the General Administration of Customs.For the first 10 months of 2020…

China's coal imports dropped sharply in August from the month before, customs data showed on Friday, after cooler weather crimped demand from utilities and as a typhoon disrupted supply.Total arrivals last month fell 12 percent from August to the lowest since May at 25.14 million tonnes, data from the General Administration of Customs showed.

China's Ministry of Transport said on Friday it is soliciting feedback from oil companies, shipowners' and port associations, and marine authorities for a plan to use liquefied natural gas (LNG) as a marine bunker fuel.China will expedite the planning and siting of key berths for LNG tankers in the Bohai Bay area of northern China, as well as along its main rivers, the ministry said.The ministry has asked companies and agencies to give feedback by Aug.

A vessel carrying 164,000 tonnes of coal from the United States reached Caofeidian port in northern China on Tuesday, Thomson Reuters Eikon ship tracking data showed. The vessel named Partnership is on schedule, while Beijing plans to impose steep tariffs next month on a list of U.S. At least three U.S. The other two vessels, Navios Taurus and West Trader, are expected to arrive at Jingtang port on July 18 and Aug. 10 respectively, according to Eikon data.

CNOOC will start building six liquefied natural gas (LNG) storage tanks by the end of the year as part of a project to expand its Tianjin LNG terminal to help meet surging demand from households in northern China, CNOOC Gas and Power Group said in statement on Wednesday night.The project, including six tanks each with 220,000 cubic meters of storage capacity, 12 gasification units and 12 high pressure pumps, has been approved by CNOOC's board members, the company said.The new facilities are expected to start operating in 2022.CNOOC's Tianjin terminal is expected to have 7.25 million tonnes of

Kalmar Delivers Forklifts to Port of Dalian in China

Maersk Line takes further steps towards simplifying the supply chains of its customers by expanding the service scope on its online platform ship.maerskline.com to cover more major trades and addressing customers'pain points. The new scope on the platform will cover customers exporting from ports of Shanghai and Ningbo in Eastern China and Qingdao in North China, to all Mediterranean destinations; expanding from the current three Northern China ports (Qingdao, Xingang and Dalian) to West Africa, South Africa and East Coast South America. 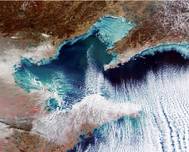 Following the success of the Day One products introduced earlier this year, Orient Overseas Container Line Limited (OOCL) announced the forthcoming launch of the second phase of the OCEAN Alliance products in April 2018, an improved suite of products providing industry-leading services to customers. The emphasis on quality services has long been the hallmark of the OOCL brand. Since the inauguration of our services in April 2017, OOCL has made steady progress to meet the requirements of our customers as they find that we are among the top performers in terms of schedule reliability.

INTTRA, a neutral electronic transaction platform, software and information provider at the center of the ocean shipping industry, and Ningbo International Logistics has announced that the two companies are expanding their longstanding partnership to include INTTRA's eVGM solutions in China. Ningbo International Logistics Development Company (NILD), one of China's top IT logistics companies, has provided booking and shipping instructions as an INTTRA partner since 2008. With the announcement…

Asian LNG spot prices jumped this week on strong demand from core importing countries including China and Japan. Spot prices <LNG-AS> for February delivery leapt 70 cents to $11.20 per million British thermal units (mmBtu). Malaysia's Petronas sold a January cargo to Japanese trading giant JERA an estimated $11 per mmBtu, trade sources said. JERA is contracted to take 5.2 million tonnes per year of LNG from Chevron's Wheatstone export project which has been offline for the past four weeks as part of the plant's complex start up procedure.

China's state-owned energy company CNOOC diverted two cargoes of imported liquefied natural gas (LNG) after a pipeline fire in northern China's Tianjin, though imports were normal as of Monday, traders with knowledge of the matter said on Tuesday. Reuters reported on Dec. 28 that a natural gas pipeline in Tianjin was closed after it ruptured and caught fire. Two sources with knowledge of CNOOC's gas operations in Tianjin said CNOOC diverted the LNG cargoes after the accident on the pipeline, which is connected to a domestic gas consumer.

The port of Antwerp is to collaborate with Dalian Maritime University (DMU) in northern China for the next three academic years. DMU is a prestigious Chinese maritime university whose alumni include many prominent figures in the shipping industry. In order to permit students to gain experience in the port of Antwerp, the second-largest port of Europe, since 2014 Antwerp Port Authority has presented awards to students who write a thesis about the port or a logistics-related subject.

Leaders from Qingdao Port Group met with APM Terminals executives in The Hague to sign a Memorandum of Understanding (MOU) for the APM Terminals Vado, Italy port project. Terms and investment amount were not disclosed. The MOU will create a new joint venture to invest in and work with other potential partners. APM Terminals Vado is a new terminal in northern Italy, which when opened in January 2018 will handle both containerized and liquid bulk cargoes – and integrated operationally with the existing 275…

Chiness president Xi Jinping promised a “thorough investigation” after huge explosions in the world’s 10th largest port- Tianjin - killing at least 50 people and disrupting operations. The Chinese government faces pressure to reveal the mystery chemical or explosives. The cause for the blasts is being investigated by China while top foreign and local companies are assessing the damages caused to them. A team of 217 nuclear and biochemical materials specialists from the Chinese military began work at the site on Thursday, the official Xinhua news agency said.

A new BIMCO clause provides a simple, practical and commercial solution focusing on the basic obligations and responsibilities of owners and charterers when dealing with the Asian Gypsy Moth (AGM). The spread by ships of AGM poses a severe risk to agricultural resources in many parts of the world. Strict regulations are imposed by authorities in countries such as the United States, Canada, Australia and New Zealand to guard against this invasive and destruction pest. The moths don't cause damage to foliage directly as they do not eat during this short phase of their life…

Katherine Wang, who is well known in Asian P&I circles, has joined the American Club as assistant vice president and marketing manager for Greater China and Northern Asia. In the first instance she will be stationed in the Hong Kong office of the club's managers, Shipowners Claims Bureau, and thereafter will be deployed to Dalian in Northern China - where in fact she graduated from Dalian Maritime University, obtaining her Bachelor’s Degree in International Shipping Transportation. Ms Wang joins SCB from another international group P&I club, where she was employed as an underwriter.

ABS announced it has been chosen to class the world's first compressed natural gas (CNG) carrier ordered by Pelayaran Bahtera Adhiguna, a subsidiary of Indonesia's state-owned power company Perusahaan Listrik Negara (PT PLN). The award for the precedent-setting ship, to be built at Qingdao Wuchuan Heavy Industry's shipyard in northern China, is the latest example of ABS' leadership in the gas ship sector, where the largest share of LNG ships is presently being built to its classification standards.