The Shipowners' Club has revelead details about Mayflower Autonomous Ship project (MAS), which is an innovative new venture to design, build and sail the world’s first fully autonomous vessel across the Atlantic Ocean. The project’s name commemorates the anniversary of the Pilgrim Father’s voyage from Plymouth, UK to Plymouth in the New World (USA) on the original Mayflower in 1620. To mark the anniversary, marine tech company MSubs, Plymouth University and charitable research foundation Promare, are developing a 21-metre autonomous vessel based on a classic Oyster hull.

Egypt headquartered Maridive Group, an international offshore marine and oil support services provider, has chosen to migrate 24 of its Offshore Support Vessels to Marlink’s VSAT (Very Small Aperture Terminal) WaveCall Plus services in addition to one new build vessel. Maridive Group has a globally distributed fleet with an operational footprint covering North & West Africa, the Mediterranean, the Caspian Sea and Latin American countries. The company selected Marlink to upgrade its vessels to VSAT in 2012…

Industry leading online chart service Fugawi X-Traverse, announced today that in coordination with GPSNavXTM and its app, iNavX, the availability of quilted raster charts for the navigation app’s most recent version. One of the most established marine navigation apps on the Apple iOS platform, iNavX brings the latest marine navigation features to iPhone and iPad users. In an exciting revision of the top-selling app, iNavX adds greater functionality to its already robust feature set.

A look at commercial off-the-shelf technologies and products designed to mitigate risk at sea and in port. In a post 9/11 world, many facets of maritime security only seem to grow. Global threats, despite best efforts, do not diminish. Chief among these issues are port security, the protection of critical energy assets and the scourge of piracy on the high seas. As the cost of meeting both challenges climbs, ship operators and port executives look to economically manage their risk. The effort weighs heavily on the bottom line at a time when many maritime sectors are struggling in the red. 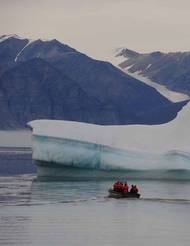 Inspired by more than 20 years of ECDIS experience and user feedback from officers all around the world, SevenCs says it is presenting “The Best of Two Worlds” – The Electronic Chart Table. Utilizing a touch screen varying from 46 to 75 inches, the crew on board can finally use an overview chart just as if it were the paper equivalent. Easy to use software, based on an ECDIS Kernel, allows detailed and compliant presentation of S-57 ENCs. The software was specifically designed for touch screen operation and has successfully been tested by navigators, captains and pilots worldwide. 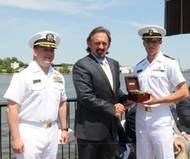 Northrop Grumman Corporation recently donated $3 million worth of training software to the U.S. Naval Academy, and also presented the Elmer A. Sperry Junior Navigator of the Year Award to Midshipman First Class Tyler Ledoux. The company donated 100 licenses of its Voyage Management System (VMS) software to the U. S. Naval Academy Foundation for midshipmen training use at the Naval Academy. The VMS software incorporates the Electronic Chart Display and Information System-Navy (ECDIS-N) which was selected by the navigator of the Navy and is now a fleet standard.

CEACT/SevenC's digital chart software displays latest USACE additional rock pinnacles data in the Upper Mississippi. Due to the historical lowest water level USACE has issued additional rock pinnacles data for different water levels in order to continue shipping on the Upper Mississippi, allowing river pilots to navigate safely through dangerous zones. The ‘danger zones’ are presented in red color highlights without cluttering or hiding information on the charts. Since it was launched ten years ago…

Nobeltec is pleased to announce a new partnership with Taylor Marine of Australia. As of October 1, 2011, Taylor Marine, also known as JN Taylor & Co. Ltd., will act as Nobeltec’s exclusive distributor of all Nobeltec products sold to dealers and end users in Australia. “It is with great enthusiasm that Nobeltec and JN Taylor enter into this partnership,” Nobeltec General Manager Bill Washburn said. Taylor Marine will provide Australian customers and Nobeltec dealers with strong, local technical support for Nobeltec PC-based navigation software including TimeZero Trident, Admiral and VNS. 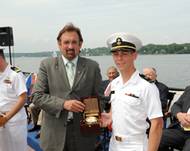 Northrop Grumman Corporation’s (NYSE: NOC) Sperry Marine business unit has been awarded contracts to upgrade the navigation systems on three U.S. Navy Cyclone-class patrol craft. The bridge upgrade program for the patrol craft is being performed under two cost-plus-fixed-fee contracts from the Naval Ship Systems Engineering Station, Philadelphia, and the Space and Naval Warfare Systems Center Atlantic. Northrop Grumman will equip each of the vessels with an integrated bridge system running under the fleet-standard Voyage Management System (VMS) software.