Twenty weeks since walking through the gates of HMAS Creswell to start initial training, 104 naval officers graduated today. Friends and family were on hand to share in the achievements of the 82 men and 22 women. Honouring a long-standing commitment to the New Entry Officers, the Chief of the Defence Force, Air Chief Marshal Mark Binskin, AC, reviewed the parade, hosted by Chief of Navy, Vice Admiral Tim Barrett, AO, CSC, RAN. “While we celebrate the achievements of the officers on parade today…

A commercial diver has pleaded guilty at Southampton Crown Court to a fraud offence in excess of £46,000 following a two year investigation by the U.K. Maritime & Coastguard Agency (MCA). The diver, Vincent Woolsgrove of Ramsgate, Kent, reported finding five cannons during the summer 2007, two from the wreck of the warship, London, and three in international waters off the coast of Kent. The cannons recovered from the warship were both very rare bronze Peter Gill and commonwealth cannons.

One of the world's oldest commissioned warships has entered dry dock for a planned multiyear restoration, the U.S. Navy reports. On May 19, USS Constitution eased into Dry Dock 1 at Charlestown Navy Yard Boston National Historical Park with the help and coordination of a large team of stakeholders including the ship's crew, Portsmouth Naval Shipyard, Naval History and Heritage Command's Maintenance Detachment Boston, USS Constitution Museum and the National Park Service. "We couldn't…

Naval Sea Systems Command (NAVSEA) headquarters officially opened its recently redesigned, renovated and renamed building with a ceremony April 20 at the Washington Navy Yard. With a nod to NAVSEA's mission, Building 197 will be known as the Humphreys Building, named in honor of Joshua Humphreys, the original designer of the U.S. Navy's first six frigates. "As America's first warship designer, he laid the foundation upon which the Navy and NAVSEA is built ... As the designer, builder maintainer… 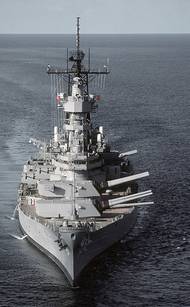 Inspectors from the Navy's Board of Inspection & Survey (INSURV) conduct a survey aboard the floating museum ship. After a storied history beginning in World War II, the battleship received its last official INSURV inspection in 1992, before becoming a floating museum on the James River. John Elliker, Battleship Wisconsin project manager, said the city of Norfolk initially contacted INSURV to ask them about surveying the ship. The conversation progressed into the INSURV team volunteering…

This Day in Naval History - July 13

This Day in Naval History - July 03

This Day in Naval History - July 02

This Day in Naval History - June 20

This Day in Naval History - June 19

This Day in Naval History - June 12

From the Navy News Service:   1944 - Four U.S. Carrier Groups (15 carriers) begin attack on Japanese positions in the Marianas. 1948 - The Women's Armed Forces Integration Act provides for enlistment and appointment of women in the Naval Reserve. 1970 - After earthquake in Peru, USS Guam (LPH 9) begins 11 days of relief flights to transport medical teams and supplies, as well as rescue victims.   For more information on naval history, visit the Naval Historical Center Web site at www.history.navy.mil.

This Day in Naval History - June 11

This Day in Naval History - June 05

This Day in Naval History - May 25

This Day in Naval History - May 23

This Day in Naval History - May 22

This Day in Naval History - April 30

From the Navy News Service:   1798 - Congress establishes Department of the Navy. 1975 - Saigon falls to North Vietnamese forces.   For more information about naval history, go to www.history.navy.mil

This Day in Naval History - April 23

This Day in Naval History - April 18

1848 - A Navy expedition to explore the Dead Sea and the River Jordan, commanded by Lt. William F. Lynch, reaches the Dead Sea. 1906 - The Navy assists in relief operations during the San Francisco earthquake and fire. 1942 - USS Hornet (CV 8) launches Doolittle's Army bombers for the first attack on Japan. 1988 - Navy destroys two Iranian drilling platforms and a frigate in retaliation for attack on USS Samuel B. Roberts (FFG 58). For more information about naval history, visit the Naval historical Center Web site at http://www.history.navy.mil.