ADNOC Logistics & Services (ADNOC L&S), a wholly-owned subsidiary of UAE's ADNOC, has signed an agreement with Japan's Inpex Corp to collaborate on LNG bunkering activities.Under the agreement, ADNOC L&S and Inpex will explore opportunities for LNG bunkering in the UAE as well as the potential to jointly expand LNG bunkering activities to cover other regions, including Southeast Asia, said a press release from the Abu Dhabi-based integrated shipping and logistics company.The use…

India, the world’s fourth-largest buyer of liquefied natural gas (LNG), has announced plans to halve its basic customs duty on imports of the chilled fuel. Indian Finance Minister Arun Jaitley presenting the Budget for 2017-18 in Parliament halved the import duty on LNG to 2.5 per cent, a move that will help cut cost of power and fertiliser production. "Considering the wide range of use of LNG as fuel as well as feed stock for petro-chemicals sector, I propose to reduce the basic customs duty on LNG from 5 per cent to 2.5 per cent," he said.

Despite some recent turbulence, the global business environment for liquefied natural gas (LNG) remains strong, and a continuous growth in demand is expected for years to come, said Khalid Sultan R Al Kuwari, Chief Marketing and Shipping Officer of RasGas Company Limited. Speaking at the CWC 16th World LNG Summit in Rome Al Kuwari said that a growth rate of approximately 5% per year from 2015 to 2025 is anticipated. During this period, LNG demand is expected to outpace the overall growth in natural gas demand, he explained.

According to the latest research from the US Energy Information Administration (EIA), floating LNG (FLNG) regasification is being used to meet rising natural gas demand in smaller markets. Floating regasification is a flexible, cost-effective way to receive and process shipments of LNG. It is increasingly being used to meet natural gas demand in smaller markets, or as a temporary solution until onshore regasification facilities are built. Of four countries planning to begin importing LNG in 2015…

An EPC contract for a production unit can easily exceed $1 billion – and $3 billion for an FPSO has recently been breached. Overall, this is a $20 to $30 billion annual market. But, as described below, the sector is hitting some headwinds that could impact future business opportunities. 243 floating production projects are in various stages of planning as of beginning May. Of these, 57% involve an FPSO, 16% another type oil/gas production floater, 23% liquefaction or regasification floater and 5% storage/offloading floater.

President Vladimir Putin warned on Thursday that Russian gas supplies to Europe could be disrupted if Moscow cuts the flow to Ukraine over unpaid bills, drawing a U.S. accusation that it is using energy "as a tool of coercion". In a letter to the leaders of 18 European countries, Putin made clear that his patience would run out over Kiev's $2.2 billion gas debt to Russia unless a solution could be brokered urgently. Russia has nearly doubled the gas price it charges Ukraine, whose economy is in crisis, since pro-Moscow President Viktor Yanukovich was overthrown two months ago.

Shell Gas & Power Developments B.V. (Shell) & the Technip Samsung Consortium (TSC) agree on FNLG development & operation. The companies have signed a heads of agreement to enhance collaboration on the design, engineering, procurement, construction and installation of future innovative FLNG facilities. The agreement builds on the existing relationship, formed in 2009, to ensure the parties can capitalize on insights gleaned from the design and construction of Shell’s Prelude FLNG facility and expand the technology offering to the energy market.

Hyundai Heavy Industries, the world’s biggest shipbuilder and offshore facilities contractor announced today that the Company completed developing its own Hyundai FLNG (Floating Liquefied Natural Gas Plant) model in association with Linde AG, an international industrial gases and engineering company of Germany. The Hyundai FLNG has an annual production capacity of 2.5 million tons of LNG and can store about 193,800 m3 LNG with its compact size of 355 m in length, 70 m width and 35 m in height. 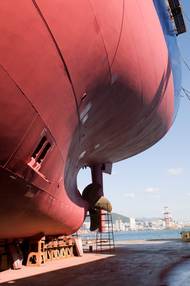 According a new forecast by MEC intelligence nearly 10,000 vessels could be adopting LNG propulsion by 2020 triggering a huge growth in the market. A ground breaking report published by the maritime cleantech market insight firm MEC Intelligence estimates more than 5% of the world fleet will adopt LNG propulsion by 2020 a huge growth considering less than 100 vessels presently. Strict environment regulations requiring the reduction of SOx, NOx to 0.1% in ECA zone in 2015 and 0.5%…

The introduction of new emissions control areas (ECA) off the coastal waters of the US and Canada promise great changes for shipping in the region. regulations coloured many of the topics discussed at the North American Committee of Germanischer Lloyd (GL), which met at the Hotel Delta in Quebec City this week. The Committee examined such topics as GL's activities, both globally and in the Americas, ship efficiency, the rising importance of natural gas for the maritime industry, the technical challenges facing shipping in reducing emissions and upcoming regulations.