The state-run China Daily says that India's plans to conduct oil exploration off Vietnam coast in the South China Sea is "illegal and is an "unwise move" that may "sabotage" positive momentum in ties. "India's intention to once again explore for oil in the disputed waters of the South China Sea is an unwise move, as it will further complicate the maritime disputes and do a disservice to maintaining the positive momentum that has been achieved in China-India ties," the China Daily said in an editorial.

The Oil & Natural Gas Corporation (ONGC) Board is expected to take up a proposal to place orders with the Netherland's IHC Offshore & Marine BV for a well stimulation vessel for about $244 million against the company's budget estimate of $150 million. The reservations over the contract stem from the fact that IHC Offshore & Marine was the only bidder that was technically qualified and it quoted a price of $254 million for the vessel, or nearly 70% higher than ONGC's estimate, reports 'The Times of India'.

Technip, in a consortium with Afcons and TH Heavy Engineering, awarded offshore India contract. The contract, worth in total about 50-million Euros, awarded by Oil & Natural Gas Corporation Ltd (ONGC), is for the Heera Redevelopment (HRD) process platform project in the Arabian Sea, approximately 70 km South-West of Mumbai, India. Installation of a new bridge connecting the existing HRC process platform, the strengthening of the existing bridge and the modification on an existing HRC process platform to ensure interconnections between all the process lines and the utilities.

Wärtsilä, ship power system integrator, has signed a ship design contract with Pipavav Shipyard of India. The contract calls for a total of 12 Offshore Supply Vessels (OSVs) to be designed by Wärtsilä and built by Pipavav, for delivery to ONGC - Oil and Natural Gas Corporation Ltd, which is the largest oil and gas producer in India. The yard is scheduled to begin production of the first seven vessels in the first quarter of 2010. Wärtsilä's strong track record in producing consistently… 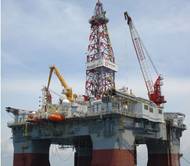