Indian government has green-lighted a mega container port, to be constructed at a cost of INR655.45bn ($9.2bn) at Vadhavan, around 160 km north-west of Mumbai.The proposal to create the huge port – on a ‘landlord model’ – was cleared at a Union Cabinet meeting chaired by Prime Minister Narendra Modi.The proposed port is set to catapult India among countries boasting the top 10 container ports in the world. At the moment, the largest container port in India is Jawaharlal Nehru Port Trust (JNPT)… 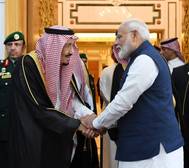 India and Saudi Arabia have decided to expand its ‘energy relationship’ into next phase to include Saudi partnership in building additional crude oil storage reserves in India, a new refinery on the west coast of India and investment in retail sector in petroleum.Saudi Arabia is its second-biggest supplier of crude oil after Iraq. It sold 40.33 million tonnes of crude oil to India in 2018-19 fiscal, when the country had imported 207.3 million tonnes of oil.India imports around 18 per cent of its crude oil from the Kingdom…

India to Use Bangladeshi Ports

India can now use two crucial Bangladesh ports - Chattogram and Mongla - for shipment of its cargo, which will cut time and cost significantly, India's shipping minister Mansukh Lal Mandavia said.He has said that Indian Prime Minister Narendra Modi’s foreign policy initiative regarding use of Chattogram and Mongla Ports in Bangladesh for movement of goods to and from India will bring revolutionary cost-cutting in shipments to and from the North Eastern States.During the official visit of  Sheikh Hasina…

The Government of India opened its second multi-modal terminal (MMT) yesterday, September 12, 2019. Located on the River Ganges at Sahibganj in Jharkhand State, the new terminal is now ready for business following the completion of a two-year construction project managed by the Inland Waterways Authority of India (IWAI). India’s Prime Minister Narendra Modi laid the foundation stone for the $40.32 million project in April 2017.Phase one of the terminal was inaugurated by Prime Minister Modi via a two-way digital communication system during an event held in Ranchi…

Indian Minister of State for Shipping, Mansukh Mandaviya laid the foundation stone for development of an additional Liquid Cargo Jetty at Jawaharlal Nehru Port Trust (JNPT) in Mumbai.According to a government announcement, the facility will be built at a cost of over INR 309 crore (USD 43 million), the project will cater to the increased demand for handling liquid cargo like edible oil, LPG, molasses and other chemicals.Mandaviya said, “The Prime Minister Narendra Modi has laid focus on port-led development.

Stena Bulk  chief executive and president Erik Hanell wrote to Indian prime minister Narendra Modi to personally enter the efforts to secure the release of UK-flagged tanker ship Stena Impero and its primarily Indian crew members, who have been detained in Iran since mid-July.According to media reports, the owner of British-flagged oil tanker Stena Impero, which was seized by Iran on July 19 with 23 crew, including 18 Indians on board, has appealed to  Modi personally intervene to negotiate with Tehran.The oil tanker Stena Impero was seized by Iran while passing through the Hormuz Strait.

India's thermal coal imports could rise by about 10 percent in 2019 due to rail transport problems and other logistical bottlenecks, an executive at the country's largest coal trader Adani Enterprises said on Tuesday.Thermal coal imports rose in 2018 after two years of decline, despite moves by Prime Minister Narendra Modi’s government to cut the country's imports in a bid to reduce the trade deficit.Rajendra Singh, chief operating officer for coal trading at Adani Enterprises…

Indian Union Cabinet chaired by Prime Minister Shri Narendra Modi has approved the Memorandum of Understanding (MoU) on Maritime issues between India and Denmark.The MoU is proposed to be signed during the upcoming visit of the Denmark officials to India in January, 2019.Signing of the MoU will pave way for both countries for exploration of areas for bilateral collaboration in facilitating cross-border cooperation and investments between the maritime sectors of India and Denmark.The agreement will enable both the countries to exchange expertise…

Commercial operations began at ndia Ports Global Chabahar Free Zone (IPGCFZ), at Chabahar with the arrival of a vessel after Government of India took over the operations.A Cyprus registered bulk carrier had arrived at Chabahar with 72458 MT of corn cargo. The vessel MV MACHERAS berthed at the terminal at 0130 hrs on 30th December 2018. Thus IPGCFZ carried out its first cargo operation by discharging the imported cargo(ex Brazil) using pneumatic un-loaders.India has written a history with its engagement in Chabahar, claimed a governement release.

Patna, capital of Indian state of Bihar, will witness a new landmark in the country’s Inland Water Transport (IWT) sector with 16 TEUs of container cargo (equivalent to 16 truckloads), belonging to food majors PepsiCo India and Emami Agrotech will reach the city's Gaighat IWT Terminal from Kolkata on river Ganga next week.Inland Waterways Authority of India’s (IWAI) vessel MV RN Tagore sailed from Kolkata’s Garden Reach Jetty on December 6th. It will reach the IWT terminal at…

Indian Minister for Shipping Nitin Gadkari has said that Blue Economy is very crucial for India’s economic development. said India has a strategic location in the Indian Ocean region, and on this basis, it endorses the growth of the Blue Economy in a sustainable, inclusive and people centred manner through the framework of the Indian Ocean Rim Association (IORA).He said, India is developing its maritime infrastructure as well as its inland waterways and coastal shipping through…

India's antitrust regulator has ordered a probe into alleged anti-competitive practices by Denmark's A.P. Moller-Maersk and Dubai's DP World at the terminals they operate at the country's largest container port in Mumbai, five sources familiar with the matter told Reuters.The decision by the Competition Commission of India (CCI) to investigate follows a complaint by Singapore's PSA International Pte Ltd, which alleged that Maersk and DP World created entry barriers to hinder the…

Indian Prime Minister Narendra Modi has inaugurated the first multi-modal terminal built on the river Ganga in Varanasi (Kashi). He also received India's first container vessel that sailed from Kolkata on the newly-developed inland waterway.The event marked India’s first inland voyage by a container ship since it gained independence from Britain 70 years ago. The first consignment contained cargo belonged to food and beverage giant PepsiCo India.The 1,390km (863 miles) Ganga watercourse is one of the 111 waterways spanning 20,276km that India is reviving or planning to build.

Marking India’s first containerized movement on inland waterways, PepsiCo India became the first company to use containerized vessel movement for transporting products from its plant in Kolkata to the port in Varanasi. The first containerized vessel was received by Hon’ble Prime Minister of India, Shri Narendra Modi at the newly developed multi-modal terminal in Varanasi. Also, present on the momentous occasion was PepsiCo India’s President and CEO, Mr. Ahmed El-Sheikh.Speaking about this historic moment in the development of inland waterways, Mr.

The 12 Indian major ports run by the state will raise the wages of its more than 32,000 port and dock workers and some 105,000 pensioners by 10.6 per cent beginning January 2017, according to a five-year agreement signed on Thursday."A new wage settlement agreement has been signed for Group C & D category of Port and Dock Workers in Mumbai in the presence of Nitin Gadkari, Union Minister for Shipping," said a press statement from the government.More than 32,000 Port and Dock workers and 1…

India Trying to Make Chabahar Port in Iran Operational by 2019

Nitin Gadkari, the Union  Minister for Shipping, India said in Dushanbe, that India is trying to make Chabahar Port in Iran operational by 2019. Gadkari was addressing the Indian Community at the inauguration of the Swami Vivekananda Cultural Centre at the Indian Embassy in Dushanbe. He said the opening up of the Chabahar Port would make the CIS countries more accessible. Shri Gadkari also spoke at length about the efforts and initiatives taken by his Government in the last four years to bring qualitative change in the lives of people.

Indonesia and India pledged on Wednesday to step up defense and maritime cooperation, with plans to develop a strategic Indonesian naval port in the Indian Ocean, the leaders of the two countries said after meeting in Jakarta. Indonesian President Joko Widodo met Indian Prime Minister Narendra Modi to discuss, among other issues, developing infrastructure and an economic zone at Sabang, on the tip of Sumatra island and at the mouth of the Malacca Strait, one of the busiest shipping channels for global trade.

India imported a record 4.93 million barrels of oil per day (bpd) in January to feed its expanded refining capacity and meet rising demand, ship tracking data obtained from sources and data compiled by Thomson Reuters Oil Research & Forecasts showed. The world's third-biggest oil importer shipped in 13.6 percent more oil in January than a year earlier and about 12.5 percent more than the previous month, the data showed. Imports in January were high as state-run refiners, which operate two-third of India's nearly 5 million bpd capacity…

Solar modules worth more than $150 million are stuck at various Indian ports due to a dispute over their classification and the import tax applicable to them, sources said, which could delay Prime Minister Narendra Modi's clean energy goals. Modi has set an ambitious target of nearly tripling the country's total renewable energy capacity to 175 gigawatt (GW) by 2022, spurring global firms including Japan's SoftBank and Goldman Sachs to invest in solar projects in the country.