30+ Properties Up for Offer in the Port of Durban

Transnet National Ports Authority in the Port of Durban is offering new lease agreements for more than 30 properties and operational sites in the Port’s Ship Repair and Bayhead Precincts. The commercial sites, which will be leasable for a minimum of five years, present opportunities for new entrants who have a minimum of 51 percent Black Ownership to participate in port related activities. Port Manager for the Port of Durban, Moshe Motlohi said this exercise was part of transforming the port space and making it more inclusive for interested businesses especially new entrants.

Transnet National Ports Authority’s (TNPA) six-berth reconstruction project at the Maydon Wharf Precinct in the Port of Durban has reached another milestone with Berth 13 and 14 now deeper and safer for bigger ships calling at the port. Transnet Group Capital (TGC) – which is executing this major project on behalf of TNPA – completed work on Berth 13 and 14 within the project’s timeframe. On Friday January 13, the Port of Durban serviced Bright Sky, the first vessel to use the common-user berth 14 after reconstruction of both the berths and a handover to port’s operations.

Transnet National Port Authority women flew the flag high at the Women in Transport Awards which took place at the Durban ICC on 18 October 2016. The Women in Transport Awards is a collaborative platform co-located with the African Ports Evolution conference and exhibition, and is dedicated to recognising excellence within the rail and maritime industry in Africa. The prestigious awards ceremony was attended by a number of decision makers, business leaders and various stakeholders from the transport and maritime industry… 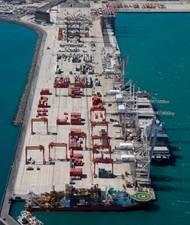 Transnet Port Terminal reports that its R5.6 billion, five-year investment plan aimed at increasing the capacity of the Cape Town Container Terminal is progressing according to schedule. Under its reconfiguration program on the long quay, the container stacking yard is being converted from a straddle carrier operation to a rubber tired gantry (RTG) operation. Over the past six months, 16 RTGs have been phased into the terminal and a further 16 RTGs are earmarked to arrive in the second half of this year.