Coast Guard crews continue to respond, Saturday, to the motor vessel Roger Blough that ran aground Friday in Whitefish Bay in Lake Superior. Throughout the night, U.S. Coast Guard boat crews conducted hourly exterior draft readings of the vessel while the crew of the Roger Blough also conducted interior soundings to the tanks each hour through the evening. Based on the stabilized draft readings and tank soundings, the flooding appears to be under control. Plans to safely remove the Roger Blough from the reef have begun. U.S.

Norwegian shipping company DSD Shipping has been fined $2.5m in a US federal court for oil dumping from an aframax. DSD has been sentenced of its convictions in Mobile, Alabama, for obstructing justice, violating the Act to Prevent Pollution from Ships (APPS), tampering with witnesses and conspiring to commit these offenses. Three crew from the 104,000-dwt Stavanger Blossom (built 2007) were also convicted and sentenced to up to six months in jail. $500,000 of the $2.5 million…

Coast Guard to Be Honored in New Orleans

The Coast Guard Foundation, a nonprofit organization committed to the education and welfare of Coast Guard members and their families, announced today the details of its Annual Tribute to the 8th Coast Guard District. To be held on Friday, March 4 in New Orleans, Coast Guard Sector Mobile will be honored at the event for their skill and leadership in organizing a mass search and rescue operation on April 25, 2015. An unforeseen storm on that day struck Mobile Bay and nearby Mississippi Sound with tropical force winds and waves…

Interactive software that can dramatically cut the time it takes to plan safe submarine missions is crossing over to the surface fleet and is being installed this month on the guided-missile cruiser USS Mobile Bay (CG 53), officials announced Dec. 16. Sponsored by the Office of Naval Research (ONR), the technology adds speed and precision the process of finding the best routes around hazards in waterways around the world. Sailors spend days or even weeks planning a successful navigation route for a mission.

On June 25, 2013, Austal held a keel-laying ceremony for the fourth Independence-variant Littoral Combat Ship (LCS) – Montgomery (LCS 8). This is the second LCS of ten awarded by the Navy to Austal, as prime contractor, and the sixth keel laying ceremony celebrated by Austal, as prime, in less than three years. During that time Austal has grown tremendously, increasing by over 2,000 total employees, and doubling the size of the facility. Mary Blackshear Sessions, the ship’s sponsor, was present to weld her initials onto the keel plate as the Keel Authenticator.

The Coast Guard took off a female passenger from the disabled ship in the Gulf of Mexico under tow to Mobile. A Coast Guard 45-foot Response Boat — Medium crew medevaced a female passenger who reportedly suffered a stroke and transported her to Dauphin Island to meet emergency medical services. The tug vessel Resolve Pioneer reported a broken tow line which was restored by the tug Roland Falgout. Meanwhile Coast Guard boarding teams assisted CBP agents with passport verification and disembarkation processing with the ship some six miles south of the entrance to Mobile Bay.

Austal USA today finds itself plowing into 2013 with the proverbial bone in its teeth, powered by an enviably hefty U.S. government backorder book, possibly the most modern and efficient manufacturing infrastructure in U.S. shipbuilding and the leadership of a new President who, over the past five years, helped to make it all happen. Nevertheless, domestic shipbuilders all know that DoD and DHS belt tightening is a the new reality. Determining the depth of government cuts and positioning accordingly is the tricky part, yet hardly new to companies operating in defense circles.

Discuss Future of Supporting the Program before Congress. Austal brought together representatives of over 50 suppliers from 25 states to build support for the future of the U.S. Navy’s LCS program. The representatives of the Independence-variant LCS industrial base gathered on May 16 and 17 for a conference and congressional outreach. Austal USA’s President and Chief Operating Officer, Joe Rella, was joined by Rear Admiral James A. Murdoch, Program Executive Officer, Littoral Combat Ships, and Congressman Jo Bonner (R-AL) in welcoming the attendees and briefing them on the U.S. 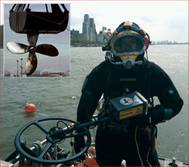 Randive, a commercial diving company based in New Jersey, is employing underwater metal detectors in their search and salvage operations. The company was founded in 1959 by Randor Erlandson, and in the early days focused primarily on the needs of the maritime industry around the ports of New York and New Jersey. In the decades since, the company has greatly expanded its operations increasing its staff to 16, and adding as its clients some of the largest shipping companies in the world.

The following is a transcript from a May 1, 3:52 p.m. EDT, press briefing by Coast Guard Commandant Thad Allen, and Assistant to the President for Homeland Security John Brennan on ongoing response to the oil spill following the Deepwater Horizon incident. ADMIRAL ALLEN:  Thank you, Denis. Good afternoon to you all. This afternoon it was announced that I would be the National Incident Commander for this continuing response. I'd like to provide some context at the outset and make a couple of comments about myself personally and some background that I have.