European ferry operator Stena Line announced that its newest ferry Stena Estrid has departed the AVIC Weihai Shipyard in north-western China, bound for its new home on the Irish Sea between Britain and Ireland.Manned by a much-reduced crew of 27, with no passengers on board, the ship will travel on a journey of well over 10,000 miles, taking just over one month and making a number of stops on the way.Stena Estrid is the first of five next generation Stena Line RoPax vessels to…

The GAC Group has opened an office in Gibraltar.Strategically located at the entrance to the Mediterranean Sea, the port of Gibraltar serves as the primary supply point for passing ships. According to the Gibraltar Port Authority, approximately 60,000 vessels transit the Strait of Gibraltar every year, with nearly 240 million gross tonnes of vessel calls in 2018 alone.

Middle East's maritime and logistics company Milaha (Qatar Navigation) will start a direct container shipping service connecting the Black Sea and the Mediterranean in its first foray into Europe.According to a press release from the Qatar-based maritime transport and logistics conglomerate the new feeder service marks Milaha’s first European service linking the Mediterranean and Black Sea. The BSX demonstrates Milaha’s commitment to deliver reliable and agile services to its customers and partners globally.The BSX rotation is Piraeus (Greece)…

The marine fuel and lubricant trading firm Glander International Bunkering has opened its  seventh office globally and third service point in Europe in Valencia, Spain, to  service clients in the Mediterranean and Spanish-speaking regions.As the new Managing Director of the Spain office, Hernan B. Ortiz has officially moved to Valencia from Dubai to assume this new important role.With more than 28 years of industry experience and 9 years within the company, Hernan will leverage… 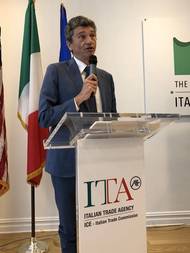 Officials from the Italian Port of La Spezia and Contship Italia were in New York City today to discuss new investment in and strategic advantages of this historic port and facilities nestled in the Northwest corner of Italy.The second largest port in Italy, the Port of La Spezia counts geographic location as its first advantage, boasting a 48-ft. depth and situated on the Mediterranean Sea, the crossroads between Europe, Africa and the Middle East. While Asia dominates trade to and from La Spezia with nearly 45% of its business…

Denmark-headquartered shipping company DFDS is offering a new connection between Sweden and Turkey following its recent acquisition of Turkish company UN Ro-Ro.Through the Sweden – Turkey intermodal connection now in effect, the carrier offers connections from Gothenburg in Sweden to Trieste in Italy, Patras in Greece and Pendik, Ambarli and Mersin in Turkey.By connecting the existing DFDS network in northern Europe with the new routes in southern Europe and the Mediterranean Sea, DFDS is capable of offering transportation of cargo from North to South and back.

Yilport Holding has submitted its offer for Taranto Container Terminal concession in Italy. Ionian Sea Port Authority (AdSP), the managing institution of Port of Taranto has officially received the request of Yilport Holding to operate the entire set of multi-purpose port facilities in the Port of Taranto. These terminals in Southern Italy handle container traffic, bulk cargo and serve ro-ro traffic. Well located as a relay hub for the Mediterranean Sea, the terminals are integrated to intermodal networks, connecting Southern Italy to Northern Italy and finally to the center of Europe.

Spain offered on Monday to take in a rescue ship that is drifting in the Mediterranean sea with 629 migrants stranded on board after Italy and Malta refused to let it dock.The Aquarius picked up the migrants from inflatable boats and rafts off the coast of Libya at the weekend, and the United Nations refugee agency said on Monday it was running out of provisions.Spain's Prime Minister Pedro Sanchez, who took office just over a week ago, has given instructions for the boat to be admitted to the eastern port of Valencia…

Danish shipping and logistics group DFDS has completed the acquisition of Turkey’s largest operator of Ro-Ro freight ships and will be a major player in the strong and continuously growing trade between the EU and Turkey. In April, DFDS signed an agreement with the owners of  U.N. Ro-Ro to acquire the shares in the company, said a press release from the company. “All relevant authorities have now approved the transaction and I am very pleased to announce that on 7 June we completed the deal. U.N.

APM Terminals Tangier welcomed the Munich Maersk, one of the world’s largest container vessels, as it made its maiden call to celebrate the 10th anniversary of the largest and most modern terminal facility in North Africa. APM Terminals Tangier is one of the most important transfer points of global trade. In addition to handling Moroccan import and export cargo, the terminal manages and transfers cargo for onward destinations in Africa, Latin America and beyond. Tangier's strategic…

CMA CGM has announced the new upgraded service offer NC LEVANT, which directly links the Eastern Mediterranean Sea (Turkey, Egypt, Lebanon) and Northern Europe (Belgium, England, Germany), via Malta, Spain and Italy. The NC Levant service will now provide extended port coverage with a new export call in Tanger Med towards the Levant Sea, and a new import call in Algeciras towards Northern Europe. Transit times offered will be among the best on the market. The upgraded service will also cover the significant ports in the region…

CMA CGM upgrades its offer between the Eastern and Western Mediterranean Sea with the new MARMARA EXPRESS line. "We are pleased to announce the new service offer MARMARA EXPRESS which directly links Turkey, Spain, France, Greece and Italy," says a company statement. This fast and reliable service will answer the recent growth of trade between Turkey and the Western Mediterranean countries. The ports of the Sea of Marmara, which are located in the North of Turkey between the Aegean and the Black Sea…

Port Bronka, the new deepwater port in St. Petersburg, was opened by mid of December 2015. Regular services started by January 2016. Meanwhile, the port offers a wide range of maritime logistics services including container- , RoRo- and general cargo handling and after little more than half a year the operational start-up phase is successfully completed. Regular container services directly connect Bronka to all main hub ports in North range ports (Hamburg, Rotterdam and Antwerp).

The Arleigh Burke-class guided-missile destroyer USS Carney (DDG 64) aided in the rescue of 97 migrants adrift in the Mediterranean Sea, July 29. Carney is forward deployed to Rota, Spain, and is conducting a routine patrol in the U.S. 6th Fleet area of operations in support of U.S. national security interests in Europe. Carney provided food and water to the migrants aboard the vessel before coordinating with a nearby merchant vessel to take them to safety. It also provided aid for the migrants until the SOS Mediterranee ship MS Aquarius arrived and took the migrants to safety.

The U.S. Navy conducted a series of cooperative air defense test exercises with the Spanish navy that culminated in live missile firing events using the latest Aegis Weapon System baseline July 20-21. The event was not only the first interoperability test of the latest Aegis Baseline 9.C1 with a foreign ship, but also the first combined Combat Systems Ship Qualification Trial with that country's navy since 2007. Guided-missile destroyer USS Arleigh Burke (DDG 51) and Spanish frigate Cristobol Colon (F 105) participated in the testing.