ABB announced Monday it has won a contract to supply the digital solution ABB Ability Marine Advisory System – OCTOPUS to Roll Group’s recently delivered vessel, BigRoll Biscay.BigRoll Biscay is the eighth vessel in Dutch heavy lift specialist’s fleet to rely on ABB marine software, which improves the safety and efficiency of ship operations by optimizing the route based on weather and forecasted vessel motions.Vessel motion monitoring and forecasting is critical for heavy lift vessels that need to move safely when in transit.

New ‘Eyes’ on the Prize

Tappan Zee Constructors ‘See’ Below Hudson River with Trimble Marine Construction Systems and Teledyne Marine Imaging.Since 1955, the Tappan Zee Bridge has been a critical thoroughfare for New Yorkers commuting between Rockland and Westchester Counties, located approximately 20 miles north of Manhattan and across the Hudson River from each other. However, a heavy increase in traffic and exponentially increasing maintenance costs ultimately lead to the decision to replace the historic bridge. The new Governor Mario M.

Supertankers entering the Port of Long Beach will use ABB’s marine software to produce real-time data of the keel-to-seabed clearance, improving the safety and efficiency of the operations. Sensors fitted to Tesoro vessels will send information to a Portable Surveyor Box (PSB), carried by the pilot, which will verify their route to the dock. In this specific case, the system is used to continuously validate (and improve) pre-calculated motions from the online decision support system PROTIDE, which is used to calculate safe transit time windows for large oil tankers to enter the port.

Lloyd’s Register (LR), a  global engineering, technical and business services organization has added to its portfolio of advanced data, digital and software solutions with the acquisition of Seasafe Marine Software & Computation (Seasafe). An unexpected incident, such as a grounding, a collision or an explosion, can result in complex technical challenges, all requiring a fast and effective response. Seasafe specializes in on-board loading and stability software to help customers manage the stability of vessels and offshore structures…

Rolls-Royce announced that its Unified Bridge Design has won this year’s Ergonomics Design Award, presented by the UK Chartered Institute of Ergonomics & Human Factors. The award recognizes industrial design which puts the customer at the heart of the process using their views to generate ideas, develop concepts and test prototypes and finished products. Rolls-Royce describes its Unified Bridge as a complete redesign of the ship bridge environment, including consoles, levers and software interfaces…

The USCG has poised e-logs and SaaS to transform U.S.-flagged shipboard recordkeeping. The United States Coast Guard frequently appears behind the times when it comes to rulemaking involving shipboard technological advances. Often, by the time the USCG has a Final Rule approved for publication in the Code of Federal Regulations, the technology which that Final Rule was expected to address has been superseded by a newer form of technology. Not so, however, with electronic recordkeeping (e-logbooks) and Software as a Service (SaaS).

SHIPPINGInsight to Focus on Ship Telematics

The directors of SHIPPINGInsight today announced that U.S. Merchant Marine Academy professor Capt. David Moskoff has agreed to be a special guest speaker at the 2015 Fleet Optimization Conference & Exhibition. The annual event takes place Oct. 13-14, at the Marriott Hotel & Spa in Stamford, Conn. A special area of focus for this year’s SHIPPINGInsight event is ship telematics, and Capt. Moskoff, an acclaimed expert on cyber security in the maritime industry, will kick-off a roundtable Oct. Capt.

SENER has commemorated the 50th anniversary of FORAN, its CAD/CAM/CAE system for designing naval vessels and marine structures, created by SENER’s cofounder José Manuel de Sendagorta in the 1960s. Today it is the world leader in marine technology and, since its inception, it has served as the prime example of SENER’s ability to innovate and export. The event was held at Madrid’s Casino on the evening of Thursday, June 11, under the auspices of SENER’s founder and Honorary President…

U.K.-based Marine Software Ltd recently supplied the Ports of Auckland with the MPMWin (Marine Planned Maintenance system) for a range of harbor towage vessels. This includes the fuel tanker vessel "Awanuia" GRT 2,747, which is owned by Seafuels, a subsidiary of Ports of Auckland/Z-Energy. The following harbour vessels will be managed and centrally controlled from the office OPM system ashore, with "Awanuia" using the on-board MPM version. Harbour towage vessels "WakaKume" & "Waipapa" are ASD Tugs with 50T bollard pull/4… 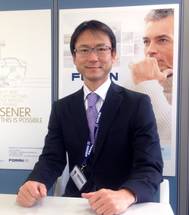 The engineering and technology group SENER has appointed Koji Kawamura as Country Manager for Japan. Koji Kawamura is a professional with wide experience in marine software and in project and business management. Kawamura assumes this position with the objective of managing SENER office in Japan, mainly focused in the marine activity, both for the number of users of the FORAN System – the CAD/CAM/CAE software developed by SENER for design and production of ships and offshore structures that celebrates its 50 year in 2015 – and for the opportunities in ship engineering projects.

U.K. based Marine Software Ltd has delivered a Marine Planned Maintenance (MPM) upgrade to 2 Tallink-Silja vessels. The upgrade has been supplied to Tallink-Silja, for installation on-board their Swedish flagged vessels "Silja Symphony" and "Galaxy". Project "Systemtillsyn" is a way for the Swedish transport agency to devolve a large portion of their survey responsibility to the crews on Swedish flagged vessels. The Swedish Transport Agency has a survey guide book (THB) which…

U.K. based Marine Software Ltd delivers Marine Project Manager (MPJ) software to P&O's cable installation ship 'European Supporter'. The MPJ vessel version will enable refit planning specifications to be compiled on board, which is then uploaded to the controlling Superintendent version for inclusion into the main refit specification. Marine Project Manager for Windows has been specifically designed to assist Superintendents and others engaged in ship repair with the monitoring and control of costs.

MarineCFO raises the bar for OMC