Dutch dredging and heavylift company Royal Boskalis Westminster N.V. (Boskalis) has received the Provisional Letter of Acceptance for the Design and Construction contract for the Pasay Reclamation Development Project in Manila Bay, Philippines in cooperation with CHEC from China.The award was made by the publicly listed company SM Prime Holdings Inc. (SMPHI), one of the largest property developers in Southeast Asia. The development will create a new commercial and residential area in a densely populated part of Manila.

Secretary of the Navy Ray Mabus hosted a ship-naming ceremony to announce that SSN 793, a Virginia-class attack submarine, will bear the name USS Oregon. During a ceremony held at the Battleship Oregon Memorial in Tom McCall Waterfront Park, Mabus announced the submarine will be named to honor the long-standing history its namesake state has had with the Navy. Mabus also recognized USS Portland (LPD 27) which he named last year in honor of Oregon’s largest city. “Sailors and Marines, like the citizens of Oregon throughout history, are pioneers.

Mitsui O.S.K. Lines, Ltd. announced that the company has completed a practice drill based on the scenario of its training ship Spirit of MOL being involved in a collision, fire, and oil spill incident just off Manila on February 18. Following is an outline of the drill, which involved about 60 participants from the Tokyo Head Office and MOL Group companies. Beginning on the afternoon of Thursday, February 18, the drill was intended to strengthen the foundation of social responsibility laid out in the MOL Group Corporate Principles protecting the environment by maintaining strict…

Secretary of the Navy Ray Mabus has approved Naval Weapons Station Seal Beach, Calif., as the commissioning location of Pre-commissioning Unit (PCU) Dewey, the Navy's newest and most technologically advanced guided-missile destroyer. The event will be the first time a U.S. Navy warship has been commissioned at Seal Beach. Deborah Mullen, wife of Adm. Mike G. Mullen, chairman of the Joint Chiefs of Staff, is the ship's sponsor. She had previously christened the ship during a ceremony at Northrop Grumman Shipbuilding in Pascagoula, Miss., Jan. 26, 2008. The new destroyer honors Adm. 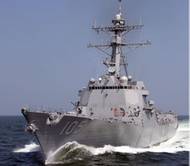 Northrop Grumman Corporation (NYSE:NOC) delivered two ships to the U.S. Navy this week at its Gulf Coast shipyards in Pascagoula, Miss. and Avondale, La. Company and Navy officials signed documents officially transferring custody of the Aegis guided missile destroyer Dewey (DDG 105) in Pascagoula on Monday, Aug. 17 and the amphibious transport dock ship New York (LPD 21) at the New Orleans facility on Friday, Aug. 21. "Delivering one ship is a tremendous accomplishment, as a ship delivery flexes nearly every muscle in a shipbuilding organization…