Danish manufacturer of wind turbines MHI Vestas Offshore Wind has opened a new office in the Port of Ostend to expand its offshore wind operations at the Belgian port.“Because we will be servicing no fewer than 244 wind turbines at sea from the Port of Oostende by 2020, we were in urgent need of expansion. This new location offers room for our new employees. Meanwhile, we now have over 100 employees in our Belgian branch,” says Aart Bark, Regional Director, MHI Vestas Belgium.MHI Vestas Offshore Wind is already an established company in the offshore wind industry at the port facility.

Handforth is New CEO of Aberdeen Harbor Board

Michelle Handforth has taken over the role of chief executive at Aberdeen Harbor Board, the U.K. offshore oil and gas port. This comes after an extensive recruitment process, when Handforth, who has 20 years of board and leadership experience in global, multi-site businesses, was recruited to succeed Colin Parker as Chief Executive. Alistair Mackenzie, Chairman of Aberdeen Harbor Board, said, “Michelle is joining Aberdeen Harbor at an incredibly important time for the organisation.

NorSea Group UK (Ltd) has completed Phase I of its multi-million dollar investment at its Shore Base within Peterhead Port with the opening of a new custom-built Marine Gas Oil (MGO) facility on Smith Quay. Two MGO tanks, which hold a combined total of 3000 cu. m.  of fuel, are now operational. This represents an expansion in the range of services currently provided directly to clients by NorSea Group at Peterhead as project support and supply vessels can now be fuelled directly at the quay.

Over 40 ships are already scheduled to put into Gotland in 2018. Activities are fully underway to equip Gotland to handle over 60,000 passengers during its first season once the cruise quay has opened. Region Gotland and CMP have been working hard to market the island for its maiden season and it has produced excellent results. ”The shipping companies seem to be very positive about Visby and Gotland as a cruise destination. The possibility of calling at Visby is making the cruise routes in the Baltic more attractive.

The expansion of the Panama Canal will take traffic through the inter-oceanic passage to a new level, which already handles around 6 percent of global trade transportation, its administrator said on Saturday. With the expansion of the canal's width and depth, the volume of traffic will double, as Panamax-class vessels will now be able to pass through, carrying up to 14,000 cargo containers. Jorge Luis Quijano, administrator of the Panama Canal, said at a press conference that this expansion…

Business owners across the U.K. wanting to drive growth in the maritime sector are being urged to engage with the newly opened Maritime Knowledge Hub in Birkenhead, Liverpool City Region. The hub, based near Cammell Laird shipyard, is celebrating the formal completion of its recent fit-out and is now planning a busy agenda of events, seminars, training and networking. The completion of Phase 1 of the Maritime Knowledge Hub is a joint venture between Mersey Maritime, Liverpool John Moores University (LJMU) and Wirral Council on behalf of the Liverpool City Region Combined Authority.

Press Release -- ALMACO’s Modernization team sailed onboard Royal Caribbean’s Quantum of the Seas and Anthem of the Seas to perform turnkey deliveries of 17 new crew cabins on deck 2. The scope of work for each of the ships involved the dismantling of the existing crew-dedicated Windjammer, the assembly of the 17 new cabins, new corridors, and the electrical and piping works in line with the physical changes. "The team faced several technical and scheduling challenges with back-to-back projects that had practically overlapping timelines," explained Tommi Virta, Project Manager.

As Świnoujście terminal which is designed to reduce Poland’s dependence on natural gas imported from Russia is at the final stage, Poland expects to receive its first cargo of liquefied natural gas (LNG), reports Reuters. The terminal, being built in the Baltic city of Swinoujscie, is Poland's flagship project to diversify its gas supplies and reduce a dependence on Russia. Gaz-System’s unit Polskie LNG, which is building the import terminal, said it had reached an agreement with Italian company Saipem, the main contractor of the scheme, which was due to be carried out last year.

LNG Terminal in Poland Will be Ready This Year

Świnoujście terminal which is designed to reduce Poland’s dependence on natural gas imported from Russia will be completed by the end of the year, Polskie LNG, a company designed to conduct the investment, informed in a press release. Poland's liquefied natural gas (LNG) import terminal in Świnoujście will receive its first cargo of the chilled gas by the end of 2015. However, the terminal on the Baltic Sea will be ready for commercial exploitation in the second quarter of 2016.

The Panama Canal Authority (ACP) expressed its satisfaction after the main contractor for the Third Set of Locks Project, Grupo Unidos por el Canal (GUPC), and the National Union of Workers of Construction and Similar Industries (SUNTRACS) reached an agreement which supersedes the strike call in the new locks’ construction site in both the Atlantic and the Pacific sides. The ACP expects this agreement marks the continuation of a harmonious relationship between both parties, and thus the completion of the work as it is scheduled, which has now reached 93 percent completion.

The Panama Canal Authority (ACP) issued a press release stating it has learned of a National Union of Workers of Construction and Similar Industries (SUNTRACS) notice to strike issued to Grupo Unidos por el Canal (GUPC), the main contractor for the Canal's third set of locks project, which is currently 93 percent complete. The ACP said it is deeply concerned about the situation and is closely following its developments as the authority’s business may be directly impacted if work is not carried out to deliver the project on time.

The Panama Canal Authority (ACP) has learned of the National Union of Workers of Construction and Similar Industries (SUNTRACS) notice to strike issued to Grupo Unidos por el Canal (GUPC). GUPC is the main contractor for the Canal's third set of locks project, which is currently 93 percent complete. The ACP has repeatedly appealed to both sides to reach an agreement on matters that, by law, only pertain to dealings between GUPC and SUNTRACS members. The ACP, although the ultimate owner of the project…

Turkey has completed upgrades on two Ay-class submarines, contractor STM, an Ankara-based defense technologies company, said. The modernization project comprising renewal of Electronic Support, Attack and Search Periscopes and Inertial Navigation Systems has been carried out by STM as the main contractor and applied successfully on TCG DOĞANAY (S-351) and TCG DOLUNAY (S-352), AY- Class submarines. The project has been started in 2011. The modernization process of TCD DOLUNAY Submarine completed successfully on April 09…

Lerwick Port Authority has awarded a construction contract for the latest expansion of the harbour’s facilities in a project costing a total of £16.5 million and which will benefit the fishing and oil sectors. The new jetty at Holmsgarth North will provide deeper berthing and more working area for the fishing fleet, while the outer arm of the L-shaped jetty will create a dock sheltering a planned new white fish market. The outer arm will also be suitable for berthing offshore industry vessels. Local company, Tulloch Developments Ltd, has been appointed main contractor.

With investment support from the Finnish Government of 185 million NOK Skangass has decided to build a new import terminal for LNG. The terminal will be completed in 2016. Skangass plans to create an efficient LNG logistics chain in the Pori area. When the terminal is ready in Autumn 2016 it will have a capacity of 30,000 cubic meters. Skangass has already selected the main contractor and suppliers for the project. ”The investment decision will result in speedy progress in the construction project. 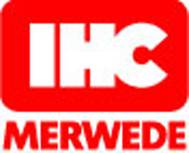 IHC Merwede and BAE Systems will enter into a cooperation agreement to meet the demands of the offshore construction vessel market in the USA. This cooperation enables IHC Merwede to enter new markets, which is in line with the company’s internationalization strategy. The partnership also allows BAE Systems to increase vessel new construction in its commercially focused shipyards. According to the agreement, IHC Merwede, as a main contractor, will be responsible for the design and build of the vessels. The Dutch company has gained a reputation as a pioneer in the offshore industry.

Wilhelmsen Ships Service has been awarded a contract to handle all the ships agency calls for the main contractor to the Belwind Project, one of the largest new green energy projects in the world. Wilhelmsen Ships Service Belgium has signed an agency agreement with Van Oord Belgie to act as full agent in the port of Zeebrugge for their port calls during the Belwind Project. The Dutch contractor Van Oord Dredging and Marine Contractors have been awarded the contract for the engineering, procurement and construction of the first part of the Belwind offshore wind farm project.

Atlas Elektronik has established a new subsidiary in Finland. With this local branch, Germany’s systems supplier for naval electronics will be able to start an intensive support to the Finnish Navy and also work more closely with Finnish partners. Atlas Elektronik Finland Oy is based in Helsinki. Its managing director is Sami Sohlberg, a former officer of the Finnish Navy. After successfully handling a number of projects in recent years, Atlas supplies the main contractor Intermarine with modern mine countermeasures systems of the type IMCMS for the Finnish Navy.

Drydocks World - Dubai, a ship repair, conversion and new building yard and the flagship company of Drydocks World, announced that work is underway on its first ever Floating Storage Re-gasification Unit (FSRU) conversion project, known as the FSRU LIVORNO Project. The conversion of the Liquefied Natural Gas (LNG) carrier, Golar Frost into an FSRU, is being handled by the Main Contractor, Saipem, a leading international turnkey contractor in the oil and gas industry and will be delivered to OLT Offshore LNG Toscana, a company operating in the Italian gas industry.

Genoa-based classification society RINA has taken a lead in the developing market for floating LNG terminals. It has been chosen to class the first offshore Floating Storage and Regasification Unit (FSRU), and is providing studies and support for a number of further offshore LNG projects, including the newbuilding which is likely to be the world’s second offshore LNG FSRU. Addressing the Mare Forum Houston conference, Massimo Volta, RINA’s General Manager America, said, “Italy leads the world in implementing offshore LNG terminals.

Jumbo has been awarded a North Sea FPSO mooring, installation and hook-up contract by EnQuest. EnQuest is redeveloping the Ardmore and Duncan fields as Alma and Galia respectively. The project scope is the mooring spread installation and FPSO tow out and hook up. This will be the first offshore project in which Jumbo will act as the main contractor and not as a subcontractor. EnQuest is redeveloping the Alma and Galia fields, located in Blocks 30/24, 30/25 and 30/29, 310km south-east of Aberdeen in the UK North Sea.