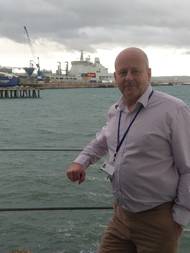 Krishnapatnam Port Company Limited (KPCL), the largest deepwater port on the east coast of India, announced that it has handled 45 Million Metric Ton (MMT) of cargo in 2017-18 (FY18) thus, achieving a 25 percent growth over 36.10 MMT handled in the previous fiscal. The company witnessed a record 88 percent rise in the number of containers it handled at 4,81,408 TEUs vis-à-vis 2,55,439 TEUs during the last fiscal. Total bulk cargo handled by the port stood at 37 MMT. Coal, Iron ore and Granite dominated the cargo portfolio handled at Krishnapatnam Port.

The Indian Government has taken steps to expand and modernise the posts in the state of Maharashtra. The Minister of State for Shipping Mansukh L Mandaviya has informed that at present, there are two major ports and 48 minor ports (non-major ports) in Maharashtra. Both the major ports in Maharashtra, Mumbai Port and Jawaharlal Nehru Port are equipped with modern facilities. The infrastructure augmentation & modernization of Major Port is a continual process. Out of the 48 minor ports…

H-Energy to Start West Coast LNG Terminal in May 2018

India's H-Energy Pvt Ltd, a unit of real estate group Hiranandani, will start operations at its liquefied natural gas (LNG) terminal in the western Maharashtra state by May 2018, its chief executive said on Wednesday. India plans to raise the share of natural gas in its energy mix to 15 percent in three years from the current 6.5 percent, according to a plan set out by Prime Minister Narendra Modi's government. H-Energy has invested 17 billion rupees ($261 million) to build its 4 million tonnes per annum (mtpa) regassification terminal near the Jaigarh port in the state…

The Indian Minister of Shipping Nitin Gadkari will perform the Bhoomi Poojan (Ground breaking ceremony) the Wardha dry port at Sindi (Railway) in Wardha, Maharashtra on 2nd October, 2017. The Dry Port is being developed by the Jawaharlal Nehru Port Trust (JNPT) in a bid to cater effective logistics services to the industries in Vidarbha region and improve cargo throughput at the Port. The proposed Wardha Dry Port is to be constructed over an area of 350 acres in phased development with a total estimated investment of Rs 500 Crore.

The National Cyber Security Coordinator Dr Gulshan Rai visited Jawaharlal Nehru Port Trust (JNPT) to assess the impact of the global cyber attack that has disrupted the operations of one of the container terminals at the port. He, together with Chief Commissioner Customs and Excise, Chairman-JNPT and Inspector General-Cyber Maharashtra held discussions with the officials of GTI Terminal, DP World and officials of JNPT. JNPT handles container traffic through four terminals. One of the Terminal(GTI) is operated by APM Moller Maersk, a Danish company with headquarter at Copenhagen.

Allcargo Logistics’ CSR arm, have signed a Memorandum of Understanding (MoU) with Maharashtra State Skill Development Society (MSSDS) to train over 7,400 youth in Maharashtra. This initiative will help Allcargo to enhance its scope of work under its skilling initiative ‘Nipun’ and would substantially contribute to the Government of Maharashtra’s Skilling Maharashtra Mission. Trainees will be primarily skilled in the fields of heavy and light commercial vehicle, warehousing and unarmed security guards. The initiative aims to provide placements to at least 70 percent of the candidates.

JSW Group will invest INR 7,000 crore (USD 1.1bln) more in the ports sector over next three years to create assets in the country as well as abroad, PTI reported. The company is also looking at diluting up to 15 percent stake in the ports operating company, JSW Infrastructure, to a private equity player soon, and take it public by 2019. JSW Infrastructure Ltd (JSWIL), a 100% subsidiary of Sajjan Jindal led-JSW Group, has  also drawn up a master plan to develop its Jaigarh Port in Konkan as one of India’s biggest ports that could receive big bulk carriers, LNG, LPG and oil tankers.

Sagarmala Programme, an ambitious port-led infrastructure development programme of the government to harness India’s 7,500-km, is now moving from the conceptualization and planning to the implementation stage. The National Perspective Plan (NPP), for the comprehensive development of India’s coastline and maritime sector, has been prepared and was released at the maiden Maritime India Summit 2016, on 14th April, 2016, by the Hon’ble Prime Minister. As part of Sagarmala, more than 400 projects, at an estimated infrastructure investment of more than Rs.

India plans to more than double its liquefied natural gas (LNG) import terminal capacity in six years to cater to the rising natgas demand from refineries, fertilizer and power plants, according to a report in the Economic Times. A total of 15.15m tonnes of LNG was delivered into Indian terminals in 2015, a 5% increase from 2014, according to ICIS data. India was one of the biggest importers of LNG in Asia buying approximately10.4 million tonnes in 2014. In 2015-16, the natural gas consumption in the country rose barely 2 per cent to 52 billion cubic meters…

The first ever Maritime India Summit in Mumbai has resulted in attracting investments worth Rs 82,905 crores ($12.5 billion), says the Ministry of Shipping. A total of 141 MoUs and Business Agreements were signed by various players in maritime sector including Major Ports, State Maritime Boards and PSUs like Shipping Corporation of India, Cochin Shipyard Limited, Inland Waterways Authority of India etc. Some of the major Indian companies who have signed agreements include the Adanis, Jindal, Vedanta, ESSAR, and Shapoorji Pallonji Company.

As part of its aggressive plans for port-led development, Union Shipping and Ports Minister Nitin Gadkari said he is looking to add eight major ports to the already existing 12, according to a report by Press Trust of India. "We are planning to add eight new major ports, including the three already announced - at Wadhwan in Maharashtra, Sagar in Bengal and Colachel in Tamil Nadu," he said. India currently has 12 major ports and three more are being developed, one each in Maharashtra, West Bengal and Tamil Nadu. The total cost of the three upcoming ports is about Rs 25,000 crore.

The board of  Jawaharlal Nehru Port Trust (JNPT), India’s biggest container port, has approved Rs 2000 crore ($301 mln) dredging operation of the channel between Bombay Port Trust  (BPT) and its own end to facilitate bigger ships docking/berthing at the port premises. Currently, the port with a draft of 14 metres (tidal) is capable of receiving ships that can carry 11,000 containers and on April 1, a ship with 13,900 containers will call on the port reflecting the greater draft capacity. The new proposal is to increase the depth to 15 meter.

Indian minister for shipping Nitin Gadkari has said port and shipping sector has potential to create nearly 4 million direct jobs and 6 million indirect employment opportunities over the next 5 years. Recalling Prime Minister Mr. Narendra Modi’s thrust on port led development, Mr Gadkari said his Ministry has drawn up projects with investment potential of Rs 1,20,000 crores, (US $ 18 billion) which will be showcased at the India Maritime Summit to be held in Mumbai from April 14 -16.

India’s biggest private port operator Adani Ports and Special Economic Zone (APSEZ)  is actively looking at acquisitions to complete its “string of pearls” ports strategy, reports Livemint. CEO Karan Adani is leading the drive, it adds. In India, Adani Port is looking to expand its presence in Maharashtra and West Bengal, according to the paper. In overseas markets, the company is scouting for opportunities in Sri Lanka, Bangladesh, the US and Europe, apart from the ports planned in Australia.

The Indian government’s has been going all out to put the growth of the Indian maritime Industry on a fast track by opening up a host of opportunities, offering goodies and putting in place new facilities. Setting the tone for his keynote address at the 9th Biennial International Conference on Ports, Shipping & Logistics organized by the Bombay Chamber of Commerce & Industry at the Taj Mahal Hotel, Mumbai, Nitin Gadkari, Union Ministry of Road Transport, Highways and Shipping…

The Ministry of Shipping has taken many proactive and progressive interventions in the areas of shipbuilding, port development, inland waterways and coastal shipping this year for the development of the maritime sector in the country. The key initiatives includes  Sagarmala Project, Special Purpose Vehicle to provide efficient last mile rail connectivity to Major Ports, Incentive for Shipbuilding and ship-repair Industry,  Jal Marg Vikas Project, Customs and Excise Duty Exempted…

The $10-billion Adani Group is stringing together a Sagar Mala or necklace of ports dotting India's coastline, said Karan Adani, reports ET. The group is keen to complete its own 'Sagarmala' (Necklace Ocean) dream by having presence in the three key states of Maharashtra, Karnataka and Andhra Pradesh, apart from setting up trans-shipment terminals in Southeast Asia and East Africa. “We are also keen to have trans-shipment terminals in Southeast Asia, especially in Myanmar and Bangladesh…

The Ministry of Shipping, along with the Directorate General of Lighthouses and Lightships (DGLL) has drawn up an ambitious programme to develop 78 lighthouses in the country as centres of tourism in the first phase under Public Private Partnership (PPP). The identified lighthouses are in Gujarat, Maharashtra, Goa, Karnataka, Kerala, Lakshadweep, Tamil Nadu, Puducherry, Andhra Pradesh, Odisha, West Bengal and Andaman and Nicobar Islands. The land adjacent to these lighthouses may have hotels…

Bharat Mumbai Container Terminals Private Limited (BMCT), a wholly-owned subsidiary of PSA Bharat Investments Pte Ltd (which is a subsidiary of PSA International) celebrated the laying of the foundation stone today to mark an important chapter in the development of the fourth container terminal in Jawaharlal Nehru Port (JN Port), India. The ceremony was graced by The Honourable Shri Narendra Modi, Prime Minister of India; Shri Nitin Jairam Gadkari, Union Minister for Shipping…

The Shipping Ministry, Government of India has named Anil Udhavrao Diggikar, a Maharashtra cadre Indian Administrative Service (IAS) officer of the 1990 batch, as the new chairman of the state-owned Jawaharlal Nehru Port Trust (JNPT). AT present Mr Diggikar is the vice chairman and managing director of the Maharashtra State Road Development Corp. Ltd. The port will be having a Chairman after a long gap as the port did not have a fulltime chairman even since N.N. Kumar demitted office in March this year.