The European Commission has approved the acquisition of Ocean Breeze Energy GmbH & Co. KG by Sage Holdings, ultimately indirectly controlled by Macquarie Group Limited.Ocean Breeze Energy is the owner of North Sea wind farm BARD Offshore 1, from Unicredit. The 400MW offshore wind farm is positioned 100 kilometres off the coast of northwestern Germany.Under the EU Merger Regulation, the proposed acquisition would raise no competition concerns as the companies are not active on the same or vertically related markets…

Iberdrola Sells Stake in East Anglia One to GIG

Spanish public multinational electric utility company Iberdrola has entered into an agreement with Green Investment Group (GIG), part of Macquarie Group, to sell a 40% share in the East Anglia One offshore wind farm.The group will continue to be the majority shareholder, with 60% of this offshore wind farm, which will be one of the largest in the world when it enters into operation.According to transaction terms and conditions the entire value of EAO amounts to £4.1 billion and when the wind farm is operational in 2020…

Australian coal rail operator Aurizon Holdings said on Monday it was in talks to buy the Wiggins Island Coal Export Terminal (WICET), which urgently needs to restructure $3 billion in debt. A purchase would mark a change in strategy under new Chief Executive Andrew Harding for Australia's largest rail freight operator, which runs nearly 2,700 kms (1,680 miles) of rail lines transporting millions of tonnes of coal a year. A successful deal would also be a relief for mining giant… 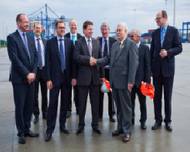 DCT Gdansk and Maersk Line have made a major step forward for the marine industry in Poland with the first regular E class vessels call to the Baltic Sea. In January 2010, Maersk and DCT started a revolution in the Baltic Sea by establishing a regular connection between the Far East and Gdansk served by 8,000 TEU vessels. With the upgrade to 15,500 TEU vessels - the largest in the world – the Baltic revolution is now in full swing. The maiden call of mv Maersk Elba gave cause for a two-day event during which many VIPs congratulated Maersk and DCT.