Brazil's Vale and China's Ningbo Zhoushan Port have signed a deal to invest around 4.3 billion yuan ($650.6 million) in iron ore storage and processing facilities in Zhejiang, a local government statement said on Friday.The move follows the two firms' inauguration of a grinding hub at the port in eastern China in August and further boosts Vale's presence in the top global consumer of the steelmaking raw material.Vale, the world's second-biggest iron ore miner, and Ningbo Zhoushan Port will each hold 50% in the joint venture (JV), whose planned creation was flagged in a filing last month.

China will beef up its Caofeidian pilot free trade zone, prioritizing the development of international commodities trade and bringing in more foreign investments, local government said on Monday.The Caofeidian district, on the edge of China's top steelmaking city of Tangshan, aims to achieve trade volume of more than 50 billion yuan ($7.07 billion) and introduce 100 foreign projects by 2022, it said in a statement on its website.The district also plans to make a commodities trading center in northeast Asia in early 2025 and to make China's northwestern provinces and Mongolia a key shipping hub

The world’s second busiest cruise port is maintaining normal operations as it continues to monitor the COVID-19 developing situation, the Canaveral Port Authority announced.The port said it will be profoundly impacted by Friday's decision by major cruise lines to voluntarily suspend operations from all U.S. ports for at leas 30 days, and that it is working with cruise line partners to coordinate efforts and help meet their operational and berthing needs. The port said it is also working with federal, state and local government agencies – like the U.S. 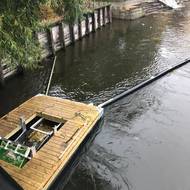 New system helping to solve garbage problems in rivers by collecting waste from water surface. SpillTech, aNorwegian company which specializes in oil spill recovery equipment and systems to collect waste in ports, is expanding its services to tackle waste pollution issues in rivers.“Many rivers are becoming increasingly polluted, so it is important to collect as much waste as possible and that is the reason why we have developed a new waste collector system,” reasoned Trond Lindheim…

Keppel Telecommunications & Transportation (Keppel T&T) has entered into agreements to divest its entire stakes in Keppel Logistics (Foshan) Co (KLF) and Keppel Logistics (Hong Kong) to Sinoway Shipping, a subsidiary of Sinotrans Limited, for about S$39 million.Expected to be completed in 2019, the proposed divestments are in line with Keppel T&T's strategy to unlock value and recycle capital, allowing the company more flexibility to pursue other opportunities.Thomas Pang, CEO of Keppel T&T…

The British Ports Association has welcomed the announcement by the UK Government that there will be a new grants scheme for infrastructure modification at UK ports should there be a ‘no-deal’ Brexit but has stated a deal was the best way to avoid potential disruption at ports.The UK’s Department for Transport is to introduce its £10 million (about $12.17 million) Port Infrastructure Resilience and Connectivity Fund for English Ports scheme in the run up to the Brexit date of October…

Huntington Ingalls Industries’ Newport News Shipbuilding division hosted a ribbon-cutting ceremony on Wednesday for a new home company volunteers built in collaboration with Habitat for Humanity Peninsula and Greater Williamsburg. The company also broke ground on its 17th joint project.Newport News joined elected officials and community leaders in welcoming Salima Kabwe and her three children to their new home in the city’s southeast community. The three-bedroom house is the 16th…

Bernhard Schulte Shipmanagement (BSM) has relocated to a new, larger Singapore office in the Republic’s Central Business District.The new premises now house Bernhard Schulte, the group’s ship owning arm, alongside with BSM, the third-party ship manager and MariApps, the Group’s digital solutions company.“BSM’s presence in Singapore has grown steadily in recent years and we believe that the new ‘Bernhard Schulte House’ will cater to the future growth and expansion of the group’s entities in Singapore…

China's Sinopec Corp has teamed with Zhejiang Energy Group Co Ltd on a 3 million tonne-per-year liquefied natural gas (LNG) terminal in east China, with the first phase set for operation at end-2021, the state oil giant said on Wednesday.The project, to be built in Wenzhou of Zhejiang province, includes four tanks each able to store 200,000 cubic meters of LNG, a berth to dock tankers of 30,000 cubic meters to 266,000 cubic meters, as well as a 26-km (16-mile) pipeline.The two…

USS SLATER is scheduled to open to the public on Wednesday, April 4th. This year will mark the ship's 21st season in Albany. There have been tremendous changes to the ship since she first arrived. USS SLATER has become one of the best restored, most historically accurate World War II ships in the world. A National Historic Landmark, USS SLATER is the only remaining World War II Destroyer Escort afloat in America. Destroyer Escorts originally were conceived to battle Nazi U-Boats while escorting convoys across the Atlantic.

The Dubai Maritime City Authority (DMCA) shared its renowned experience in implementing world-class maritime registration and licensing services with the Department of Municipal Affairs and Transport in Abu Dhabi (DMAT) during their recently held meeting. Both parties also exchanged expertise to achieve their common goals of further improving the marine licensing system according to the highest international standards and reinforcing the UAE’s position as one of the most important maritime and logistics capitals in the world.

A truly global hub and still arguably the center of Asian trade and logistics, Hong Kong nevertheless faces many challenges. … the Port of Hong Kong saw in 2016 its lowest TEU throughput for more than a decade. Not even a late surge in throughput in December could prevent the less-than-rosy results. By the numbers, Hong Kong saw a monthly 1.8 million TEU, 14 percent increase from the same period just one year ago. But, 2016’s totals (19.6 million TEU) represented an annual drop of 2.5 percent.

The National Retail Federation (NRF) called on the U.S. Maritime Alliance and the International Longshoremen’s Association to work together to avoid a one-day shutdown of East Coast and Gulf Coast ports proposed by the ILA. “Thousands of companies and millions of workers rely on these ports and any disruption to their activity even for a day could have a negative impact on the U.S. economy,” NRF Vice President for Supply Chain and Customs Policy Jon Gold said. “While the union might have concerns with certain local government actions, engaging in a coastwide shutdown is not the answer.

APM Terminals together with AIP Foundation, a road safety nonprofit, is rolling out a new training program in Vietnam to help make the port community of Cai Mep in southern Vietnam safe. More than 45 truck drivers and other CMIT employees, along with executives from the APM Terminals’ operated Cai Mep International Terminal (CMIT), joined 500 students, teachers, and parents at Tran Quoc Toan Primary School, which neighbors the port, to address road safety issues in their community. The truck drivers work for CMIT, a subsidiary of the Netherlands-based port operator APM Terminals.

The Port of London Authority (PLA) has announced two new non-executive directors have been appointed to the PLA board: Judith Armitt has been appointed by the Secretary of State for Transport (in accordance with the Port of London Act); and Darren James has been appointed by the PLA Board. Judith Armitt will bring substantial public sector, London and Thames experience to the PLA. She was most recently chief executive of Local Partnerships LLP, the joint venture between HM Treasury and the Local Government Association.

BP announced today that following significant progress in resolving outstanding claims arising from the 2010 Deepwater Horizon accident and oil spill, it can now reliably estimate all of its remaining material liabilities in connection with the incident. As a result, taking into account this estimate together with other positive tax adjustments, BP expects to take an after-tax non-operating charge of around $2.5 billion in its second quarter 2016 results. This charge is expected to include a pre-tax non-operating charge associated with the oil spill of around $5.2 billion.