The Akademi Maritim (AKMI) Suaka Bahari Cirebon has selected VSTEP for the supply of one DNV Class A FMB Simulator to train its students in accordance with the latest IMO requirements and model courses. On August 22, 2016, VSTEP and its local distributor PT Megatech Mandiri Setia have been awarded the contract from AKMI Suaka Bahari Cirebon to deliver a NAUTIS DNV Class A FMB simulator with 240° horizontal field of view and a NAUTIS Instructor Station. The signing ceremony was attended by representatives from PT Pelindo 2, the Indonesian Ministry of Education and the Indonesian Navy. 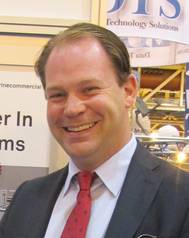 Marine equipment manufacturer Dometic Marine appointed Gustaf Hamrén to manage expanding sales for OEM and aftermarket products in Turkey. Effective from July 1 2015, Key Account Manager Hamrén is now handling the company’s OE product portfolio in the country, as well as managing sales and technical enquiries from the local distributor. Technical sales specialist Hamrén has worked for the HVAC specialist since 2006, covering regions including Eastern Europe and Nordic areas, and will bring his years of experience to the new role to provide valuable support in the burgeoning market in Turkey.

The providers of the system, SevenCs inform that after a series of trials with different Portable Pilot Units (PPU) the Portsmouth Pilots have selected ORCA Pilot G2 as their navigation tool of choice. The new software is produced by SevenCs, the leading maritime software development company for navigation and chart production. With Centerprise International as the local distributor for the UK, customers can rely on a strong partner with a proven track record for governmental and public service IT projects.