UK Prime Minister Theresa May reshuffled the cabinet replacing John Hayes as the shipping minister with Jo Johnson. Later the government sources confirmed that Jo Johnson was appointed Minister of State at the Department for Transport and Minister for London on 9 January 2018. Jo was Minister of State for Universities, Science, Research and Innovation from July 2016 to January 2018. He was elected Conservative MP for Orpington in May 2010 and re-elected in May 2015. May announced her intention to refresh the cabinet last week.

Maritime U.K. and the Department of International Trade (DIT) will lead a three-day trade mission to Shanghai at the end of March to promote the U.K. as a center for global maritime business. Attended by senior industry and government leaders from both countries, including Shipping and Ports Minister, John Hayes MP, and Trade Minister, Mark Garnier MP, the mission has been timed to coincide with the RMS Queen Mary 2’s visit to Shanghai during its East Asian tour. The iconic vessel will be used to promote U.K.

Dr. Nikolas Tsakos of Tsakos Energy Navigation Ltd. was reelected for two further years by the INTERTANKO Council who met this week in London. The Council members also engaged in dialogue with the IMO Secretary General, Kitack Lim, as well as the Rt Hon John Hayes CBE, Minister of State (Department for Transport). Lim, who has been Secretary General since January 2016, expressed his positive views about the contribution of INTERTANKO to the regulatory process at IMO: “The contribution made by INTERTANKO to the regulatory process at IMO has been of tremendous value over many decades.

U.K. A call to government and industry to secure support, training and work opportunities for U.K. seafarers, the Charter for Jobs is self-described as an “SOS to deliver on promises made during the referendum debate and prioritize jobs, skills and a decent future for U.K. Questioned by Nautilus about the lack of British seafarers on the U.K.-flagged ro-ro containership Atlantic Star, which was christened in Liverpool last week, the minister said he had taken the issue up with Atlantic Container Lines and had urged the company to be a model for U.K. employment and training.

U.K. Transport Minister John Hayes MP visited the Port of Liverpool Thursday, October 20, 2016 to view the final stages of work on phase 1 of the Liverpool2 container terminal ahead of its official opening next month. The visit provided an opportunity for the Minister to view progress since his previous visit in 2014 and to discuss with Peel Ports the importance of government investment in local infrastructure to help maximize the terminal’s contribution to the U.K. economy. The Liverpool2 project forms part of a wider £750 million investment program into biomass…

The countdown to London International Shipping Week 2017 (LISW17) officially began last night with an exclusive launch reception held at the iconic Norton Rose Fulbright building on London’s South Bank. The launch reception brought together representatives from many of the maritime world’s leading organisations and figures from UK Government to learn of the aspirations, plans and exciting opportunities that LISW17 will deliver between September 11-15, next year. Addressing the 130 invited guests…

Maritime UK congratulated the recipients of the Merchant Navy Medal for Meritorious Service announced today by the Minister for Shipping, Rt Hon John Hayes MP. David Dingle CBE, Chair of Maritime UK remarked; “Congratulations to all of the well deserving recipients – the new national award is fitting recognition of the dedication and achievements of the recipients and their service to the UK maritime industry. Recipients of the medal, have received the award for a range of meritorious service including: providing operational achievement through leadership…

Robert Goodwill, MP for Scarborough and Whitby, has been named as the UK’s new shipping minister. As Shipping Minister, he will have responsibility for completing the Maritime Growth Study. Earlier he was appointed as Parliamentary Under Secretary of State for Transport on Tuesday, but his specific duties within the department have been announced this week. He replaces John Hayes MP, who has held the position since July 2014 and has been moved to the Home Office. Goodwill will… 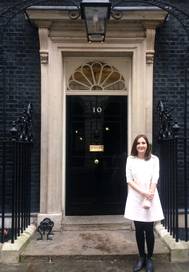 Mersey Maritime Apprentice Olivia (Livvy) Weston got a chance to visit No.10 Downing Street and the House of Commons after meeting the Shipping Minister, John Hayes, MP on an official visit. The 18-year-old Apprentice, who has been with Mersey Maritime since finishing her A-levels last year, spent a day in Westminster. She visited Hayes at the Department for Transport, watched a Parliamentary debate in the House of Commons and had her photo taken in front of the famous black door of No.10 Downing Street. Former Halewood Academy pupil Livvy said, “I felt very privileged meeting Mr.

Minister for Transport, Tourism and Sport Paschal Donohoe T.D., announced today that he has agreed arrangements with his U.K. counterpart, Minister John Hayes MP, for light dues paid by ships coming into ports in Ireland and the United Kingdom from April 2015. Light dues fund the Aids to Navigation (lighthouses, buoys, beacons and radio aids) operated by the Commissioners of Irish Lights (CIL) in Ireland, and by Trinity House and the Northern Lighthouse Board in the U.K. The three lighthouse authorities…

The “hard work and dedication” of a 25-year old Merchant Navy officer cadet has been recognized with an award that will be presented by the U.K. Shipping Minister at a ceremony in London tomorrow, Wednesday, October 15, 2014. Jonty Turnbull of Blackpool and the Fylde College, who was serving on-board the Foreland Shipping-owned vessel, MV Hartland Point, is the 2014 winner of the Maritime and Coastguard Agency’s (MCA) Officer Trainee of the Year Award. The award will be presented at Haberdashers Hall… 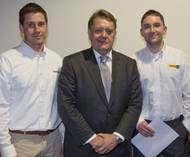 To mark this year’s National Apprentice Week (6 – 10 February 2012), Finning Power Systems (Finning), the UK’s sole supplier of Caterpillar marine engines, is announcing that places are now available for its next intake of marine apprentices. The company is seeking young, enthusiastic talent to join its long-established marine apprenticeship scheme; a scheme that has been offering young people in the UK the opportunity to develop their engineering skills since the early 1960s.