Capt. Jim Downey, DDG-1000 program manager at Naval Sea Systems Command, explains. DDG-1000 is a multi-mission destroyer. It covers surface, sub-surface, as well as air warfare areas. Its real focus is in the littorals, providing volume fire support in the littorals, as well as support to special operations areas. Volume fire support comes from significant gun systems on the ship to provide support right to ground forces and precise targets ashore to help the Navy and those ground forces in that type of combat area.

Raytheon Company deliver more than 6-million lines of software to the U.S. Navy for the DDG 1000 Zumwalt-class destroyer program. Part of the Total Ship Computing Environment (TSCE) -- the integrated mission system for the DDG 1000 class -- the software delivery supports ship activation and combat system testing, set to commence this year. The magnitude of this software development program is recognized as one of the most complex in the history of the U.S. Navy. TSCE continues to achieve all critical readiness milestones on schedule… 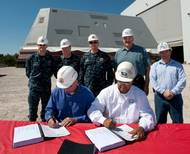 Huntington Ingalls Industries Shipbuilding delivers the 900-ton deckhouse structure to house the ship's bridge, radars, antennas & intake/exhaust systems. The deckhouse is designed to provide a significantly smaller radar cross-section than any other ship in today's fleet. Ingalls is building the composite deckhouse and hangar for the DDG 1000 class at the company's Composite Center of Excellence in Gulfport. Made almost exclusively using cored composite construction processes, the deckhouse and hangar take full advantage of the properties of carbon fiber materials and balsa wood cores.

On November 17, 2011, General Dynamics Bath Iron Works celebrated the keel laying of Zumwalt (DDG 1000), the first ship in the planned three-ship Zumwalt class of guided-missile destroyers. The keel unit is the 4,000-ton, heavily outfitted mid-forebody section of the ship, which was moved from the shipyard’s Ultra Hall construction facility onto the building ways in late October. The ship is named for ADM Elmo Zumwalt (1920-2000), regarded as the father of the modern Navy. He…

The U. S. Navy has awarded General Dynamics Bath Iron Works, a subsidiary of General Dynamics (NYSE: GD), a $1.8 billion contract for the construction of DDG 1001 and DDG 1002, the next two ships in the Zumwalt-class program. DDG 1001 is scheduled to be delivered in December 2015 and DDG 1002 is scheduled to be delivered in February 2018. "This contract enables us to maintain a strong base of quality shipbuilding jobs in Maine and continue our contributions to sustaining the U.S. Navy fleet," said Jeff Geiger, president of Bath Iron Works.

Converteam in partnership with the U.S. Navy have successfully tested the DDG 1000’s high voltage Integrated Power System (IPS)(1) to full power at the Land Based Test Site located in Philadelphia, Pennsylvania. DDG 1000 is the first U.S. Navy surface combatant to leverage this technology—an all-electric architecture providing electric power for both propulsion and ship services. As the integrated power systems provider, Converteam is responsible for the entire program’s high voltage system design, commissioning and testing at the land based test site.