The former chairwoman Choi Eun-young (55) of the now-defunct Hanjin Shipping was jailed 18 months for insider trading, reports Yonhap. According to the report the Seoul Central District Court found Choi  guilty of selling off her family-stake in the shipping company days before it declared a court-led debt restructuring plan. She was also fined with USD 1.09 million. The court said, although her charges are grave enough to deserve a heavy punishment, it considered that the stake…

South Korea’s Hanjin Shipping is planning on submitting a self-rescue plan to creditors this week to stave off bankruptcy by Aug. 25, reports Korea Herald quoting local media. According to the shipper, the plan includes details on securing funds from its parent Hanjin Group and cutting charter fees from foreign vessel owners. According to Pulse, Hanjin Group is expected have stronger units like Korean Air help out their troubled affiliate Hanjin Shipping through new share purchase and negotiate for cut in charter fees to up to 28 percent to normalize the country’s largest cargo carrier.

No Clues on Hanjin's Financial Health

Cash-strapped Hanjin Shipping Co. sources say that the negotiations with tonnage providers for lower rates are undergoing, but wouldn't say much else. According to Korea Herald, the country's No.1 shipping line has come under growing pressure from its creditors to secure more money to tide over a deepening cash shortage. Hanjin Shipping has proposed raising some 400 billion won ($353 million) via stocks sales to its affiliates, but creditors want the shipping firm to jack up the figure to some 700 billion won.

Creditors May Give Breathing Room for Hanjin Shipping

State-run Korea Development Bank and other creditors are expected to extend their conditional debt rescheduling program for Hanjin Shipping Co. to stay afloat, reports Korea Herald. This move will give the struggling shipping company enough time to cover liquidity shortage on its own. The ailing company still needs to raise about 1 trillion won ($875 million) to keep afloat. According to sources, KDB may extend the initial Aug. 4 deadline by a month  until early September. It is likely for the main creditor bank to vote for allowing more time for the shipper’s preparation…

South Korea's largest shipping line Hanjin Shipping has sold its entire 21.3% stake in Tan Cang Cai Mep International Terminal (TCIT)  in Vietnam to its affiliate in order to secure liquidity. The financially-troubled shipping line will raise about  $33m from the sale. The move came after the government and creditors, led by state-run Korea Development Bank, pushed Cho Yang-ho, the chairman of Hanjin Group, to pour more cash to the ailing shipping arm of the company. TCIT is a joint venture company of Saigon Newport Corporation with Hanjin, Mitsui OSK Lines and Wan Hai as partners.

Prosecutors on Sunday sought the arrest warrant of the ex-chairman of Hanjin Shipping, who has been hit with insider trading charges, says Yonhap. Choi Eun-young is specifically charged with violating the Financial Investment Services and Capital Markets Act, according to prosecutors probing the case at the Seoul Southern District Prosecutors' Office. The 54-year-old and her two daughters allegedly sold their stockholding in the Korean line for about  about 1 billion won (US$857…

Hanjin Shipping May Get OK for Restructuring

A report in WSJ says that Hanjin Shipping Co has applied for a creditor-led debt restructuring to avoid bankruptcy, reviving talk of a possible merger with rival Hyundai Merchant Marine Co. (HMM). It could be merged as a part of the government-led restructuring of ailing industries and companies, according to government sources. Both Hanjin Shipping Co. and Hyundai Merchant Marine Co. (HMM) are in hot water, but they are different from each other in a debt structure. Unlike HMM…

South Korea’s Hanjin Shipping Co. Ltd will work with lenders to restructure debt after years of weak demand resulted in losses and cash erosion, reports Bloomberg. The board of Hanjin Shipping decided to file for receivership and give creditors authority to manage the company, bowing to calls from the government and its main creditor Korea Development Bank (KDB) which asked Cho to accept heavy restructuring of the company. "Board directors of Hanjin Shipping decided to give up their management control for debt restructuring," said a KDB spokesman.

Hanjin Group opened its creative economy innovation center in Incheon on Wednesday, hoping to develop the city into a distribution hub of Northeast Asia utilizing advanced shipping technologies. As part of the center, Hanjin created a fund worth 159 billion won ($138 million), with about 94 billion won to be used for loans to companies starting smart distribution businesses. President Park Geun-hye, Hanjin Group Chairman and CEO Cho Yang-ho and Incheon Mayor Yoo Jeong-bok attended the opening ceremony, held at the center’s location in Songdo, Incheon. 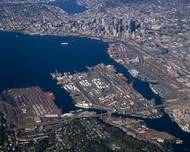 The Port of Seattle Commission approves lease extension with Total Terminals International (TTI), a J/V subsidiary of Hanjin Shipping & Terminal Investment Limited (TIL). The ten-year lease extension will secure continued volume and revenue at Terminal 46 for the next 13 years, through 2025. Hanjin Shipping, headquartered in Seoul, South Korea, is a subsidiary of the Hanjin Group, a large transportation conglomerate that includes Korean Air Lines. Hanjin is the largest container line in Korea and the 8th largest worldwide.