Marine Terminals Corporation – East (Ports America), Ceres Marine Terminals Inc. (Ceres), and SSA Atlantic LLC (SSA) have formed a joint venture, Charleston Stevedoring Company LLC (CSC), to provide container terminal and stevedoring services in the Port of Charleston in South Carolina.Working in close coordination and with the support of South Carolina Ports Authority (SCPA), CSC will enable the most efficient use of the Port of Charleston’s terminal assets and resources dedicated to serving the thriving and growing Southeast market.

Swedish multinational power company Vattenfall said that it had reached a number of important milestones during the year 2019. In Denmark the Horns Rev 3 (407 MW) wind farm was inaugurated, and construction was started on Kriegers Flak (605 MW), said European energy company."In the Netherlands we had the winning tender for Hollandse Kust Zuid 3&4 (~750 MW). We will develop and operate this project together with the first stage, Hollandse Kust Zuid 1&2, entirely without subsidies… 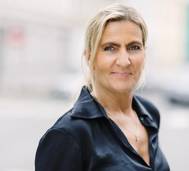 Nor-Shipping has appointed Sidsel Norvik to the new role of Commercial Director. Norvik joins following a stint as CEO of Energy Show Norway, two decades as Commercial Director for Upstream, and 10 years with Recharge, a news platform for renewable energy. Norvik will now be charged with working on exhibition sales and spearheading Nor-Shipping’s ground-breaking Blue Economy Hall, promoting the ‘Blue Talks’ and showcasing firms and ideas that accelerate innovation, competency and sustainable business opportunities.Nor-Shipping 2021 takes place at the 22,500 sq.

Norwegian shipbuilder and ship designer Ulstein is currently carrying out the paint work on Bernhard Schulte’s new service operation vessel (SOV), the 'Windea TBN'.The SOV, which was launched on 15 October 2016, for the offshore wind industry was docked into our dock hall on 8 December 2019.The hull of the vessel arrived Ulstein Verft in September 2019 and in the last few months the work has been focused on accommodation, electrical installations, painting of technical areas and outfitting.After the hull had been towed into the dock hall…

The region’s largest pump distributor and one of the few remaining British pump manufacturers – Tomlinson Hall – has paid recognition to its long serving staff as it celebrates 100 years in business.Based in Billingham, impressively almost 65% of the company’s staff – comprising 25 members - have been with the business for more than 10 years. The firm chose to recognize its team members loyalty in a ceremony following its commemorative Royal visit from His Royal Highness The Duke of Gloucester KG GCVO last month.Tomlinson Hall staff recognized for their efforts to the business included…

More than 300 executives from the maritime industry, government and academia filled the conference hall at SUNY Maritime as the State University of New York Maritime College and the Maritime Industry Museum at Fort Schuyler jointly hosted "Offshore Wind Power: Planning For America’s Ocean Energy" today in New York.I was pleased to facilitate the lead panel entitled "East Coast Wind Farm Overview – Status of Industry,” a panel which featured executives from four of the leading companies which are investing and working to make offshore wind power a reality in the U.S.… 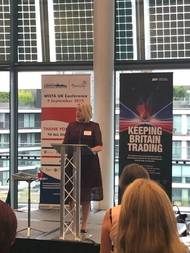 Associated British Ports (ABP), the UK's largest port operator, teamed up with the Women in International Shipping and Trade Association (WISTA UK) to organize a reception to promote the ongoing effort to drive gender diversity across the maritime industry.The event celebrated the progress made to date and discussed ways to accelerate this momentum, it said.Set in London's iconic City Hall building during the first day of London International Shipping Week (LISW), London's premier shipping industry conference…

The Port of Oakland, a major container ship facility located in Oakland, California, in the San Francisco Bay, said that its Commissioners have approved an air quality plan intended to drastically cut diesel and greenhouse gas emissions resulting from the Port’s maritime operations.Christened as "Seaport Air Quality 2020 and Beyond Plan", it envisions a zero-emissions operation in the future. The Oakland Board of Port Commissioners voted last week to approve the 259-page plan.The Port said that the plan would provide a framework for maritime development for the next 30 years.

Europe's logistics services provider Neele-Vat Logistics and the Port of Rotterdam Authority have signed a contract for the development of a distribution centre on the last vacant lot at the City Terminal site near Eemhaven (Heijplaat-Rotterdam).According to a press release, the logistics service provider will be using the new distribution centre for ‘cross-docking’: unloading cargo from an incoming transport unit and combining it with other cargo which is then loaded onto an outbound transport unit.

At its Nor-Shipping press conference in Oslo, DNV GL - Maritime CEO Knut Ørbeck-Nilssen emphasized the classification society’s dedication to maritime safety. Although shipping losses have declined over the last decade, challenging markets, demanding environmental regulations, and new technologies threatened to pull the industry’s focus away from marine safety, he said.“In a time when shipping is rapidly transforming, I believe it is crucial to put our primary focus on safety…

The rail freight company in the United Kingdom, GB Railfreight has launched a new intermodal rail freight service connecting the Port of Felixstowe with the Birch Coppice terminal in the Midlands.The first locomotive on the service left Birch Coppice at 14:14 on 23 January 2019 and arrived at Felixstowe at 20:14, having passed through Hams Hall, Leicester, Peterborough and Ipswich along the way. Made up of 33 platforms, the service transports a mixture of intermodal containers…

In 2017, Jan-Peter Hein of the Hamburg Port Authority made an unusual find in an attic on the company premises: files full of historical documents and photos of the St. Pauli Elbtunnel, the first ever river tunnel in Europe.The St. Pauli Elbe Tunnel, also called the Old Elbe Tunnel, was considered a technical sensation when it opened in 1911. Today, it is a protected monument and a nostalgic piece of Hamburg history.An exhibition showcasing the uncovered historical documents and photos was created so that the public can experience the history of the St. Pauli Elbtunnel.

Global ports operator DP World and industrial engineering firm SMS Group announced "Boxbay", a new and 'smart' shipping container storage system that aims to change the way that containers are handled in ports.The patented design and rack structure of the system creates unique advantages with containers stored up to eleven stories high, delivering the capacity of a conventional terminal in a third of the surface area.By being fully automated it has direct access to each container, eliminating unpaid and unproductive reshuffling.

Their Majesties King Willem-Alexander and Queen Máxima of the Netherlands called at MV WERFTEN’s Rostock facility in the course of their working visit to Mecklenburg-Vorpommern. They were accompanied by the Dutch Infrastructure Minister Cora van Nieuwenhuizen and the Minister-President of Mecklenburg-Vorpommern Manuela Schwesig. The Dutch royal couple’s working visit serves to cultivate and further intensify relations between the two countries.Hundreds of shipyard employees lined up to give the royal visitors a warm welcome on their arrival at the shipyard.

Asuka II, operated by NYK Cruises Co. Ltd., will undergo a 45-day makeover at the Sembcorp Marine Admiralty Yard in Singapore from the middle of January 2020. Asuka II is the nation’s largest cruise ship flying the Japanese flag (tonnage: 50,142 GT; capacity: 872 passengers).Features to be added during the dry dock include a large open-air bath, Western-style rooms featuring traditional Japanese-style tatami-mat sleeping areas, and a reading lounge where guests can enjoy a little quite time with books, smart devices, and computers.

The latest Seafarers Happiness Index report, published by The Mission to Seafarers, has revealed that seafarers working onboard cruise ships and ferries rank among the unhappiest in the industry.The report, which is produced in association with leading mutual P&I insurer the Shipowners’ Club, is based on the responses of thousands of seafarers across the global maritime industry. The latest report showed that cruise and ferry crews had an average score of 5.3/10 on their general happiness level - 15 per cent less than the global average across all vessel types…