Gibdock has underlined its commitment to Occupational Health & Safety by becoming the first shipyard in the Mediterranean region, and one of the first companies worldwide, to achieve ISO 45001:2018 certification.An audit by LRQA completed on July 6 confirmed that the Gibraltar shipyard is fully compliant with the requirements of the new ISO standard, which was only published in March this year. ISO 45001:2018 replaces the previous standard, OHSAS 18001. Organizations certified to OHSAS 18001 have three years to migrate to the new standard before the old one is withdrawn in March 2021…

Gibdock has continued to see its stock rise amongst the German shipowner community over the past year. Indeed the Gibraltar ship repair yard’s recent client list reads like a ‘Who’s Who’ of leading German shipowners and managers, underlining the fact that it enjoys a very positive reputation in this particular market. German owners and operators that have recently docked vessels at Gibdock include Oscar Wehr, Reederei üngerhans, E.Oldendorff, Peter Döhle Schiffahrt, Brise Bereederung, Asterion Tankers, Ahrenkiel, OPDR, Hans Peterson, John T. 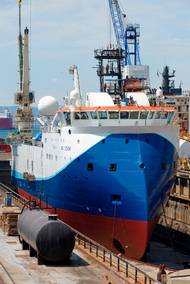 Gibdock completes a refit of the 12-streamer 3D seismic vessel 'WG Cook' for WesternGeco. WG Cook is one of six 12-streamer 3D seismic ships delivered to the owner in 2010. The 19-day project was completed on time and with no serious QHSE incidents in preparation for WG Cook’s deployment offshore Canada for a seismic survey. “The project was awarded on a competitive tender basis, while the location of the yard is also favourable for this project,” says Mick Richardson, WesternGeco Fleet Technical Manager.

Gibdock completed a complex propulsion system job, following the recent docking of the 57-ton bollard pull capacity Boluda group harbour tug Siroco. The 2001-built Siroco, which operates in the port of Algeciras, arrived in Gibraltar in early June for a one month docking that included the complete removal and overhaul of the two Voith Schneider Propeller (VSP) units onboard. As soon as the vessel was drydocked, it was jet washed with high pressure water and hand-scraped to remove marine growth in preparation for the VSP overhaul.

Solstad Offshore is redeploying two platform supply vessels as potable water and fuel oil carriers to service Brazil’s offshore rig market for Petrobras, after completion of a major conversion project at Gibdock. The four week project saw the 2006-built Normand Trym (3,326 dwt) in drydock and the 2008-built Normand Vibran (3,376 dwt) alongside at the Gibraltar yard, in order that mud tanks on each vessel could be converted to store 1500m3 of fresh water storage, with other tanks converted for 800m3 of fuel oil carriage.