President Bush Sails with Disabled aboard the Impossible Dream

Former President George HW Bush and First Lady Barbara Bush set sail today with the crew of the Impossible Dream, a unique catamaran designed for disabled sailors, a chance for the watermen and activists to thank the 41st President of the United States for signing the Americans with Disabilities Act (ADA) into law in the summer of 1990. The sailors were excited to be able to offer the President - a renowned boater - the opportunity to take the helm of this remarkable accessible vessel.

Mercy Ships, a global charity based in Garden Valley, Texas, operates the world’s largest civilian hospital ship. Mercy Ships founder Don Stephens was recognized this week with the Daily Point of Light Award from Points of Light, a U.S. organization dedicated to volunteer service. The national award was presented at a special event held at the River Oaks Country Club in Houston. The event, “Advancing Hope and Healing in Africa,” featured President George W. Bush and Laura Bush. 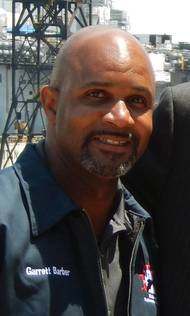 Huntington Ingalls Industries (HII) announced today that an employee at its AMSEC subsidiary was selected as the Senior Tradesperson of the Year by the Virginia Ship Repair Association (VSRA). Garrett Barber, a senior master tradesperson mechanic in AMSEC's elevator support unit division in Chesapeake, was recognized for his work aboard the aircraft carriers USS Theodore Roosevelt (CVN 71), USS Harry Truman (CVN 75) and USS George H.W. Bush (CVN 77). Barber was one of 10 nominees from 245 member companies in the VSRA… 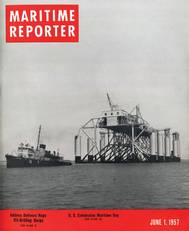 The History of Offshore Energy

Offshore exploration is a history of man v. Prospecting for oil is a dynamic art. From a lake in Ohio, to piers off the California coast in the early 1900s, to the salt marshes of Louisiana in the 1930s, to the first “out-of-sight- of-land” tower in 1947 in the Gulf of Mexico, the modern offshore petroleum industry has inched its way over the last roughly 75 years from 100 ft. of water ever farther into the briny deep, where the biggest platform today, Shell’s Perdido spar, sits in 8,000 ft. of water. As a planet, we have two unquenchable thirsts – for water and for oil.

Naval Aviation History in the Making Aboard CVN 77

New  American Wind Energy Association (AWEA) leadership takes helm with EDPR’s Gabriel Alonso chairing the board. Tom Kiernan to speak as incoming CEO. Generating a sense of electricity like the thousands of wind turbines in the region, the WINDPOWER 2013 Conference & Exhibition (May 5-8, 2013) officially came online in Chicago, a hub for the American wind energy industry. New leadership for the American Wind Energy Association (AWEA) is first being inducted, followed by a packed schedule of educational sessions and a dynamic exhibition covering the area of 11 football fields. 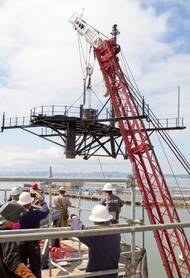 USS IOWA Takes on Iowa Coins, Regains its Mast, Prepares for its Final Journey; The Battleship of Presidents will open as an interactive naval museum in Los Angeles. The time-honored tradition of adding coins to the mast of a ship for good luck took place as two Iowans stood atop a 205-foot-tall platform and dropped Iowa state quarters into the mast of the USS IOWA as it hung from a barge crane. Former Iowa legislator Jeff Lamberti of Ankeny and Becky Beach of Des Moines released a handful of coins into the mast shortly before eight welders reattached it to the historic battleship.