Excelerate Energy announced it has agreed with partner Engro Elengy Terminal Ltd. (EETL) to expand the EETL liquefied natural gas (LNG) import terminal in Port Qasim, Pakistan.Under the heads of agreement (HOA), Excelerate will exchange its existing floating storage and regasification unit (FSRU) Exquisite with a newbuild FSRU, Hull 2477, which is currently under construction at South Korea's Daewoo Shipbuilding and Marine Engineering (DSME) shipyard and due to be delivered in April 2020.

The Asian liquefied petroleum gas (LPG) market stood at over $81.4 billion in 2018 and is projected to grow at a CAGR of over 5% to cross $109 billion by 2024, as increasing demand for LPG  as a fuel for power generation in remote and off-grid locations in comparison to its less environment-friendly alternatives like coal, diesel and fuel oil.Increasing demand for LPG used to run vehicles (Autogas)  is being witnessed as it is a comparatively cheaper automotive fuel and can be used in vast applications related to transportation… 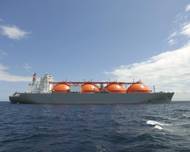 Plans by Australia's AGL Energy to start importing liquefied natural gas from 2021 will be delayed after the state of Victoria called for the company and its pipeline partner to submit a full environmental assessment of their project.The review process typically takes nine to 12 months, which means AGL will not be able to reach a final investment decision on the A$250 million ($178 million) jetty project by June 2019, as it had hoped.AGL had been on track to be the first of four…

US Aims to Start LNG Deliveries to Germany in Four Years

U.S. companies expect to begin delivering liquefied natural gas (LNG) to Germany in four years at the latest and will challenge Russia which now accounts for 60 percent of German gas imports, the deputy U.S. energy secretary told a German newspaper."U.S. liquefied natural gas is coming to Germany. The question is not if, but when," Dan Brouillette told the mass circulation daily Bild in an interview published on Monday.U.S. President Donald Trump in July accused Germany of being a "captive" of Russia due to its energy reliance and urged it to halt work on the $11 billion…

Germany's Uniper on Tuesday said it favors a liquefied natural gas (LNG) terminal at the Wilhelmshaven deep sea port on the North Sea coast, less than a week after peer RWE said it secured access to capacity should a rival project at Brunsbuettel go ahead."Wilhelmshaven in particular can be a suitable location, there are many arguments in favour of it," spokesman Leif Erichsen said in a written statement.He cited the port's ability to offer infrastructure for LNG vessels of all sizes and its proximity to the German long-distance gas pipeline grids and underground storage caverns in the norther

A working meeting between Alexey Miller, Chairman of the Gazprom Management Committee, and Maarten Wetselaar, Member of the Executive Committee of Royal Dutch Shell, took place in St. Petersburg. The meeting addressed relevant aspects of strategic cooperation. Particular attention was paid to joint efforts in the liquefied natural gas (LNG) sector. The parties discussed the construction project for the third train of the LNG plant on Sakhalin Island and the progress of the Joint Study Framework Agreement for the Baltic LNG project. The meeting also focused on the Nord Stream 2 project.

China has agreed take a 70 percent stake in a strategically important sea port in Myanmar, at the lower end of a proposed range amid local concerns about Beijing's growing economic clout in the country, a senior government official said. Oo Maung, vice chairman of a government-led committee overseeing the project, said Myanmar had pushed for a bigger slice of the roughly $7.2 billion deep sea port, in western Rakhine state, in negotiations with a consortium led by China's CITIC Group. Agreement was reached in September, he said.

Greece's state controlled natural gas firm DEPA signed a cooperation agreement on Thursday with natural gas company Gastrade to participate in the development of a liquified natural gas terminal in northern Greece, DEPA said. Greece currently has one LNG terminal on an islet off Athens. Gastrade, part of Greek energy group Copelouzos, is planning a second LNG terminal near the northern city of Alexandroupolis. The project has been described as a 'project of common interest' by the European Union.

A group of leading business houses in Pakistan plan to build a liquefied natural gas (LNG) terminal by March 2019 for gas processing and consumption in their own plants, Reuters reported. The proposed, second multi-million dollars terminal being set up at the Port Qasim to handle LNG imports will give tremendous boost to LNG trade. The private terminal will bring the total number of potential LNG import projects in the country to eight. Currently, Pakistan has only one active…

Snam in Talks to Buy LNG Terminal Stake from Edison

Italian gas group Snam is in exclusive talks with EDF's Italian unit Edison to buy a stake in a liquefied natural gas terminal in northern Italy as part of plans to develop its LNG business, two sources said. Snam, controlled by state lender Cassa Depositi e Prestiti, is looking to buy Edison's 7.3 percent stake in Terminale LNG Adriatico and the gas pipeline that connects it to Italy's gas transmission backbone, the sources said. Adriatic LNG, which has a capacity of 8 billion cubic metres per year, is 70.7 percent owned by ExxonMobil and 22 percent by Qatar Petroleum.

Ports in Saudi Arabia and the United Arab Emirates' barred ships flying Qatari flags after the two countries broke off diplomatic ties with Doha, in a move that raised fears of disruption to oil and gas shipments from the Gulf OPEC member. The Saudi Ports Authority has notified shipping agents not to accept vessels flying Qatari flags or ships owned by Qatari companies or individuals, it said on its Twitter account on Monday, adding that Qatari goods would not be allowed to be unloaded in Saudi ports.

Officials in Karlshamn in southern Sweden will allow Russia's Gazprom to use the city's port for the construction of its Nord Stream 2 gas pipeline after the government dropped its objections, the municipality said on Tuesday. The government had earlier expressed concerns about Gazprom's plans to use the port, but said on Monday the project did not threaten defense interests. Late last year, the island of Gotland rejected a similar deal to support the construction of the pipeline after the government expressed worries about national security.

Sweden's government has dropped its objections to a plan by Russia's Gazprom to use the port of Karlshamn in southern Sweden as a base for the construction of its Nord Stream 2 gas pipeline, Swedish public radio reported on Monday. Officials in Karlshamn, on the Baltic sea, will take the formal decision on Tuesday, but are likely to vote yes to an agreement after the government tempered its previous objections to a deal. Late last year, the island of Gotland rejected a similar deal to support the construction of the pipeline after the government expressed worries about national security.

China's state-owned energy company CNOOC diverted two cargoes of imported liquefied natural gas (LNG) after a pipeline fire in northern China's Tianjin, though imports were normal as of Monday, traders with knowledge of the matter said on Tuesday. Reuters reported on Dec. 28 that a natural gas pipeline in Tianjin was closed after it ruptured and caught fire. Two sources with knowledge of CNOOC's gas operations in Tianjin said CNOOC diverted the LNG cargoes after the accident on the pipeline, which is connected to a domestic gas consumer.

An Australian port and a stake in the Empire State Building's operator were among assets acquired by sovereign investors such as wealth funds and state pension funds in the third quarter of 2016, with deals totalling $21.2 billion. The combined value of deals was up 38 percent from the previous quarter, helped by a handful of jumbo-sized transactions in the infrastructure, energy and real estate segments, although the number of direct investments fell to 35 from 43 in the second quarter, according to data from Thomson Reuters.

Sunday July 10th 2016 the first shipload of liquefied natural gas (LNG) arrived at the Gasum’s subsidiary Skangas LNG terminal in Pori. To be completed in August, the facility is the first LNG import terminal in Finland. LNG was brought with the time chartered Skangas Coral Energy carrier from the North West Europe. The Skangas LNG terminal is undergoing commissioning, and commercial deliveries to customers will begin in September. LNG will help diversify the Finnish energy market…

Gazprom was announced the winner of the All-Russian Green Development – Evolution Awards 2016 in the Best Green Tech Solution category. The award was presented by competition committee chairman Sergey Donskoy, Minister of Natural Resources and Environment of the Russian Federation. The Company was awarded for developing and introducing technologies that ensure high energy efficiency and reduce specific greenhouse gas emissions. These technologies include the use of mobile compressor stations without venting gas to the atmosphere from the gas pipeline section under repair.

Royal Boskalis Westminster N.V. has won a contract from the National Petroleum Construction Company of Abu Dhabi, UAE for dredging work related to the installation of an offshore gas pipeline of the Abu Dhabi National Oil Company as well as to an existing offshore gas pipeline. Boskalis will dredge a more than 50-kilometre-long trench between Das Island and Ras Al Qila in onshore Abu Dhabi for the new pipeline installation. Dredging work is scheduled to commence in phases from this quarter onwards and is expected to be completed in the second half of 2017.