Publisher of maritime market benchmarks, the Baltic Exchange, has launched a new service for shipping investors which provides a snapshot five-year view of the financial prospects of dry bulk carriers.The Baltic Exchange Investor Indices are an easy to use online dashboard displaying data relevant to vessel investment decisions, residual value, health of earnings, spot and five-year timecharter earnings; purchase & recycling values; and running costs. It offers a high level of clarity and transparency for investors in capesize, panamax, supramax and handysize vessel types.

DNV GL has awarded an Approval in Principle (AIP) to Daehan Shipbuilding (DHSC) for a new design of small-size LPG carriers in the range of 5,000-7,000 DWT. The AIP handover ceremony took place recently at the DHSC headquarters in Mokpo. Dae-Seong Jeong, DHSC President & CEO, and Vidar Dolonen, Regional Manager Korea & Japan at DNV GL - Maritime, attended the presentation. Prior to the AIP, DHSC and DNV GL had teamed up in a joint development project (JDP) on small-size LPG carriers using LPG as dual fuel.

A joint research and development (R&D) project initiated by a group of Japanese maritime companies aims to utilize ammonia as a marine fuel and establish methods for the mass transportation and supply of ammonia.The joint R&D agreement signed by NYK Line, Japan Marine United Corporation and Nippon Kaiji Kyokai (ClassNK) on August 6 will target the commercialization of an ammonia-fueled ammonia gas carrier (AFAGC) that would use ammonia as the main fuel, in addition to an ammonia…

Lubricating duel-fuel auxiliary engines: a practical approachChevron Marine has released the latest in a series of white papers focusing on innovations and developments impacting the fast-changing shipping industry.Click Here to Download the Whitepaper.‘Lubricating dual-fuel auxiliary engines: a practical approach’ explores the unique challenge of using engines that run regularly on either fuel oils or LNG. Around three quarters of ships using LNG as fuel have dual-fuel, four-stroke engines.

A naming ceremony was held in Kumamoto Prefecture at the Ariake Shipyard of Japan Marine United Corporation for a new VLGC (very large gas carrier) that NYK will charter under a long-term contract to Astomos Energy Corporation,  pre-eminent liquefied petroleum gas (LPG) company.The ship was named “Lily Promenade” by Kazuhisa Otsuka, senior operating officer of Astomos Energy Corporation, and the ceremonial rope holding the vessel in place was cut by Mariko Kurokawa of Astomos.

Norwegian shipowner Ocean Yield ASA has agreed to acquire Navigator Aurora, a 37,300 cbm ethylene gas carrier owned by Navigator Gas.According to agreement, the ship will be purchased for a total consideration of USD 69.75 million net of a seller’s credit, with a 13-year bareboat charter to a company 100% owned and guaranteed by Navigator Holdings - Navigator Gas.The vessel is expected to be delivered to the Company during October 2019. Navigator Gas has certain options to acquire the vessel during the charter period.

ABS, the global provider of classification and technical advisory services to the marine and offshore industries, announced that it is collaborating with South Korean shipbuilder Samsung Heavy Industries (SHI) on a next generation LNG carrier in a joint development project (JDP) signed today at Gastech 2019.“ABS is a leader in gas carriers with a proud record of supporting innovation, delivering operational efficiencies and advancing the cause of safety. This exciting project with SHI for a state-of-the-art vessel represents the next step in that journey… 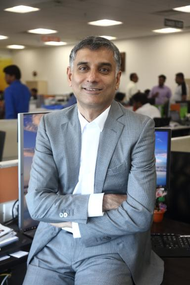 ClassNK  confirmed type approval certification for SMARTShip, a patented digital shipping solution developed by Alpha Ori Technologies (AOT).SMARTShip, an Internet of Things (IoT) platform that enables the onboard operation of multiple systems with varying degrees of autonomy, has already been installed on more than 30 vessels, with another 60 ships are at various stages of the set-up process.ClassNK’s certification for SMARTShip approves the solution as a ‘Computer Based System’ which conforms to the Class Society’s rules governing a product performing ‘Remote Monitoring and Diagnostics’…

The Very Large Gas Carrier (VLGC) freight rates started to recover towards the end of the first quarter as U.S. consumption reverted to seasonally lower levels pushing U.S. LPG prices down, widening the geographical LPG price arbitrage between the U.S. and the Far East.According to BW LPG, the owner and operator of liquid petroleum gas (LPG) vessels,  the recovery in VLGC freight rates was further strengthened by two occasions of fog and a temporary closure of the Houston Ship…

Johor Port Berhad has signed an agreement with Petronas LNG Ltd. to provide marine services for vessels that receive gassing up and cooling down (GUCD) services at PLL’s Regasification Terminal Pengerang.According to a press release from integrated multi-purpose port facility located at the southern tip of Peninsular Malaysia, the signing of the Marine Services Agreement by Johor Port Bhd and PPL enables the provisioning of marine services and attractive tariff for vessels that…

French cargo and cruise port Marseille Fos had a relatively stable year in 2018 with traffic of more than 81 million tonnes, up 1%.The performances included a seventh consecutive year of growth in container traffic, which rose 2% for 1.4 million teu, and a 12% increase in dry bulks at 15.2MT. Meanwhile cruise numbers leapt 15% to 1.7 million passengers.Infrastructure development and maintenance spending of €60 million featured further logistics park expansion. Alongside this, agreements were reached on major industrial implantations.

Greek gas carrier owner and operator TMS Cardiff Gas has signed additional contracts with Hyundai Heavy Industries (HHI) & Samsung Heavy Industries (SHI) of Korea for the construction of 174,000 cubic meter LNG carriers with XDF propulsion. The Greek corporation said that this order is the latest in the Company’s X Carrier Series of orders taking the tally of X Carriers Series within the fleet to eleven. The Company’s fleet of managed vessels has grown to sixteen. The vessels are scheduled for delivery in 2020/2021…

Kongsberg Digital (KDI) will deliver to GasLog a comprehensive liquefied natural gas (LNG) simulator package designed to enable new levels of safety and operational training for the owner/operator’s professional crews.GasLog operates 27 LNG vessels through its subsidiary, GasLog LNG Services and has seven ships currently on order. The KDI contract represents a commitment and investment on GasLog’s part to provide a high-level training environment for their crews, solely focused on LNG operation.The scope of supply is based on an integrated…

Samsung Heavy Industries(SHI) revealed on April 4th that a contract for two 174,000㎥ LNG carriers on BOD approval term. The price is 184 million USD per vessel(around KRW 195 billion). The latest LNGCs would be delivered in July and October 2020. The contract comes with option for two. The LNG carriers would be equipped with Mark-Ⅲ Flex type containment system with re-liquefaction to lower BOG. The vessels are loaded with fuel saving technologies customized for the owner's operational needs.

DryShips to Spin Off of Its Gas Carrier Business

South Korean shipbuilding giant Hyundai Heavy Industries (HHI) has won a design contract worth about $500 million for a liquefaction unit to be used for Steelhead LNG’s Kwispaa LNG export project in Canada’s British Columbia, reported Yonhap. Hyundai Heavy will conduct a front-end engineering design (FEED) for the hull of the At-Shore LNG (ASLNG) and build the LNG liquefaction facility for Steelhead LNG Corp., the company said in a statement. The ASLNG facility, scheduled to begin operations in 2024 on the coast of Vancouver…

DryShips, a diversified owner of ocean going cargo vessels, announced today that it has taken delivery of its fourth high specification very large gas carrier (VLGC) newbuilding. The VLGC will be employed under a fixed rate time charter with ten years firm duration to an oil major trading company. The Company expects a total gross backlog associated with this time charter of up to $103.8 million. DryShips has now taken delivery of all of the 17 vessels it has  acquired since the beginning of 2017.